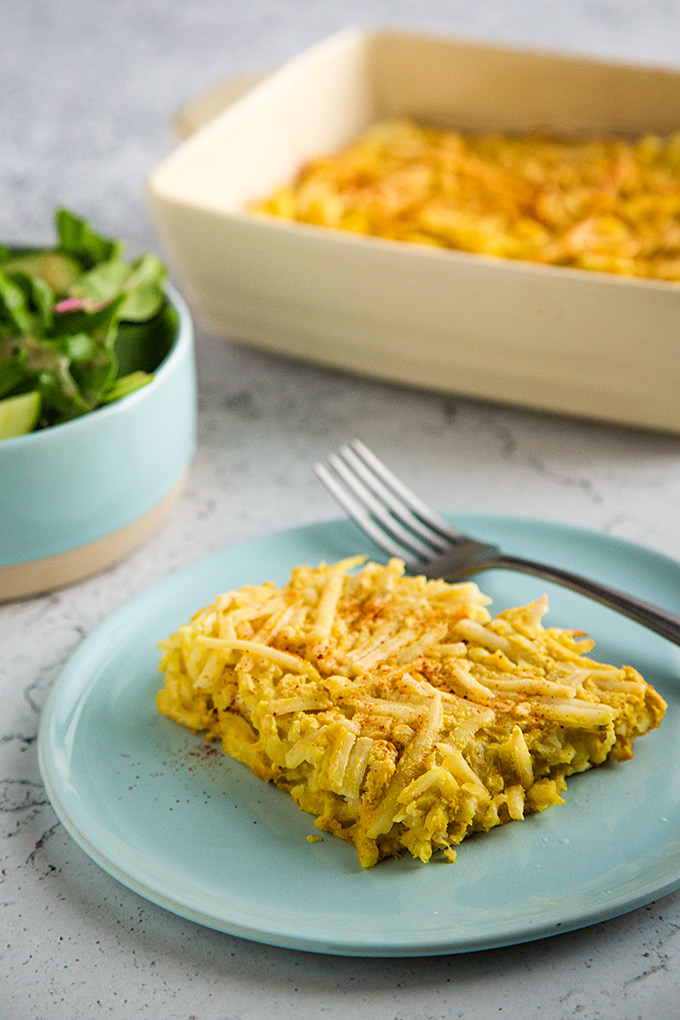 These easy scalloped potatoes combine the creaminess of the classic side dish with the ease of frozen hash browns. You don’t even have to thaw them out!

I thought I was finished writing about scalloped potatoes. I posted my first scalloped potatoes recipe in my second month of blogging, way back in 2006. Then ten years later I updated that recipe with a “cleaner” recipe that used chickpeas instead of cornstarch for thickening.

Well, I hadn’t anticipated that Julie from the 100% Pure McDougall Facebook group would come up with a brilliant innovation on the original recipe. She skipped right past the slicing and boiling of two pounds of potatoes and simply poured the sauce over frozen hash browns. No fuss, no mess, no thawing! I thought I had made my chickpea version easy by having the potatoes cook in the sauce, but Julie’s method made scalloped potatoes ridiculously easy. When she posted about it in the group, I knew I had to give it a try. 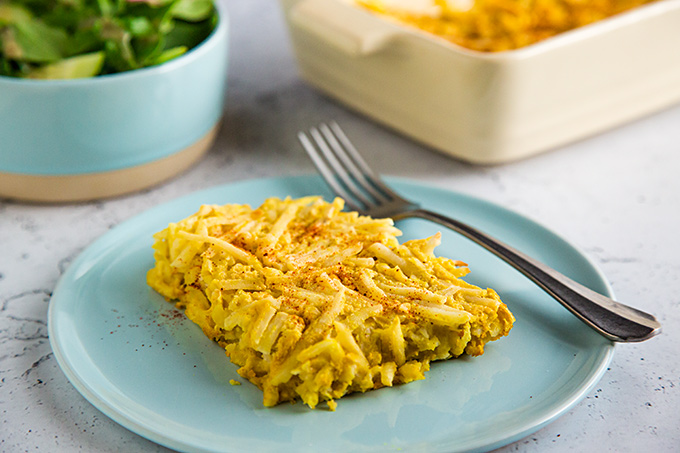 I ordered a large bag of frozen hash browns (26 ounces) during my weekly grocery order, and made scalloped hash browns as a side dish one night when my family was having a “fend for yourselves” supper (basically, we each make our own sandwiches.) Usually I make air fried potatoes on these occasions, so my daughter was very confused to see me pouring something from the blender over hash browns. But she had to admit that the resulting hash brown casserole was really delicious and a nice change from our usual french fries. 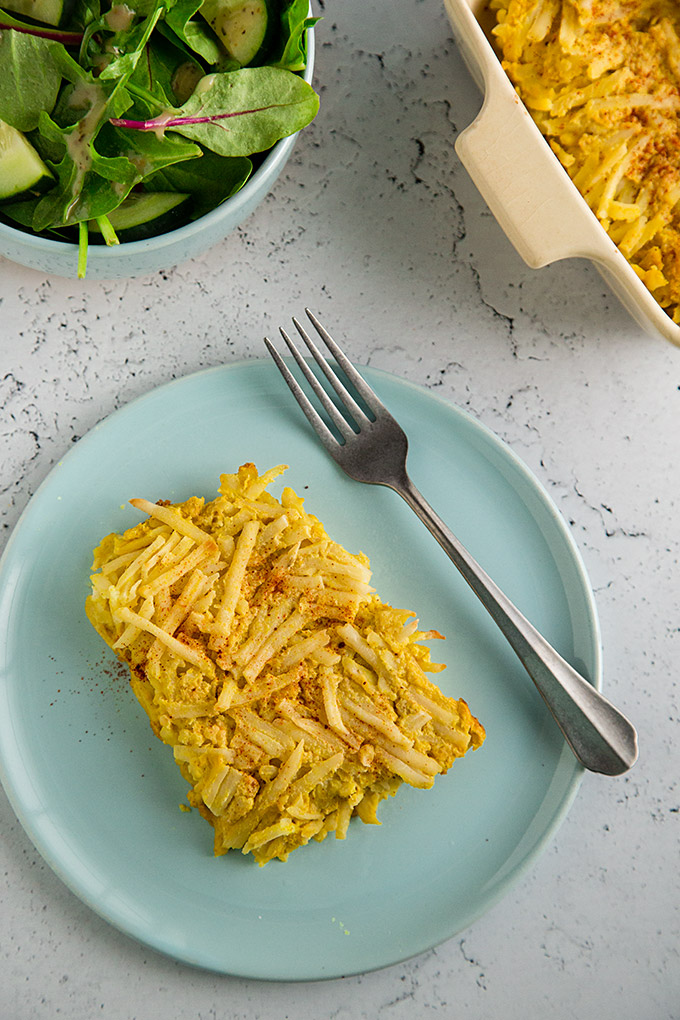 Of course, I like to tinker with things, so I did update the seasonings a little. Smoked paprika wasn’t on my radar in early 2006, but these days I buy it by the bagful and enjoy its sultry smokiness in cheese sauces. And I added a little turmeric just for the color. It’s still a very mild sauce, so if you like your cheese sauces on the bold side, consider adding some cayenne or chipotle pepper along with the other seasonings.

The next day, I had some of the leftover casserole as a light lunch with a green salad, and amazingly it tasted even better after setting up overnight. I just sprinkled it with a little water and warmed it in the microwave.

Thank you to Julie for coming up with this innovation. It’s transformed vegan scalloped potatoes from a special occasions dish into a ridiculously easy casserole that I know we’ll be enjoying regularly.

Happy Holidays to all! 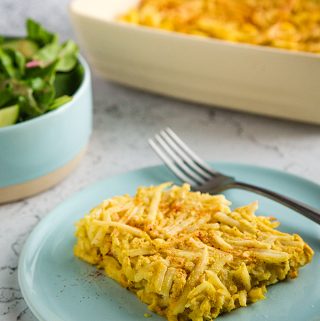 This delicious vegan side dish combines the creaminess of scalloped potatoes with the ease of frozen hash browns. You don't even have to thaw them out!
Prep Time 10 minutes
Cook Time 40 minutes
Total Time 50 minutes
Servings 8
Author Susan Voisin

Course Side Dish
Cuisine American, Vegan
Keyword fatfree hash browns, vegan cheese sauce, vegan scalloped potatoes
Have you made this recipe?Mention @SusanFFVK and tag #fatfreevegankitchen in your photos on Instagram.
Share on Facebook Pin This Recipe Share by Email 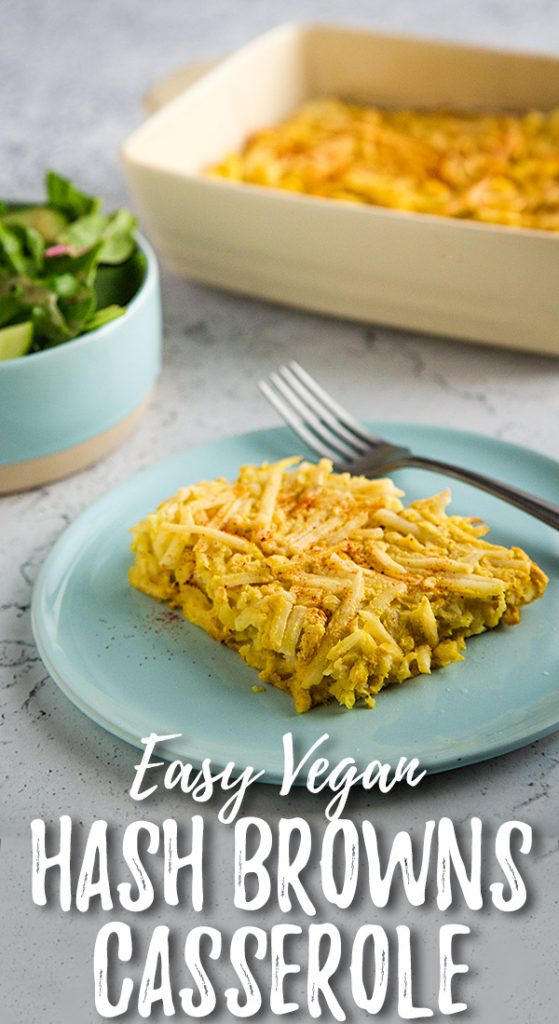