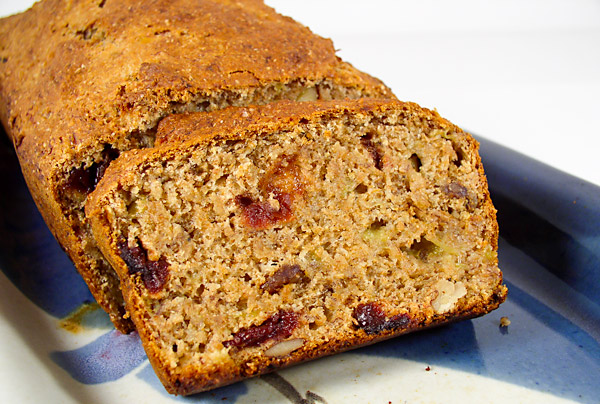 What do you do when the bananas are so over-ripe that they’re practically inedible? In my house, there are basically two choices: freeze them for smoothies or make banana bread. So I put it to a family vote, and the response was unanimous: Banana Bread!

I’ve been making the same banana bread for years. The recipe comes from my dog-eared, much loved copy of Laurel’s Kitchen,

the very first vegetarian cookbook I ever bought.

I’ve adapted the recipe over the years, and the book’s margins show it. There are notes giving the nutritional values with oil and with butter (from before I was vegan) and with reduced amounts of oil and light margarine, for vegan banana bread. But there are no notes about completely eliminating the fat; I usually made the recipe for guests, and I tended to allow a little oil or margarine when cooking for others. 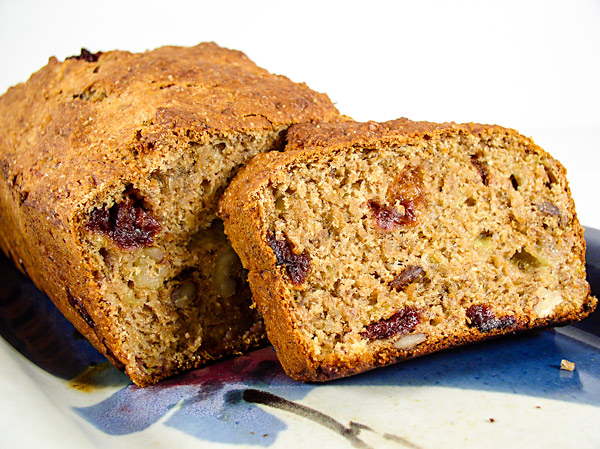 But I wanted to make it oil-free this time, so I looked for guidance in another old, but new to me, book that I picked up last week at an antique store: the 1994 edition of Fat-Free Baking

by Sandra Woodruff, RD. It’s not a vegan cookbook, but its recipes really are fat-free and many look to be low in sugar, too. So I looked at what I like about the Laurel’s Kitchen recipe and I looked at Ms. Woodruff’s recipe, and I sort of combined the two.

And then I threw in my own twist: dried cherries. This was a last minute decision on my part. I was trying to decide whether or not to include dates when I remembered that I had a package of dried cherries I’d bought to make Pop-Ems. So I threw them in. Feel free to throw them out, but be warned–you’ll be missing a treat if you do. The cherries add a wonderful sweet-tart taste to this vegan banana bread that you might not want to miss. 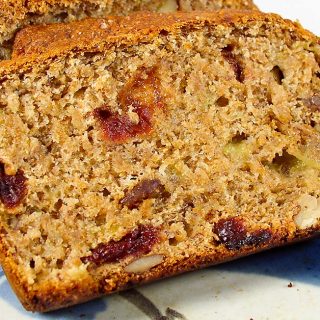 Check out these other delicious quick breads and cakes: