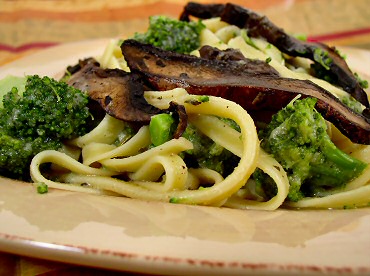 I was describing the Chickpeas, Potatoes and Green Beans in Cauliflower Sauce to some friends when it hit me that Cauliflower Sauce could be the best thing to happen to fatfree cooking since the invention of non-stick pans. A sauce made from cauliflower could be flavored in any number of ways, not just with Indian seasonings. And a good, creamy sauce with no fat, no soy, no gluten, no “bad carbs,” and all cruciferous vegetable could be a very handy and healthy addition to many different types of recipes.

I decided to test out this theory last night. I cooked the cauliflower as I had before, but this time I used less water (the potatoes in the last recipe provided substantial thickening that I needed to compensate for) and instead of curry leaves, coriander, ginger, and garam masala, I cooked the cauliflower with garlic, oregano, and basil. After the sauce was blended and seasoned to my liking, I tossed it with some fettuccine and broccoli and topped the whole thing with some sautéed mushrooms.

Folks, we have a winner! At least to my family. My daughter E. was heading out the door to a friend’s house, but she couldn’t resist the sight of pasta simmering on the stove. I dished her up a plate, and she wolfed it down in record time. I had to promise her that there would be plenty of leftovers when she got back–and that I would add it to her Kid-Friendly list.

The pureed cauliflower forms a light yet creamy sauce that moistens the pasta and broccoli, while the sautéed mushrooms add chewy texture and earthy flavor. Besides being a great way to sneak a vegetable into a meal, this just tastes good. Try it with your favorite blend of spices and let me know your results.

Copyright © Susan Voisin 2006. All rights reserved. Please do not repost recipes or photos to other websites.