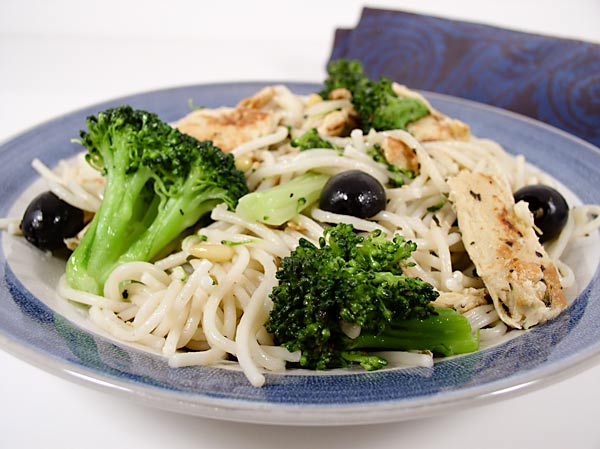 Yesterday was a long day. My daughter E. had her birthday party (two weeks late because of her hectic soccer schedule) at a local amusement facility. There were arcade games and ice skating as well as the ritual cake and birthday presents. I found out something the hard way: it’s almost impossible to get kids out of those places once you’ve allowed them in. Between the game tokens that absolutely must be used up that day and the standing in line to redeem game points for prizes, the party lasted a lot longer than we intended.

And, when we got home, we had one extra child with us: E. had invited her best friend to eat dinner and spend the night. The only problem was I had no idea what was for dinner and no energy for cooking. Fortunately, I had a package of the new Morningstar Farms Chick’n Strips* in the freezer for just such a situation. I’d never tried them before, and faux meats are not something I recommend eating frequently, but on this occasion, they really came in handy and turned out to be pretty tasty.

In this recipe I used a little more olive oil than I usually do, but it can be prepared with as little or as much as you want. The dish also contains black olives and pine nuts, so it’s fairly rich even without the oil. 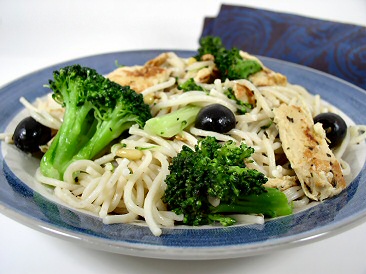 This "special occasion" recipe has added oil, so I do not recommend it for those following a low-fat diet. If you want to try it without oil, try substituting the liquid from cooked chickpeas, called "aquafaba."
Prep Time 10 minutes
Cook Time 15 minutes
Total Time 25 minutes
Servings 8
Author Susan Voisin

Since brands of faux chicken vary, the nutritional data below does not include it. It also excludes the olives and relies on one teaspoon of olive oil.
Nutrition Facts
Hasty Tasty Pasta with Broccoli, Olives, and Vegan Chicken
Amount Per Serving (1 serving)
Calories 271 Calories from Fat 22
% Daily Value*
Fat 2.42g4%
Sodium 41mg2%
Carbohydrates 25g8%
Fiber 4.9g20%
Protein 11g22%
* Percent Daily Values are based on a 2000 calorie diet.

This was very kid-friendly, and this time I have two kids’ opinions: Both of them ate two heaping plates apiece (and fought over the olives). The “chicken” was a pretty big hit and added an interesting texture to the dish. I thought that it was much softer than real chicken and didn’t really taste like chicken, but what do I know–I’ve been a vegetarian for 18 years, so it’s amazing that I even remember chicken! It was tasty, however, and picked up the garlicky flavor of the sauce just fine.

*The Morningstar Farms Meal Starters Chick’n and Steak Strips are two of the very few vegan products that Morningstar offers. Other “chicken”-type products can be used in this recipe, and, truthfully, I advocate buying products from a more vegan-friendly (and less multi-national) company, if you can.