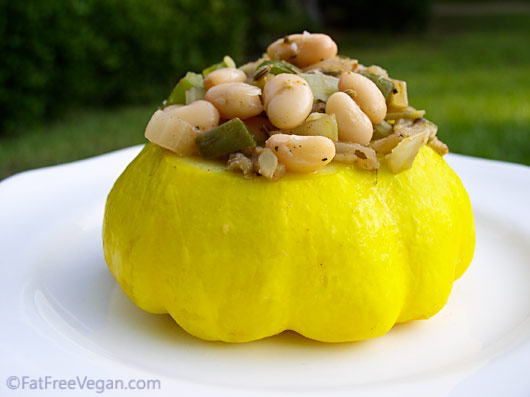 You would have thought I’d never seen fresh vegetables. My husband wanted to shop as men do: Get in, get something, and get out. But I dragged him from stall to stall at the farmer’s market, comparing the quality of the tomatoes and zucchini, sighing in disappointment that I’d gotten there too late to get the okra, and marveling at the beautiful produce that I can’t find at Kroger–bitter melons, long beans, white eggplant, and organically-grown yellow patty pan squash.

The squash were beautiful, and I wish I’d taken a photo of them before they were cooked: bright yellow with a ring of variegated green at the bottom. I knew when I bought them that I was going to stuff them. The man who sold them to me said to use sausage, and then remarked, “Every time I say that, I find out I’m talking to a vegetarian.” “You are again! You come across that many vegetarians?” “A lot of them. But you could use cheese instead.” 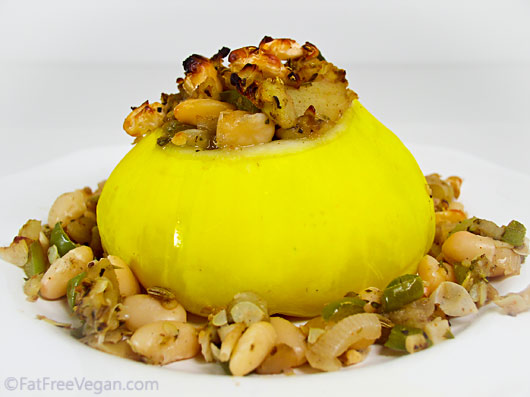 I let that go and started pondering what I, a no-refined-foods vegan, would use instead of sausage or cheese. How about beans that taste like sausage? With Cajun seasonings?

Oh boy! That was a good choice, and I knew it as soon as the fennel hit the pan. I started with all the seasonings that normally go into Louisiana cooking and added fennel and sage to create a rich, sausage-like flavor. There’s a hint of spiciness here, too, so go easy on the black and cayenne pepper if you’re spice-sensitive. But by all means, try it! The peppery taste of the beans provides a bold contrast to the tender, buttery squash. Patty pans are the perfect shape for stuffing, but if you can’t find them, you can use zucchini or a winter squash.

And a word to my carb-conscious friends: Patty pans are summer squash, so they’re low in calories and carbohydrates; they’re considered a “free” food on most diet plans, so eat up! 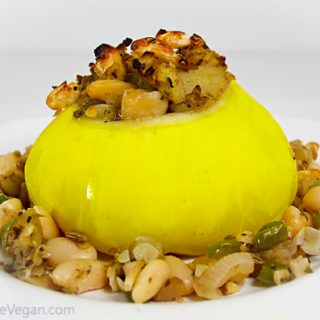