When I first started this blog, I vowed that I was going to write about the failures as well as the successes. I’ve been lucky. There have been some recipes that I would tweak here and there to improve them, but I haven’t had any out and out failures–recipes that I just couldn’t recommend. Until now.

Which is sad because I’d been thinking of making Pinakbet, a vegetable stew from the Philippines, for weeks. I’d found the recipe when I’d bought okra, fresh lima beans, and eggplant and searched all my cookbooks for a recipe that used all three. The only trouble was that the characteristic flavor of Pinakbet came from the one ingredient I didn’t have, bitter melon. So I decided that the recipe wasn’t worth making if I didn’t have the main ingredient, and I set it aside.

Then this weekend, I saw bitter melons at the Mississippi Farmer’s Market. I never would have guessed that anyone was growing them here, but there they were, along with long beans (for which I’ve always had to substitute regular green beans) and Japanese eggplants. I was so happy to see the bitter melons that I bought four, forgetting that the recipe called for only half of one. 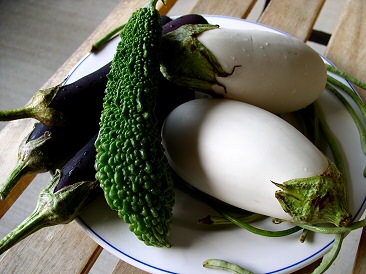 Bitter melon with Japanese and white eggplants and long beans

So I used one of the small bitter melons, some of the long beans, and all of the Japanese eggplant and made Pinakbet last night. I followed the recipe in Madhur Jaffrey’s World of the East Vegetarian Cooking almost exactly–I left out the oil, of course, and used a little more eggplant just because I didn’t want to have one lone eggplant left over. Then we sat down to eat it and . . . yuck! Even though the bitter melon makes up only a small part of the dish, the taste is overwhelming. I couldn’t taste the garlic or the ginger, only the bitterness. I forced myself to take a second and then a third bite, and I have to admit it got more tolerable as I ate it. I was actually able to eat most of the bowl, though I didn’t eat the bitter melon itself. I felt I had to make the effort because I just didn’t want to waste all the lovely eggplant, fresh tomatoes, and other vegetables that I’d put into this stew.

My daughter gave up after one bite, and my husband managed to choke down maybe half a bowl. The rest, I’m afraid to say, is going into the compost pile. I’ll bet bitter melons are good for the soil!

I’ll give you the recipe, but be sure to take a look at the suggestions for cooking bitter melon in the comments below. I’m sure that it was my cooking that was to blame for this failed meal, so please don’t make the mistakes I did! 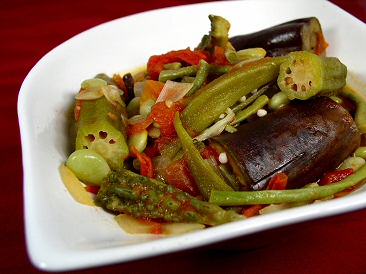 Brown the ginger, garlic, and onion. Add the tomatoes and cook for a few minutes. Add two cups of water and the remaining ingredients. Simmer vigorously for 20 minutes, stirring often. It’s done when the liquid is thick and the vegetables are tender. Add salt if necessary, remove the ginger, and serve. Good luck!

Oh, here’s a coincidence: check out what’s over at Albion Cooks!