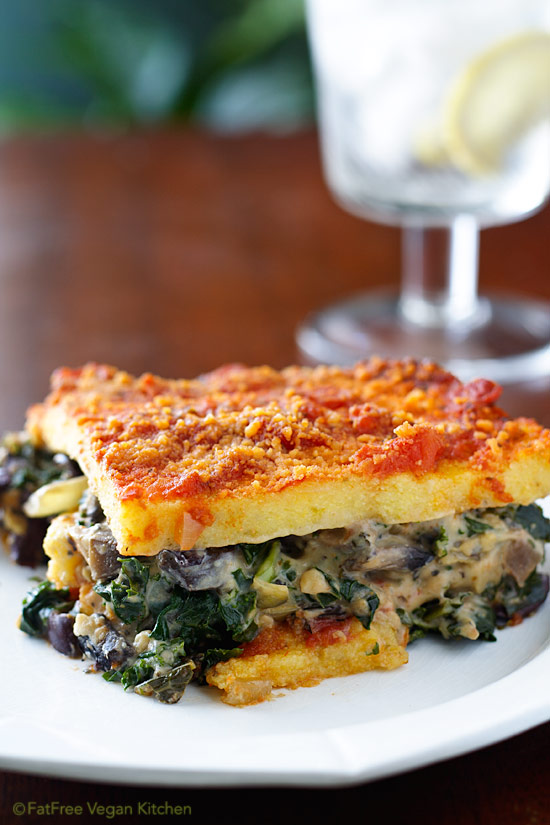 You know I really like a recipe when I make it two days in a row. I first made this dish for dinner last night, and though I liked it and my husband thought it was “outstanding,” I still wanted to tinker with the recipe. It was good, but I thought it could be incredible. So this morning I got to work, making a couple of small changes, and boy am I glad I did. A good recipe got even better—and I got an amazing lunch!

Like Rustic Red Kale and White Bean Soup, this recipe is a devious attempt to get you to eat your leafy greens. Kale and portabella mushrooms are sautéed with garlic and then mixed with a creamy “cheese” sauce before being baked between two layers of polenta. (Fans of my Eggplant Parmesan will recognize the sauce from that recipe.)

Despite the long list of ingredients, this dish is pretty easy to put together, especially if you use packaged polenta and jarred marinara sauce. You’ll probably spend the most time preparing the kale, but you can even cut out that task if you substitute bagged spinach instead. 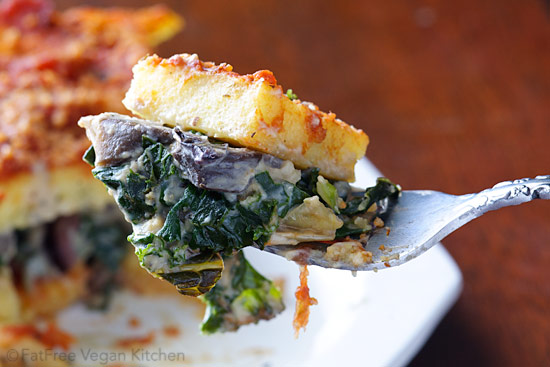 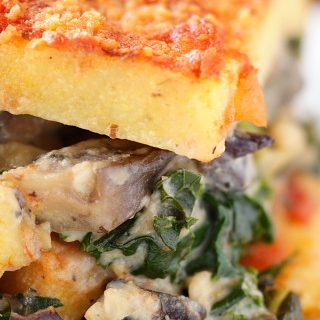 Polenta Lasagna with Portabellas and Kale

If you use packaged polenta, slice it into 18 thin slices. If you make your own polenta, spread the cooked polenta out on a baking sheet and use a spoon or your moistened hands to spread it no thicker than 1/4 inch. When it has solidified, either cut it in half and use each half as one layer or cut it into an even number of pieces that you can fit together to fit your baking dish.
Prep Time 25 minutes
Cook Time 35 minutes
Total Time 1 hour
Servings 6
Author Susan Voisin