Warning: This is not a fat-free recipe. In fact, there is absolutely nothing healthy about these vegan magic cookie bars except, perhaps, the nuts. Though these bars are a little lower in fat than their non-vegan counterparts (and have no cholesterol), this is definitely the most fat-filled, junk foodish recipe that you’ll see on this blog, ever. I just want to make that clear right from the start or else I’ll get letters. I’ll probably still get letters. (You know who you are.) 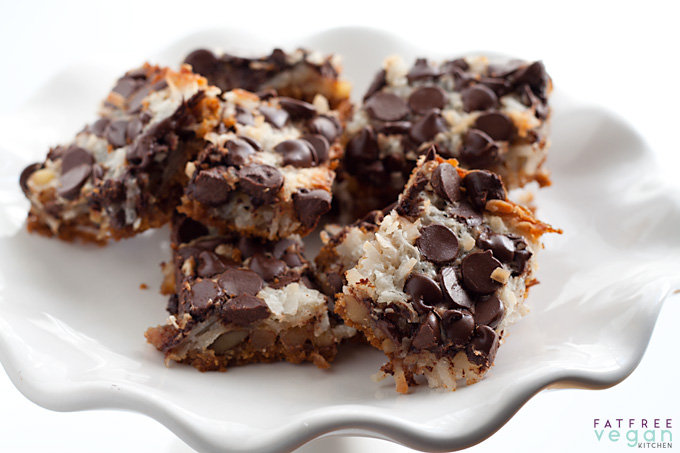 Have you ever gotten a craving for something and you finally just had to give in? My mother used to make these overly-rich but amazing treats for holidays and special occasions, but in the last few years I never even thought about them, assuming that they were lost to me because they contain a primary ingredient that is so non-vegan that it’s hard to conceive of a workable substitute. But something I saw on another blog or in a magazine must have reminded me of them because suddenly the craving was there and I just couldn’t let it go.

No, strike that. I think I could have let the craving die a natural death, but there was something about the challenge of veganizing a seemingly unveganizable recipe that spurred me on.

Sure, the idea of revisiting an old childhood favorite had its appeal, but I think the explorer in me just wanted to see if it could be done. So I spent literally days coming up with a recipe that I thought might work before putting it to the test, afraid even as I did it that I’d wind up wasting my time and ingredients. But, miracle of miracles, it worked, and they tasted just like how I remember my Mom’s. 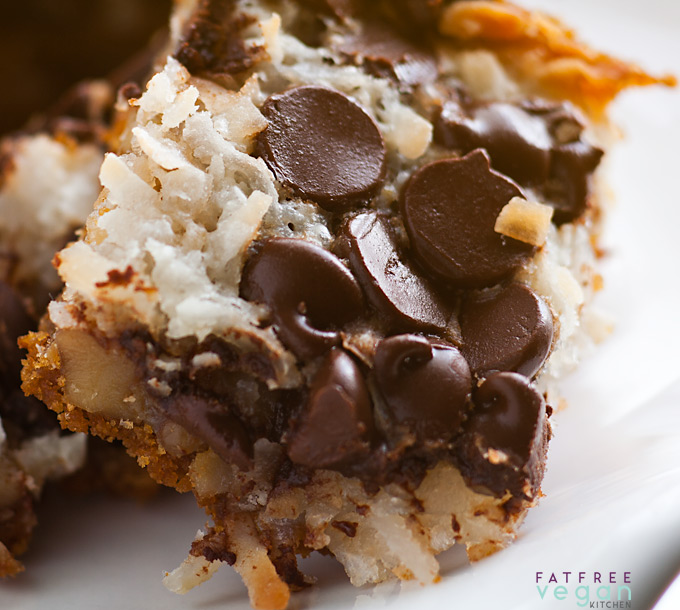 What are they like? They’re decadent. They’re melted chocolate, coconut, and nuts on a buttery crust of graham cracker crumbs held together by a creamy layer of…Eagle Brand Sweetened Condensed Milk? Well, they used to be, but not anymore. Believe it or not, my old friend silken tofu worked its magic again!

I suppose these vegan magic cookie bars are not too much of an extravagance if you can keep yourself from eating more than one (in my dreams!) Still, I’ll be reserving these for special occasions. I’m definitely bringing some to my parents’ house for Christmas! 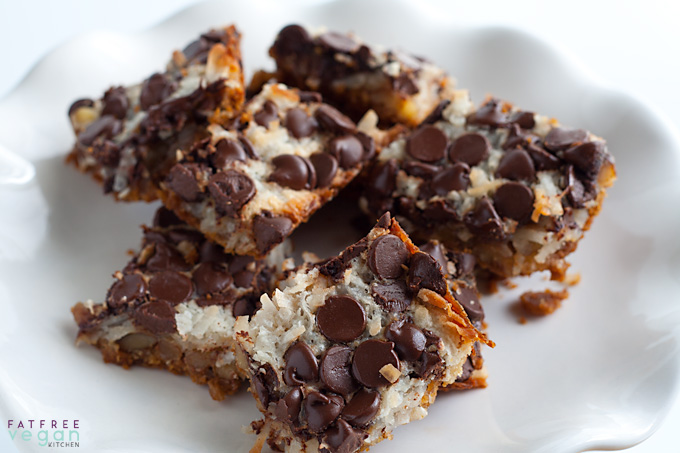 Again: Not a fat-free recipe! 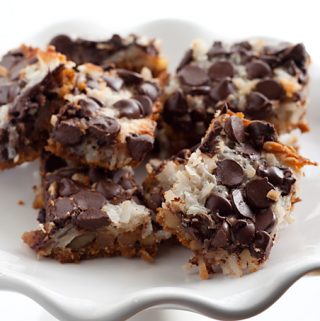 I don’t recommend substituting this tofu mixture in every recipe containing sweetened condensed milk, but it does work in this one. The cornstarch helps it thicken as it cooks, so definitely don’t try it in recipes that are not cooked.
Prep Time 10 minutes
Cook Time 30 minutes
Total Time 40 minutes
Servings 16 bars
Author Susan Voisin

If you want to attempt a lower-fat version, try replacing the margarine with 2 tablespoons of aquafaba (liquid from canned chickpeas) or any plant milk. The exact nutrition will vary depending on the type of chocolate chips and other ingredients you use.
Nutrition Facts
Vegan Magic Cookie Bars
Amount Per Serving (1 bar)
Calories 160 Calories from Fat 81
% Daily Value*
Fat 9g14%
Cholesterol 0mg0%
Sodium 71mg3%
Carbohydrates 17g6%
Fiber 0g0%
Protein 3g6%
* Percent Daily Values are based on a 2000 calorie diet.

Some ideas for future testing:

In my next post I will atone by making something super-healthy. I’m thinking winter squash, greens, and beans. Yum!