Sautéd red cabbage with peas and spices makes a simple, delicious Indian side dish that is vegan, low-calorie, and low-fat. 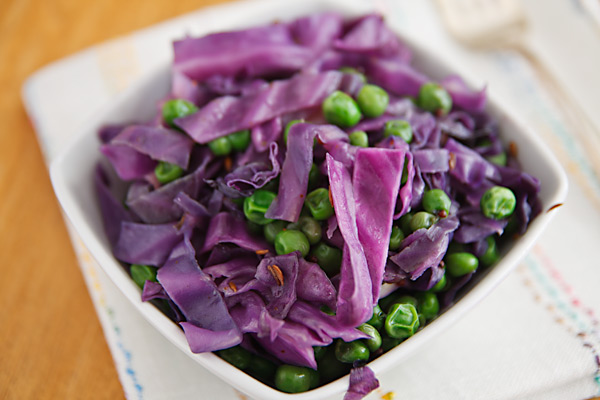 In the middle of January, the pickings get mighty slim if you’re trying to live only on fruits and vegetables that are in season. Though I’m far from being a locavore, I do try to focus my cooking around produce that’s naturally in season, not shipped from another hemisphere where the weather is the opposite of mine.

So no matter how tempted I may be to buy a mango and see if I can get it to ripen on my kitchen counter, in the winter I stick to oranges that I’ve picked myself from my parents’ trees and apples that have done a little traveling to get to Mississippi but are still, to my mind, almost in season.

While fruit choices are limited at this time of year, the prospects of finding in-season vegetables are much sunnier. In fact, one of the healthiest food groups is a cold-weather crop: Greens. Kale, collards, bok choy, chard, and cabbage are nutritional champs, high in vitamins, minerals, fiber, and, in the case of kale, high quality protein.

It’s the lowly cabbage, though, that comes out the winner in economics as well as nutrition. You can find green cabbage in virtually any grocery store at a price that makes it one of the bargains of the produce section. Personally, I like to pay a little more and get the red cabbage, not just because it’s marginally more nutritious but also because I think it’s pretty. 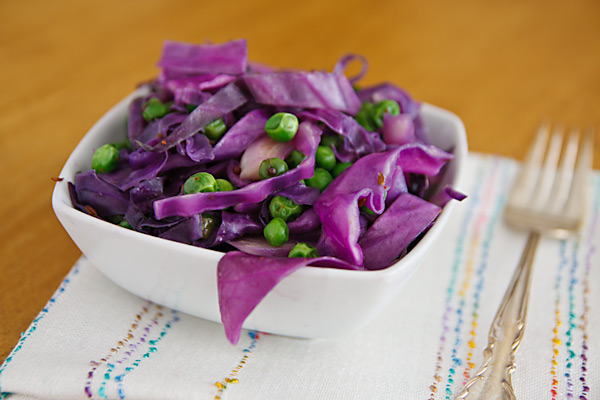 A few days ago I was making Cauliflower Dal with Panch Phoran and needed a side dish. While paging through the great cookbook that is the internet, I found just what I was looking for at Manjula’s Kitchen. If you haven’t seen Manjula’s videos or recipes, go there now and check them out, but be prepared to come away hungry.

Her recipe for Cabbage with Peas (Bund Gobi and Mater) looked delicious as-written, but I needed to adapt it a little to make it low-fat and child-friendly (meaning friendly to my child, who thinks black pepper is too spicy). I added a little more asafetida (hing) because I just love the stuff, and eliminated the turmeric because I didn’t want anything muddying up the color of my red cabbage. The result was so delicious that I made it two days in a row.

Okay, to be honest, I made it the second day because we ate it all up the first time before I could get a photo, but we still enjoyed every bite of that second batch. (If you’re planning to take a photo of it, you should know that it’s pretty for about 5 minutes. You need to take it off the heat as soon as the cabbage is just barely cooked and take its photo immediately; if you let it sit, the red turns an unphotogenic shade of indigo and the peas shrivel up.)

One more thing: If you are hesitant about cooking cabbage because of the smell, hesitate no longer. While boiling cabbage produces an odor that many people find objectionable, cooking it with little water, either in the oven or in a skillet as in this recipe, is odorless. In fact, if you enjoy the aroma of toasting cumin seeds, you should love smelling–as well as eating–this recipe. 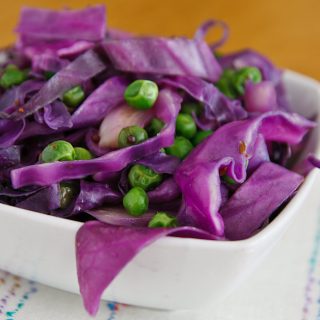 Red Cabbage and Peas with Cumin and Mustard Seeds

Course Side Dish, Vegetable
Cuisine Indian, Vegan
Keyword cabbage side dish, indian cabbage
Have you made this recipe?Mention @SusanFFVK and tag #fatfreevegankitchen in your photos on Instagram.
Share on Facebook Pin This Recipe Share by Email