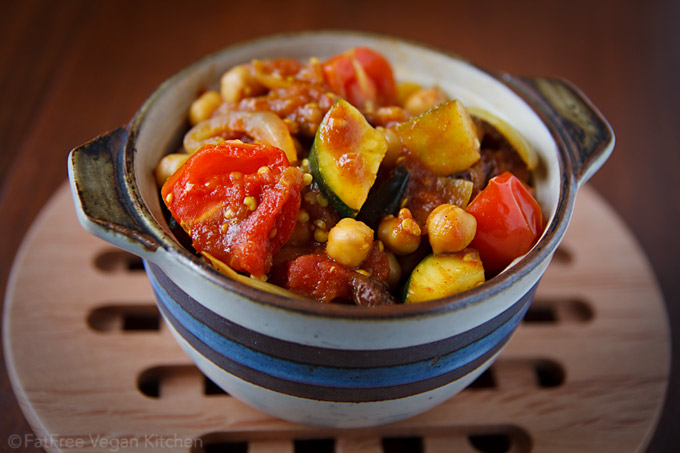 Eggplant. For a long time it seemed to me as if being vegetarian meant eating eggplant. I’d go into a restaurant and the one vegetarian item on the menu would be ratatouille, eggplant Parmesan, or pasta with eggplant. Though currently the ubiquitous vegetarian item seems to be hummus, there are still restaurants I visit where the only vegan option is an eggplant sandwich (panini, wrap, sub, or whatever, depending on the sandwich trend du jour), so if I didn’t like eggplant, I would be shiitake out of luck.

Fortunately, I don’t just like eggplant, I love it. The most versatile of vegetables, it can be sautéed, poached, baked, roasted, grilled, pureed—even stuffed. Try that with your broccoli!

Unfortunately, restaurants haven’t quite caught on to the many ways to cook eggplant, so invariably it’s breaded and fried, turning a naturally healthy vegetable into an oil-drenched cardiac time bomb. I’m not blaming the restaurants; anyone who’s ever cooked eggplant knows that if you get a splash of oil anywhere near it, the eggplant’s going to soak it up like a sponge and scream “feed me more!”

So what to do? I say, skip the oil completely and rely on other ingredients and seasonings to flavor your eggplant. I know there are those of you who don’t like eggplant unless it’s fried—or don’t like it at all—so I’ve been looking for new ways of cooking it that do away with the bitter flavor that eggplant can sometimes have and eliminate the need for oil. 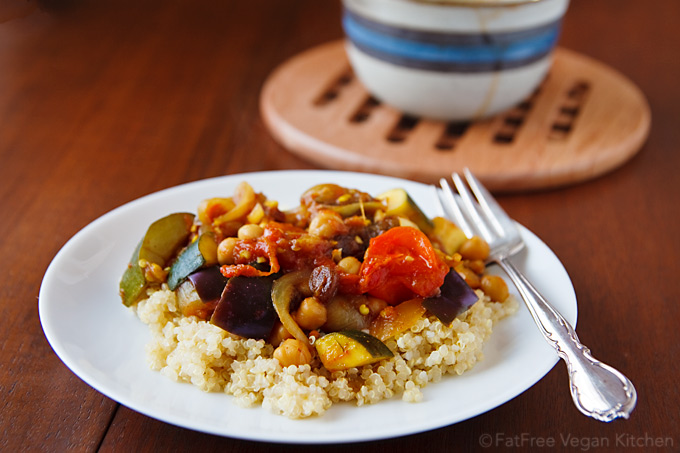 Warning: I’m About to Mention the Microwave, But You Don’t Have To Use It

In the massive reference book/cookbook Vegetable Love, Barbara Kafka says that microwaving gives eggplant a “lightness of taste and lack of bitterness” as well as preserves the color of the skin and flesh better than other cooking methods. Bryanna Clark Grogan has also experimented with microwaving eggplant, which she says dries it out so that it no longer has the same oil-sucking abilities, so after consulting her blog, I decided to try a version of her approach:

While my onions were browning, I spread four cone-shaped coffee filters on a plate, narrow ends to the middle, and piled my lightly salted eggplant on top. I didn’t spray the filters with oil, but after microwaving on high for 8 minutes, the eggplant didn’t stick at all. Some of the cubes of eggplant were becoming shriveled and dry while others were a little undercooked. If I had spread them out so that they were all touching the filters, they probably would have cooked more evenly, but I wasn’t worried because I knew they’d have a chance to finish cooking in the pot with the other ingredients. (You can skip this step if you’re micro-phobic; see the recipe below.)

Success! The ragout cooked in record time, and the eggplant was mild and delicious. Some of it broke down to become part of the sauce, but there were still plenty of cubes of deliciously flavored eggplant. Maybe I’m prejudiced because this aromatic stew contained so many of my favorite ingredients—chickpeas, cumin, smoked paprika, and quinoa as well as eggplant—but it’s one of my favorite dishes. 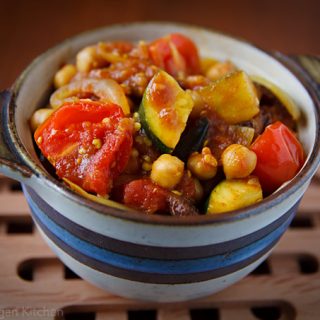 If you can find paper towels that are certified okay for microwaving (some contain metal fibers, so beware) just use a double layer of them instead of coffee filters. A dish towel (not terrycloth) or double layer of cheesecloth would also probably work. I’d stay away from parchment paper because I don’t think it is absorbent enough.
Nutrition Facts
Tunisian Vegetable Ragout with Quinoa
Amount Per Serving (1 serving)
Calories 278 Calories from Fat 27
% Daily Value*
Fat 3g5%
Sodium 412mg18%
Carbohydrates 56g19%
Fiber 11g46%
Protein 10g20%
* Percent Daily Values are based on a 2000 calorie diet. 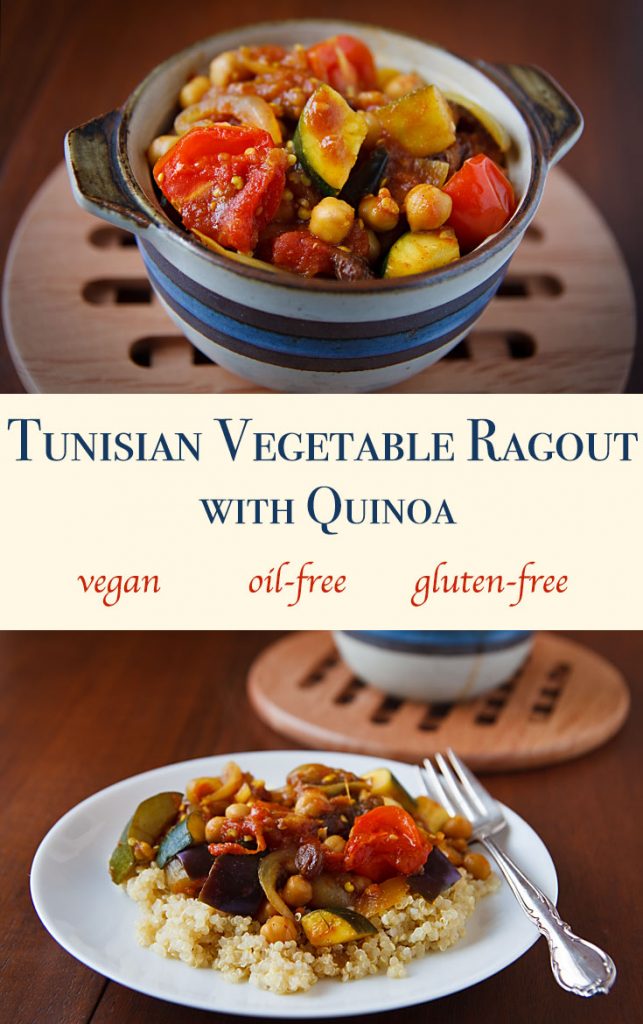