Homemade seitan (“wheat meat”) is wrapped around a savory stuffing in this elegant vegan main dish. 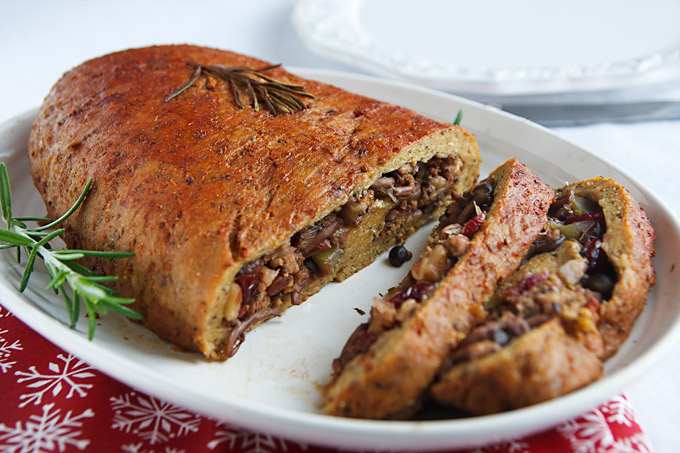 This is A Tale of Two Seitans.

For Thanksgiving this year, I decided to make something a little fancier than the baked tofu my husband, daughter, and I usually enjoy while our omnivorous extended family is eating turkey. The day before the big feast, I took one of my old favorite stuffings, wrapped wheat gluten around it, sealed it in foil, and baked it like “Veggeroni.”

Right out of the oven, the savory flavor of the stuffed seitan was divine. Though the texture was verging on dry, I had to chase away family members circling like ravenous wolves so that I could wrap it up for the trip to my parents’ house.

The next day, I reheated the foil-wrapped seitan in the oven alongside my green bean casserole and my mother’s cornbread dressing. And that’s where I made my mistake. I should have steamed it or microwaved it because it came out of the oven much drier than before. Doused with mushroom gravy, it was still good, but it could have been better. 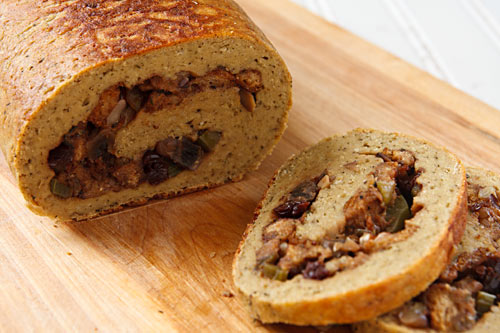 I posted a photo of the first seitan roulade on my Facebook page and planned to share the recipe when I got back from my Thanksgiving trip. But because I wasn’t completely satisfied with how the stuffed seitan “performed” for the big meal, I decided to see if I could come up with a moister, more tender seitan that would hold up to reheating.

That’s how this second seitan roulade came to be. 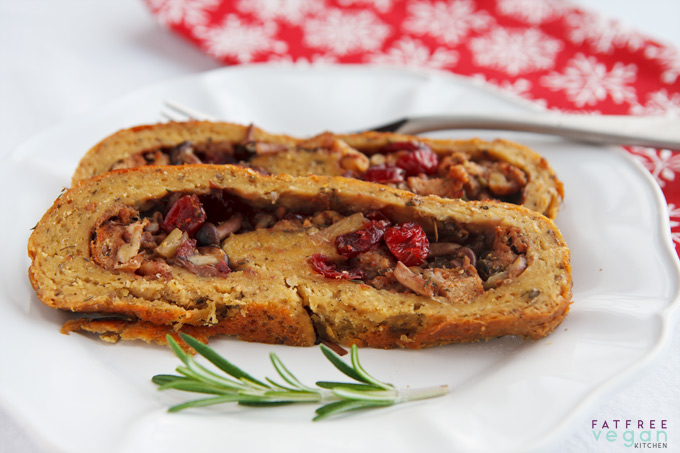 In this version, I “oven-steamed” the seitan first in a little broth before uncovering and baking it. Success! The stuffed seitan was so tender that we didn’t need any gravy.

The only downside is that because it wasn’t confined by foil, the roast expanded as it cooked and lost its “rolled” design. It’s also less sturdy than the foil-baked version, so if we were planning to travel with it, we’d need to pack it much more carefully.

Overall, I prefer the final version, but if you want the roulade look, follow the variation in the recipe below. Whichever way you make it, just be careful how you reheat it. Or better yet, eat it while it’s still piping hot out of the oven.

“Savory.” That’s the best word to describe this meat-free roast, redolent with the flavors of thyme and sage and enlivened with the sweet-sour tang of dried cranberries. You won’t have any leftovers! 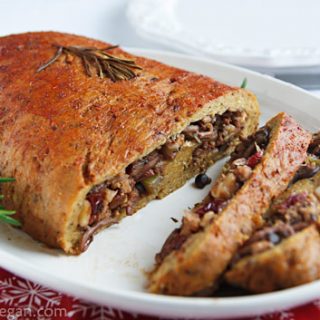 The stuffing ingredients are very flexible. I was all out of regular mushrooms, so I used beech mushrooms, but any kind will do. Mushroom haters, feel free to substitute another vegetable or just leave them out. Walnut haters can use another type of nut (or no nuts at all) and cranberry phobics can use dried cherries, raisins, or no fruit at all.
Prep Time 1 hour
Cook Time 1 hour 35 minutes
Total Time 2 hours 35 minutes
Servings 6
Author Susan Voisin

Variation: For a roulade that holds its shape and is a little simpler to cook, though not as moist and tender, make the following adjustments: Follow the directions for assembling the roast, brush it with 1 teaspoon soy sauce mixed with 1/4 teaspoon sesame oil, and then roll it up tightly in aluminum foil (it may take two sheets), twisting the ends to seal well. (The baking broth won't be needed.) Place on a baking sheet, bake for 25 minutes, turn, and bake for 25 more. Check to make sure it is done, and give it more time if it's not firm and brown. Slice and serve with gravy.
Nutrition Facts
Seitan Stuffed with Walnuts, Dried Cranberries, and Mushrooms
Amount Per Serving (1 serving)
Calories 444 Calories from Fat 68
% Daily Value*
Fat 7.5g12%
Sodium 642mg28%
Carbohydrates 57g19%
Fiber 7.5g31%
Sugar 2.4g3%
Protein 39g78%
* Percent Daily Values are based on a 2000 calorie diet.

Happy Holidays and thanks for reading FatFree Vegan Kitchen! 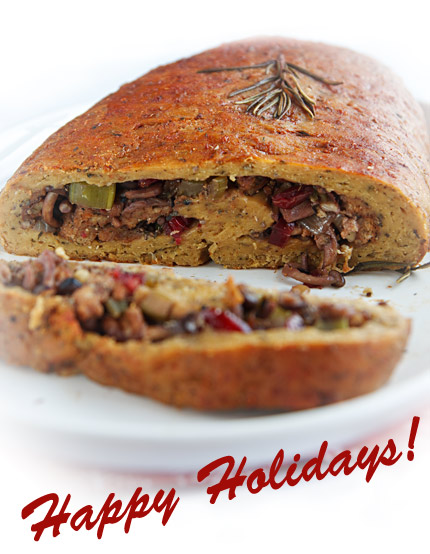