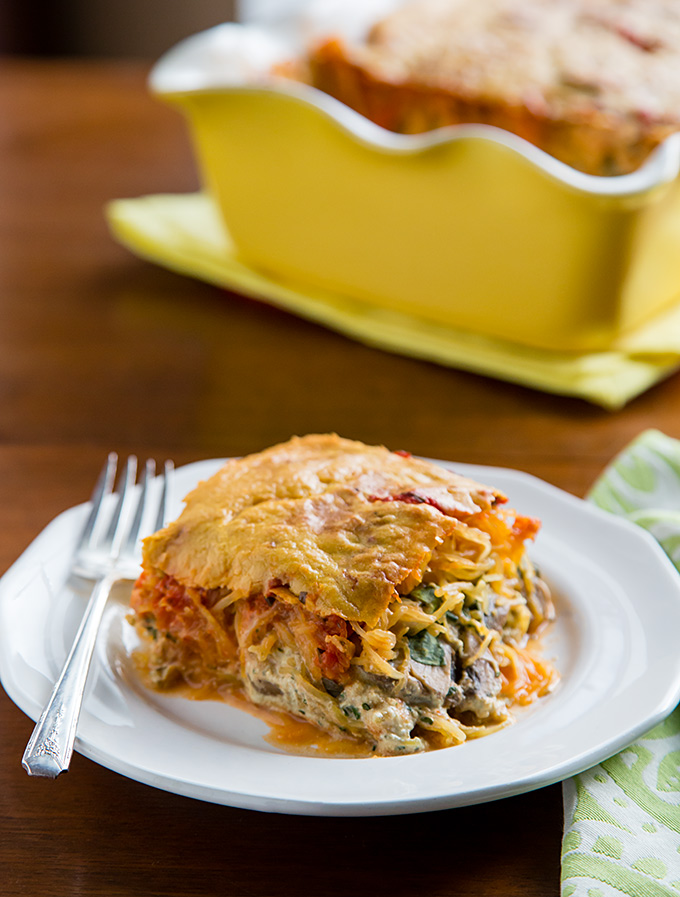 Right before I went vegan, I made the best lasagna I had ever tasted. It was called Pesto Lasagna, and it contained eggs and three kinds of cheese. It was so rich and creamy that I never tried to recreate it as a vegan because a cheeseless, low-fat version seemed impossible.

I’m not usually one to shy away from tackling the impossible, but I didn’t want to tamper with the memory of a meal that had grown to mythic–and probably unrealistic–proportions over the years. But this week I decided not only to take on the pesto lasagna of my vegetarian days but also to do something I never would have dreamed of doing back then: substitute the noodles with spaghetti squash for a lighter, gluten-free, but still rich and creamy lasagna. And I’m so glad I did! 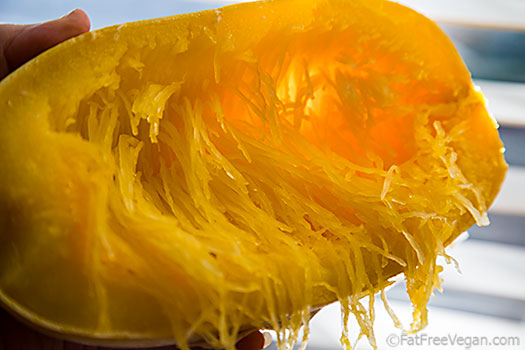 But before there was success, there was failure. My first attempt never really got past the spaghetti squash stage. I had bought a small, 2-pound spaghetti squash at the farmers’ market, and I roasted it, as I’ve done in the past. But when I cut it open, the insides were a wet, clumpy mess, not the individual strands of gold “spaghetti” I was expecting. I couldn’t even separate the seeds from the flesh because it was all one sodden pile of mush. I must have cooked it too long for its size, but that’s the problem with cooking a spaghetti squash whole–you can’t check it to determine when it’s done. 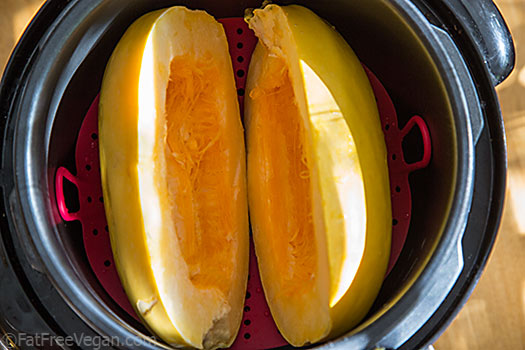 For my next attempt, I decided to cut the squash in half before cooking so that I could check its doneness. I went down to the grocery store and bought a medium-sized squash, a little over 3 pounds. I didn’t want to wait the hour it could take to roast the squash, so I decided as a short-cut to pressure cook it instead.

I fitted my electric pressure cooker with a gadget I’d just bought, a silicone steamer basket, added a cup of water and the two halves of the squash, and then set the timer on high for 8 minutes. I figured that if it needed more time, I could always add another minute, but when I checked it, the squash was perfectly cooked, tender enough that I could scrape out the golden strands but not turning to mush. 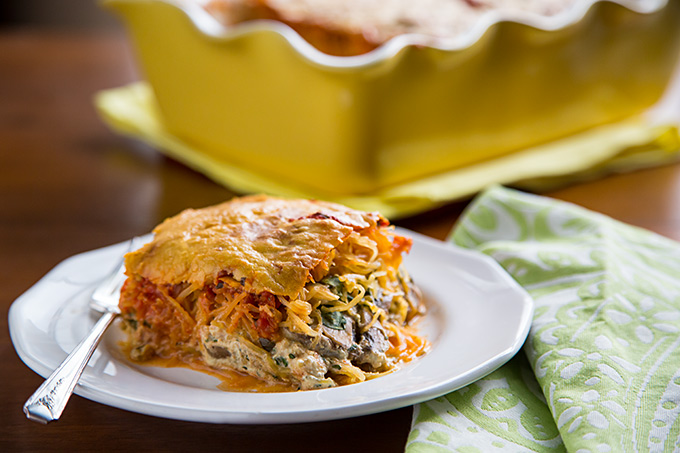 The squash turned out perfectly and so did the lasagna. My husband raved at how good it was and told me that, frankly, he hadn’t been optimistic about spaghetti squash instead of lasagna noodles. But we both loved the creaminess of the sauce and filling which contrasted with the slight crunch of the “noodles.” And the fresh basil gave it a fresh, peppery zing. It was a complicated dish to make on a weeknight, but I’ll definitely make it again.

If you’re looking for an easy, basic lasagna with actual lasagna noodles, be sure to try my Easy Spinach and Mushroom Lasagna! 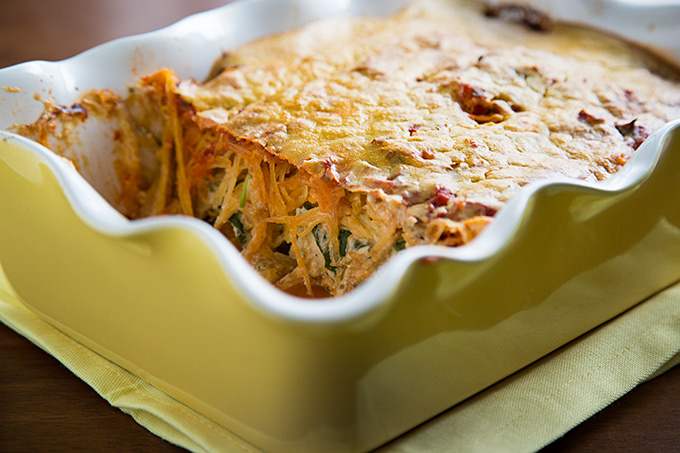 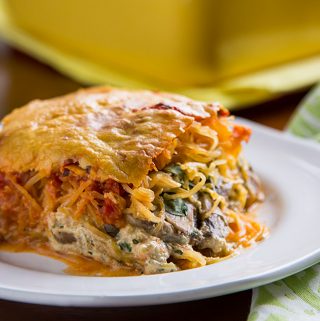 The cashew cheese sauce gives this lighter lasagna its richness, but you can cut the fat by 2 grams per serving by leaving out the cashews.
Prep Time 30 minutes
Cook Time 1 hour
Total Time 1 hour 30 minutes
Servings 6
Author Susan Voisin

Since spaghetti squash doesn’t have the starch of lasagna noodles to absorb and thicken the sauce, some liquid in the bottom of the pan is normal. But the lasagna will get firmer the longer it stands uncovered, so you can make it ahead of time and reheat it before serving.
Nutrition Facts
Spaghetti Squash Pesto Lasagna
Amount Per Serving (1 serving)
Calories 254 Calories from Fat 76
% Daily Value*
Fat 8.4g13%
Sodium 248.9mg11%
Carbohydrates 30.5g10%
Fiber 3.3g14%
Sugar 3.7g4%
Protein 18.3g37%
* Percent Daily Values are based on a 2000 calorie diet.

Course Main Course
Cuisine Italian, Vegan
Keyword casserole, creamy, oil-free, vegetarian
Have you made this recipe?Mention @SusanFFVK and tag #fatfreevegankitchen in your photos on Instagram.
Share on Facebook Pin This Recipe Share by Email 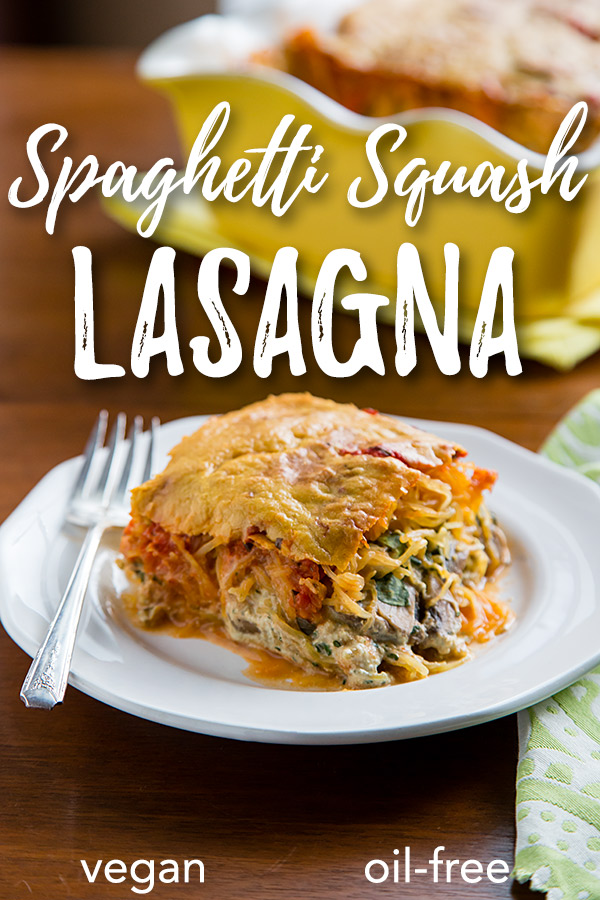