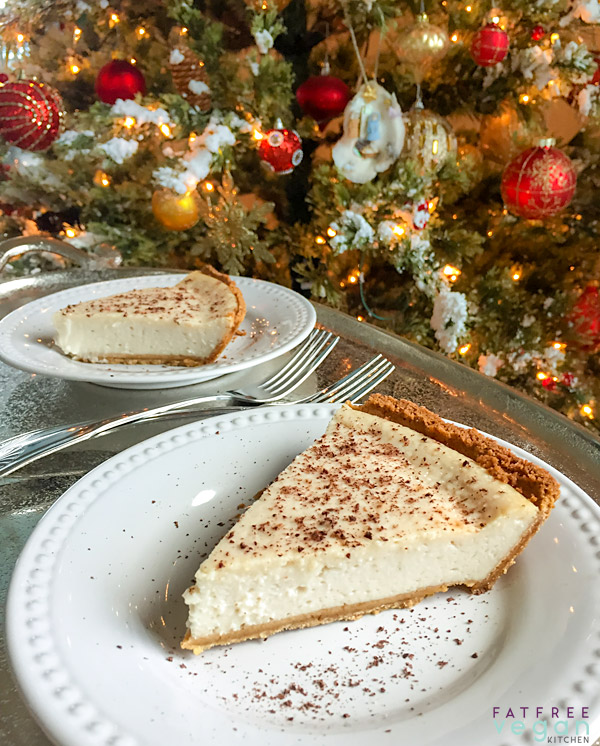 When my family and I left town last week to spend Christmas with our two families, the last thing I expected was to come home with a new recipe to share. I’d signed off on Facebook for the holidays and didn’t even bring a camera with me. My plan was to make only tried and tested recipes for Christmas Day (and as few of them possible—I was on vacation, darnit!), but when we couldn’t find vegan eggnog in any store, Vegan Eggnog Cheesecake had to become Vegan Irish Cream Cheesecake.

Who could have guessed that it would be hard to find vegan eggnog in New Orleans? In the days leading up to Christmas, we looked in 3 different grocery stores, including Whole Foods, without any luck. In one of those stores, I bought a bottle of Bailey’s Almande, which I’d heard through internet chatter was the new vegan, gluten-free version of Irish cream. I wasn’t planning to cook with it—I just wanted to try it. It’s been decades since I had Irish Cream, and I was curious to taste it again. 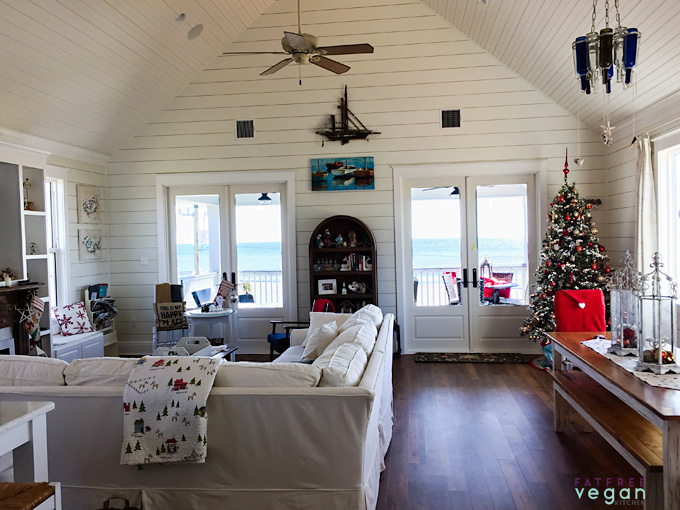 Beach Blessings: Our Home for 3 Days

After spending Christmas Eve with my in-laws in New Orleans, we drove to the Mississippi Gulf coast to spend the next few days with my family in a beautiful rental house overlooking the beach. We barely had time to unpack the car before we had to start cooking Christmas dinner and dessert. I hadn’t given up on making the eggnog cheesecake—I’d decided to begin by making a vegan nog and use that in the cheesecake.

But once I was surrounded by family and beautiful beach views, I didn’t feel like spending any extra time in the kitchen. Then the idea of using the Almande came to me, and the rest is history.

Now, before the Health Police chime in, I know that even vegan Irish Cream is not a health food. I’m aware that it has sugar, alcohol, and fat (it’s made from almonds). I’m also aware that the cheesecake I made from it is full of processed food and is not suitable for any Whole Foods Plant Based diet.

I consider it a party food, something you make for celebrating with friends and family once a year (or however often you like because I am not the Health Police, either.) It is not fat-free. 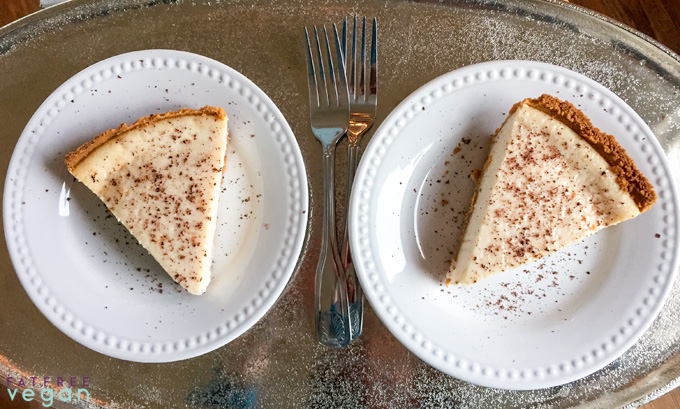 So how did it come out? Super-rich and flavorful, even more so than the eggnog version. After originally cutting “normal” sized slices, I had to go back and cut them in half because of its richness. It was so good that I knew I had to share it with you, so I used my phone to take the photos in front of the beautiful Christmas tree the owner of the home had set up for us.

I probably could have cut the sugar back to half a cup, but I didn’t want to take any chances with our only vegan dessert. All in all, it was a great success, and the only thing stopping me from making it a Christmas or New Year’s tradition is the cost—Bailey’s Almande is several times more expensive than eggnog.

If you want to attempt to make a healthier vegan Irish Cream Cheesecake, I suggest substituting an almond-based cream cheese, such as Kite Hill, for the Tofutti. I would also increase the cornstarch by a tablespoon just to make sure it sets. This also applies if you use any silken tofu other than Mori-Nu. Please, if you make any substitutions, test the recipe before you plan to bring it to any party or event. Because I’ve made it only as written below, I can’t promise good results if you make any changes. 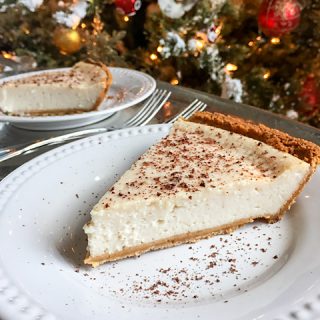 If you want to attempt to make this a little healthier, I suggest using an almond-based cream cheese, such as Kite Hill, instead of Tofutti. I would also increase the cornstarch by a tablespoon just to make sure it sets. This also applies if you use any silken tofu other than Mori-Nu. Please, if you make any substitutions, test the recipe before you plan to bring it to any party or event. Because I've made it only as written, I can't promise good results if you make any changes. Nutritional info based on Tofutti Better Than Cream Cheese and does not include crust.
Nutrition Facts
Vegan Irish Cream Cheesecake
Amount Per Serving (1 piece without crust)
Calories 260 Calories from Fat 54
% Daily Value*
Fat 6g9%
Sodium 143mg6%
Carbohydrates 26g9%
Sugar 21g23%
Protein 4.55g9%
* Percent Daily Values are based on a 2000 calorie diet. 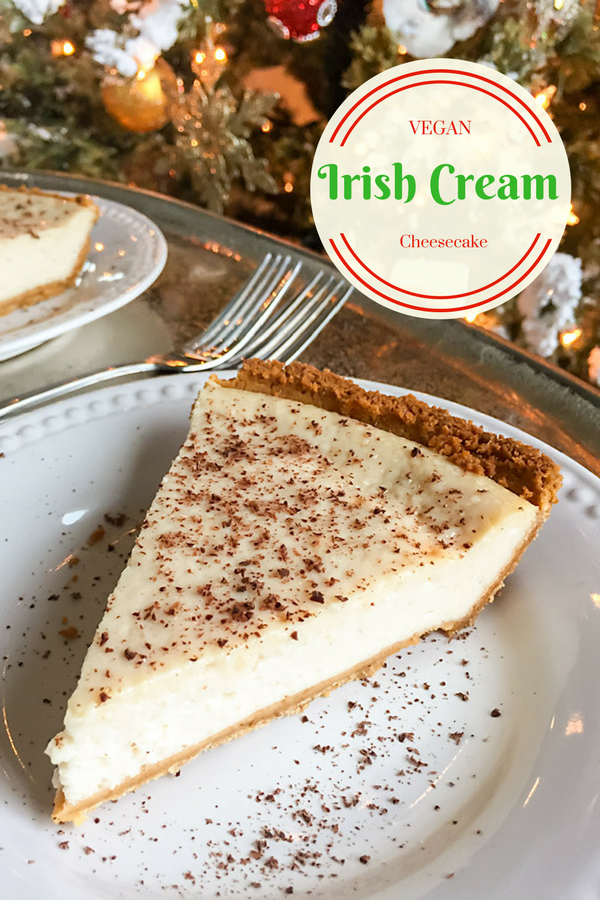 I wish you all a very Happy New Year! Please start it off right with some black-eyed peas and greens!

I have not been compensated in any way by Bailey’s, Tofutti, or any other brand. Links to Amazon are affiliate links, and I may receive a few pennies on the dollar if you buy through them. Thank you for your support!