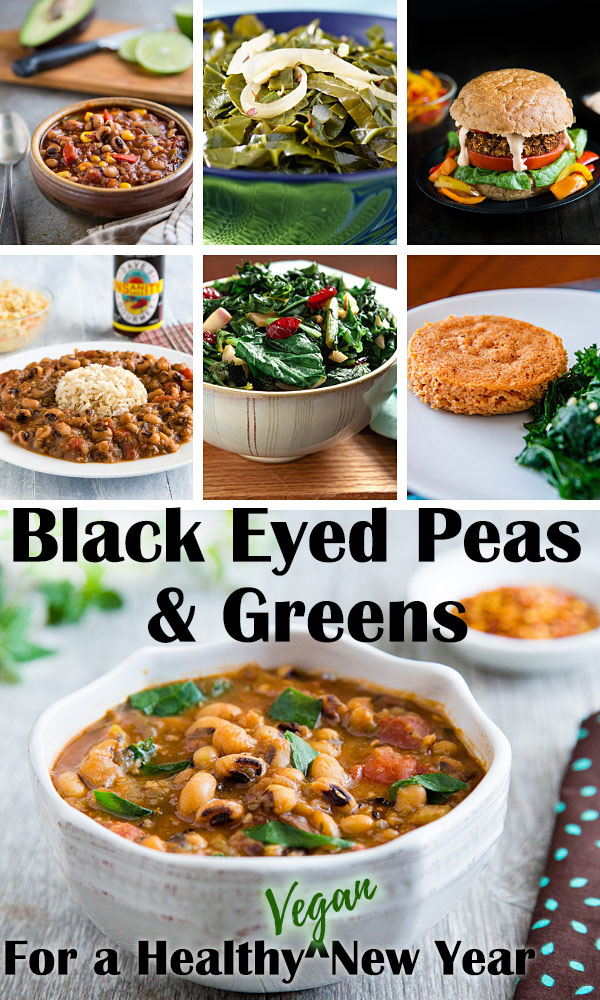 Black-eyed peas and greens are the traditional New Year’s Day meal in the South. Supposedly, the peas bring you good luck and the greens bring you money in the coming year. Or maybe it’s the other way around. Either way, I think it’s a great tradition because beans and greens are about the healthiest thing you can eat, and what better way to start your year off right. But don’t settle for plain old peas and greens! Here are some of my favorite ways to kick off the new year with lots of flavor.

One of my favorite dishes, Creole Black-eyed Peas is full of flavor without being spicy–unless you want it to be. Do start with dried peas–they taste 10 times better than canned. 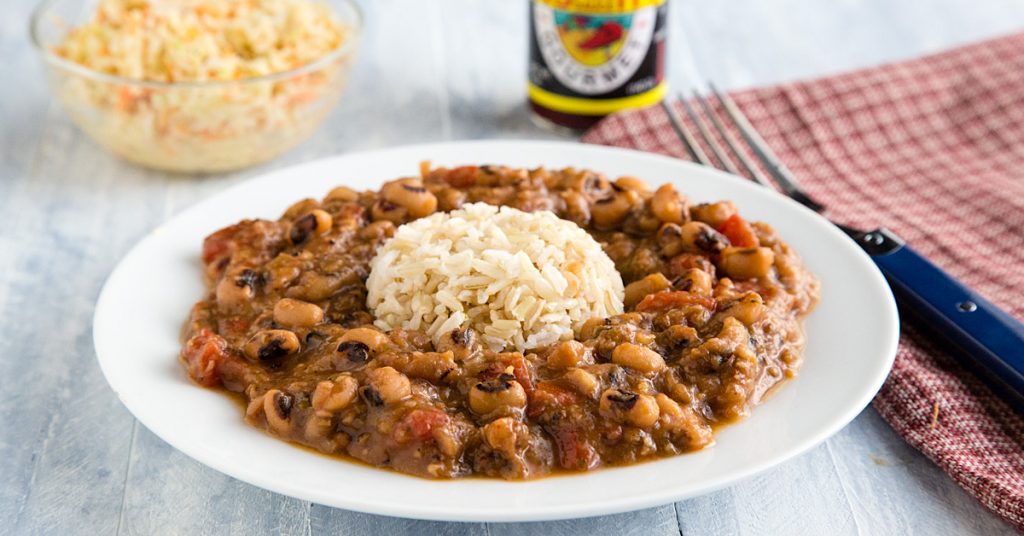 Creole Black-eyed Peas
Tender black-eyed peas in a creamy, creole sauce that's spicy but not hot. These vegan black-eyed peas are so much faster in a pressure cooker, but if you don’t have one, soak your peas overnight and follow the instructions at the end of the recipe.
Get the Recipe

If you got a new air fryer for Christmas, you can make this easy snack: Crispy Air-Fried Black-eyed Peas. Be sure to join my air fryer group on Facebook, too. 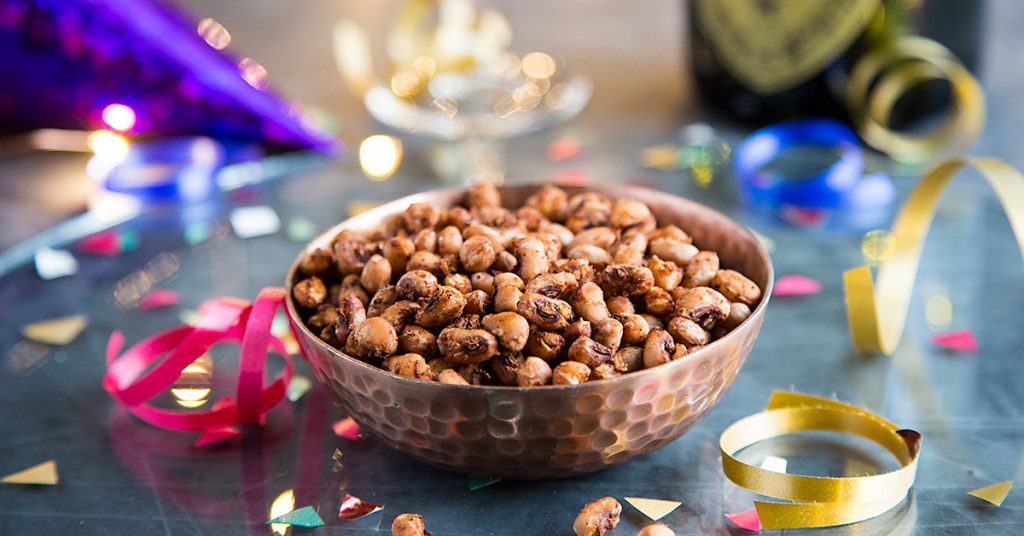 Crispy Air Fried Black-Eyed Peas
The air fryer makes this black-eyed pea snack crunchy in minutes, but you can also make them in an oven or toaster oven. See the notes below. The recipe depends on having firm, intact black-eyed peas, so if yours are mushy and falling apart, save them for another use.
Get the Recipe

You don’t have to prepare black-eyed peas in a Southern style to reap all the benefits they bring. This Black-eyed Pea Masala is an adaptation of a traditional Indian dish, full of the flavors of cumin, cinnamon, and ginger. It’s amazing! 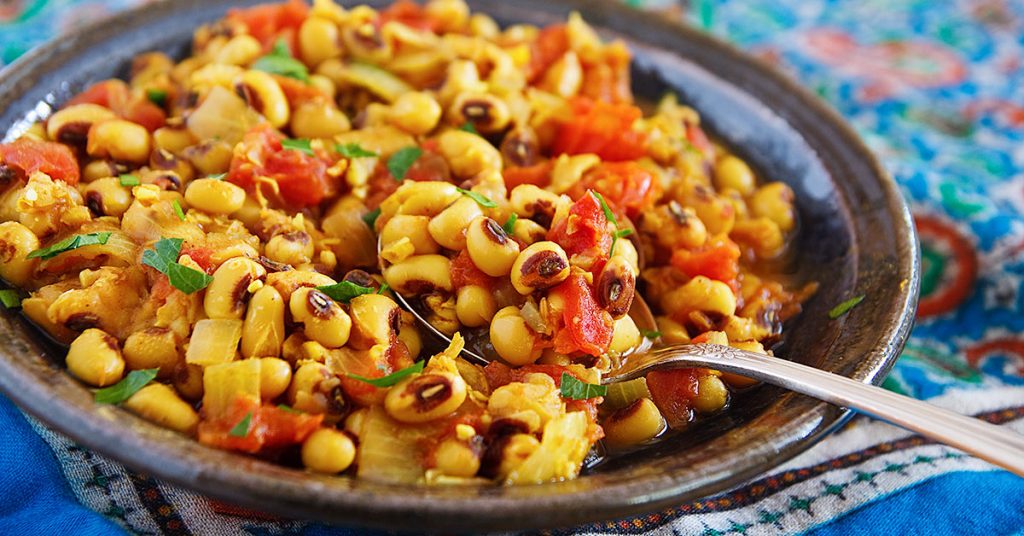 Bold flavors, including chile powder and chipotle, balance out the earthiness of black-eyed peas in this incredible Black-eyed Pea Chili with Quinoa and Corn. 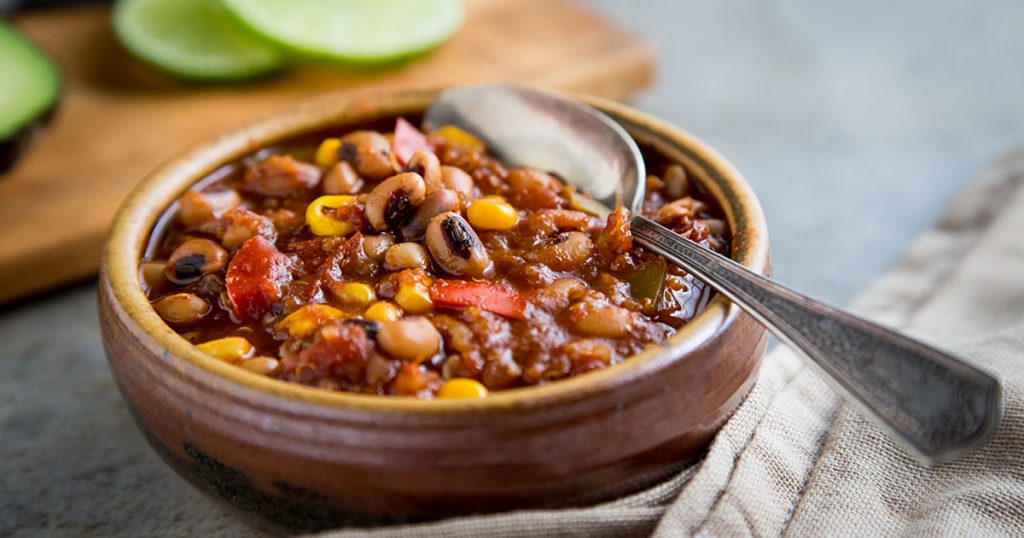 Black-eyed Pea Chili with Quinoa and Corn
This thick and hearty black-eyed pea chili will make a black-eyed pea lover out of you. Vegan, low-fat, and perfectly seasoned, it's like health in a bowl!This recipe makes a lot, but it can be easily halved to make a smaller pot of chili.
Get the Recipe

Ginger, garlic, and hot sauce are perfect accompaniments to black-eyed peas and kale, and if you’re a fan of Korean food, you will love this Black-eyed Peas and Kale Bowl. 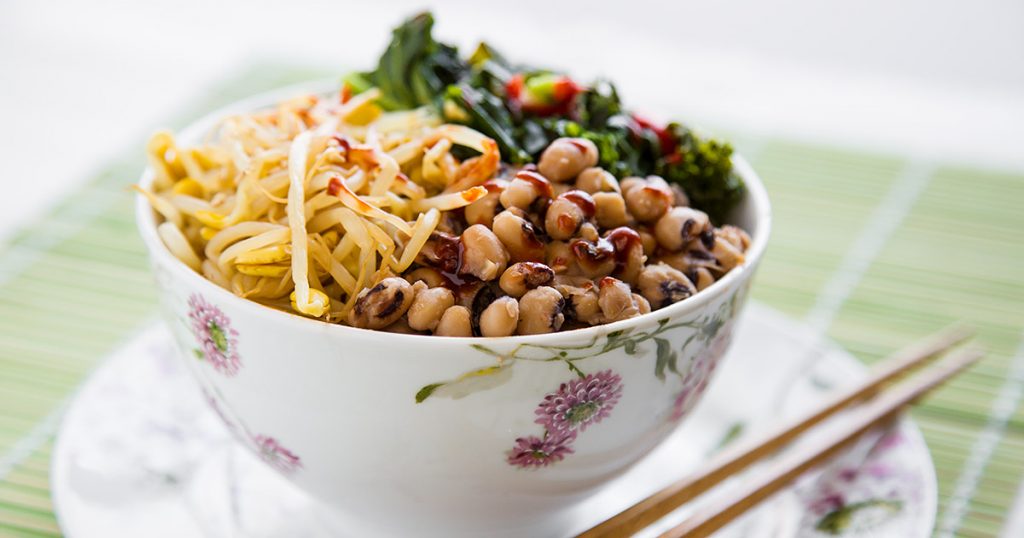 Korean-Inspired Black-eyed Peas and Kale Bowl
Similar to bibimbap, this dish is a collection of separately-prepared ingredients served over rice. While it’s delicious with just the black-eyed peas and kale, I suggest adding a third component, such as the bean sprouts salad, shown, or Korean-Style Cucumber Salad.
Get the Recipe

One of my favorite soups, Spicy Collards and Black-eyed Pea Soup is another great way to combine your greens and peas into one dish. If you have a pressure cooker, you can cook this from dried peas in under an hour. 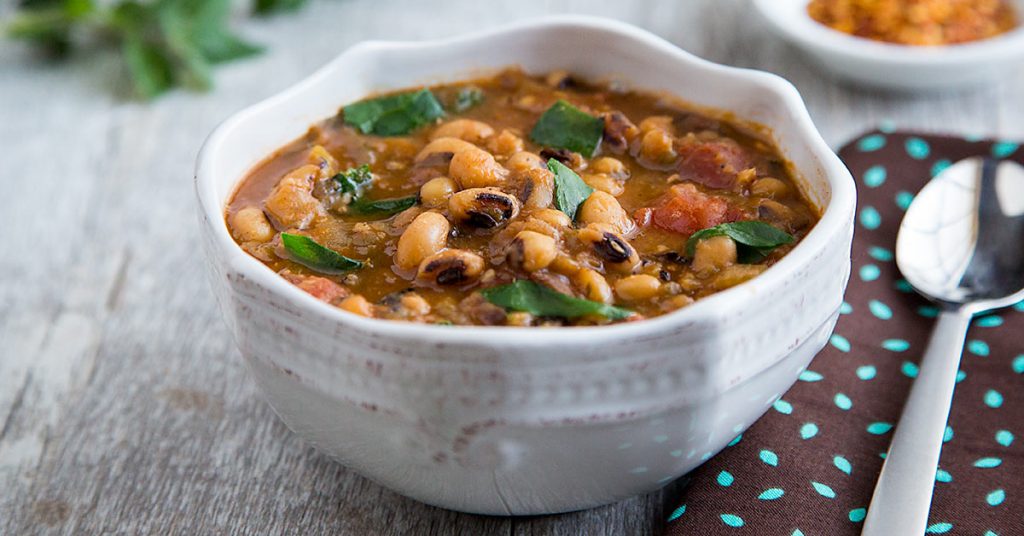 Spicy Collards and Black-eyed Pea Soup
This collards and black-eyed peas soup is spicy, smoky, vegan, and low-fat. Make it quickly in the Instant Pot or pressure cooker! If you don't like or can't find collards, feel free to substitute your favorite greens. Quicker-cooking greens such as spinach should be added right at the end of cooking.
Get the Recipe

Substitute cooked black-eyed peas for the red beans, and Collards Stuffed with Red Beans and Rice will be the hit of your New Year’s Day dinner. 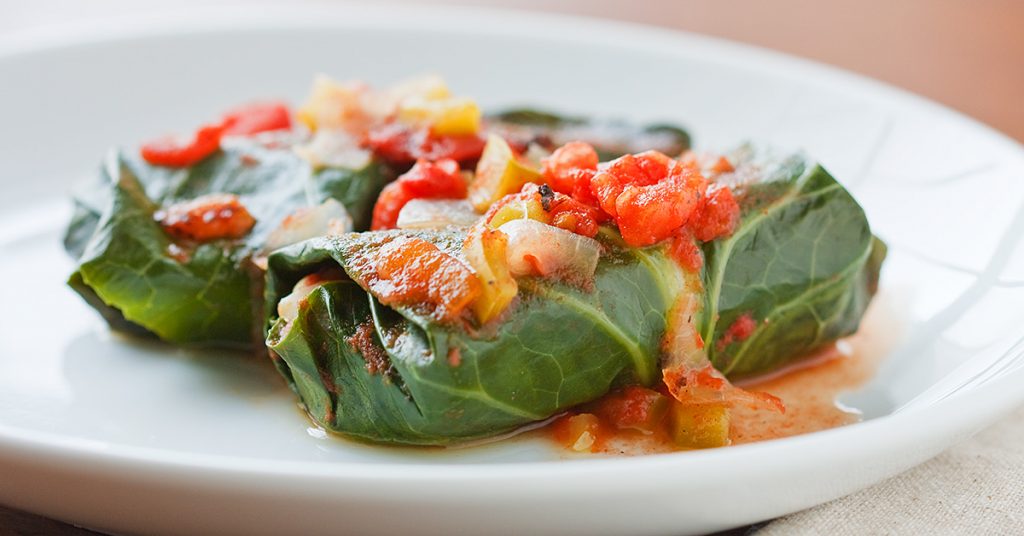 Collards Stuffed with Red Beans and Rice
Louisiana-spiced red beans and rice are wrapped in collard leaves and baked with a simple tomato sauce. These stuffed collards are vegan and gluten-free. If collard greens aren’t available, you can use large cabbage leaves instead.
Get the Recipe

Black-eyed Pea Gumbo is a great way to warm up your chilly new year. It’s also an easy dish to make using canned black-eyed peas and frozen okra. Add some greens if you like and get your luck and money taken care of in one dish! 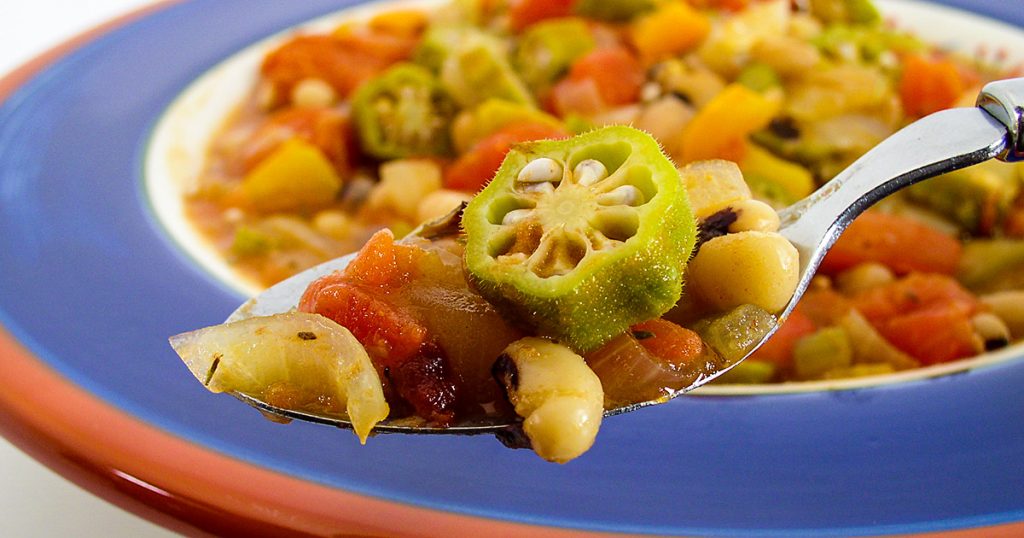 Black-eyed Pea Gumbo
This richly flavored gumbo proves that you don't need meat or seafood to have delicious Louisiana cooking!
Get the Recipe

If you like the idea of getting in your black-eyed peas right at the stroke of midnight, serve up some Texas Caviar and tortilla chips at your New Year’s Eve party. Your guests will love it and leftovers make a great salad the next day. 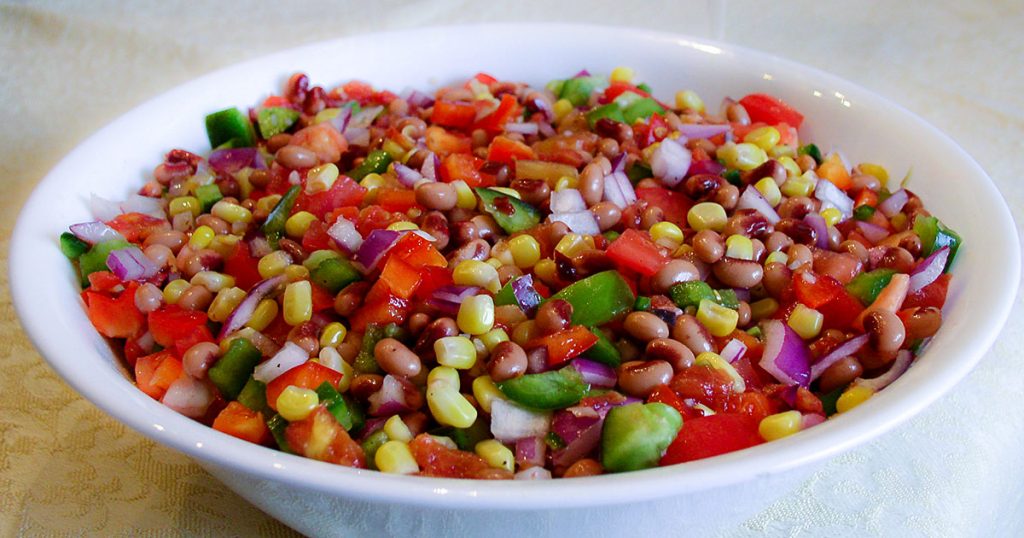 Texas Caviar (Black-eyed Pea Salsa or Salad)
This recipe makes a Texas-sized amount of salsa, so halve it if necessary.
Get the Recipe

Blackeyed Pea Hummus is another non-traditional dish that makes a great party food or appetizer. 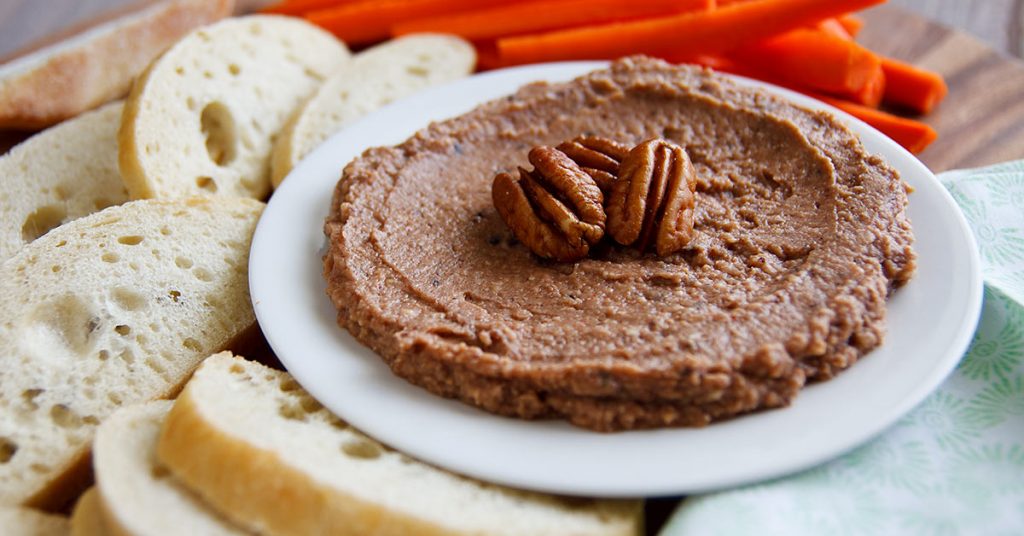 Black-Eyed Pea Hummus
A thick, smokey dip with Southern charm, this black-eyed pea hummus goes well with thick slices of crispy bread, crackers, or raw vegetables.This is one of those dishes that tastes best after “resting” for a while to allow the flavors to blend, so try not to eat it right away.
Get the Recipe 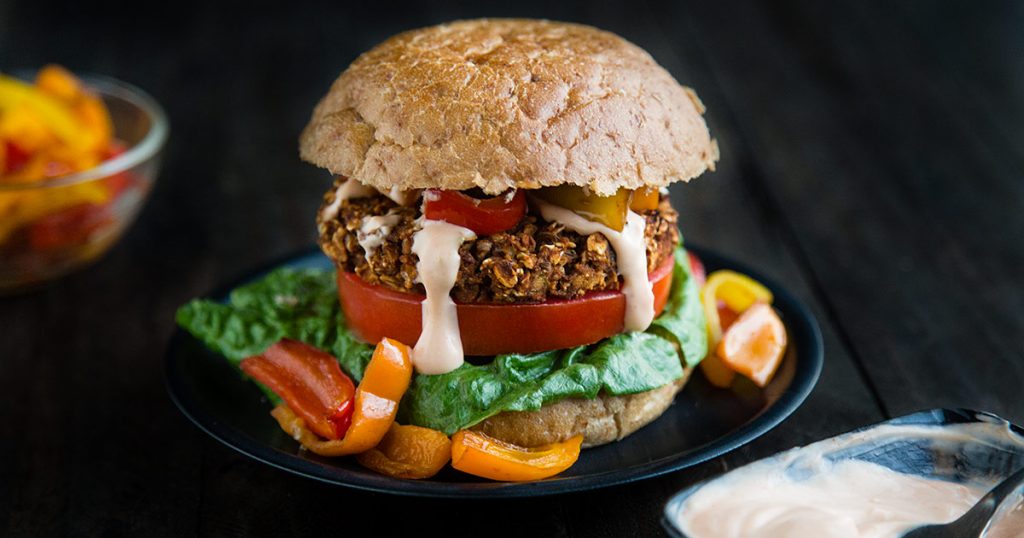 Barbecue Black-Eyed Pea Burgers
Delicious and meaty, these vegan black-eyed pea burgers are seasoned with just a touch of barbecue sauce for a spicy, smoky flavor. They freeze well, so you can make a batch and save some to eat later.
Get the Recipe

Get out your pressure cooker and make Quick and Delicious Collards –or any green you like. 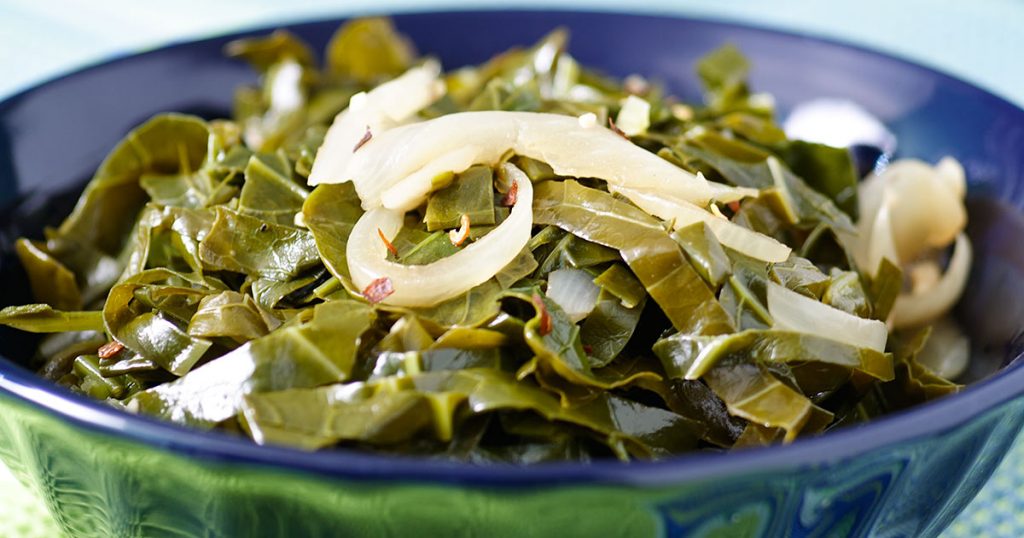 Quick and Delicious Collards
These flavorful collard greens take just minutes in the pressure cooker or Instant Pot and require only 4 ingredients that you probably have right now. Using the pressure cooker makes collards tender without cooking for hours.
Get the Recipe

Traditionally, Southerners cook greens by simmering them in ham-seasoned water until very tender, often an hour or more, and with older greens, I do a similar, vegan version using caramelized onions and hickory salt. But fresh greens of any kind from kale to turnip can be quick-cooked in a skillet like these New Southern Greens with cranberries and smoked paprika. 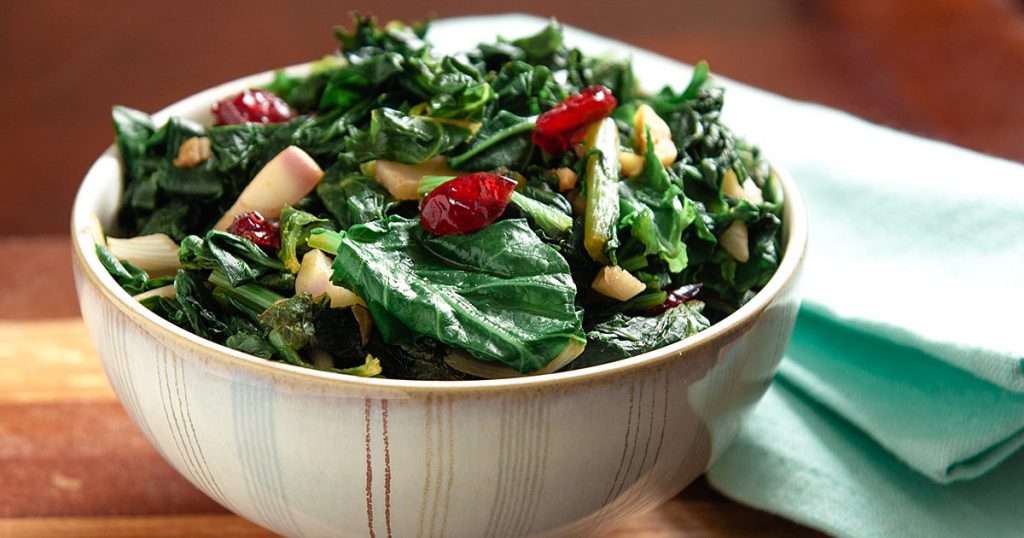 New Southern Greens
The sweet and tangy flavor of cranberries complement the peppery greens just perfectly and ginger and garlic add sparkle.
Get the Recipe

Finally, if you’re looking for something a little different, you have to try Moin-Moin, a savory Nigerian cake that can be eaten as part of a meal or as a snack. I’m told that you can make Moin-Moin much more easily if you use black-eyed pea flour instead of dried beans. It’s definitely worth looking for! 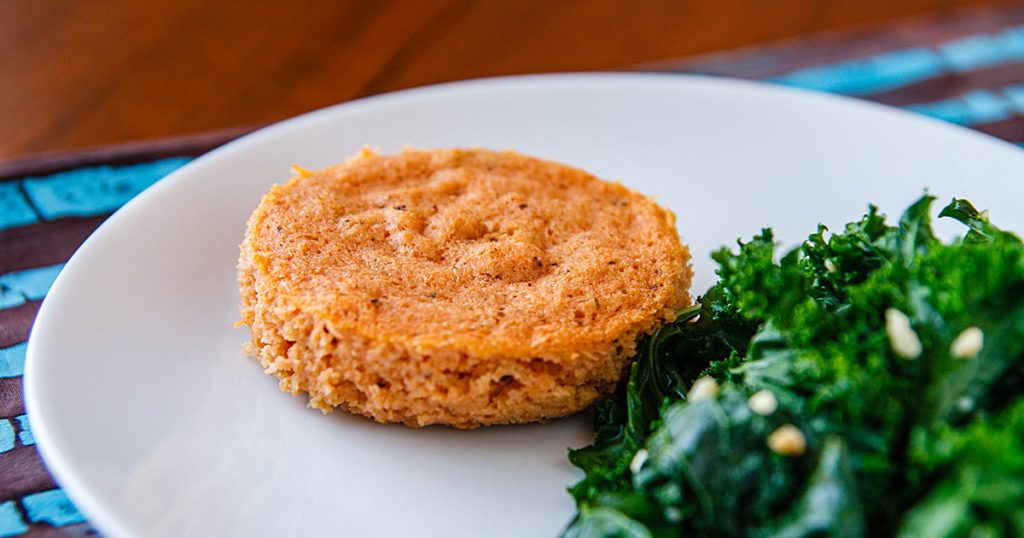 Moin-Moin (Nigerian Savory Black-eyed Pea Cake)
Moin-moin is very versatile: You can eat it cold or hot, as a part of a meal or as a snack. There are similar dishes made of ground black-eyed peas throughout western and central Africa, including akara, a fritter with mostly the same ingredients.
Get the Recipe