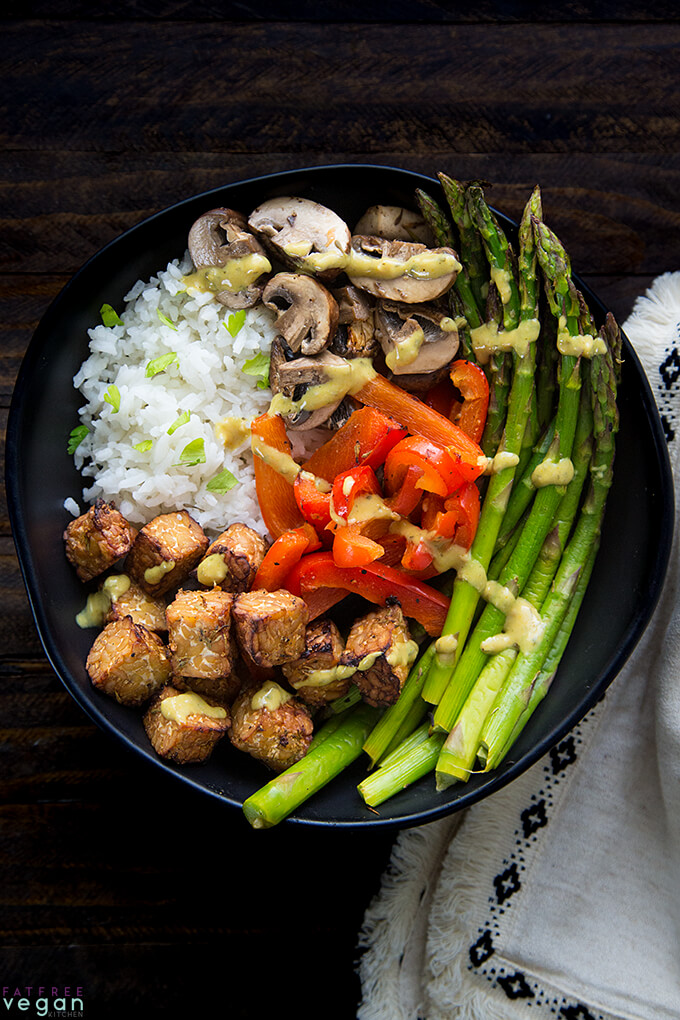 A couple of weeks ago, I became intrigued with the idea of doing sheet pan dinners in the air fryer. A sheet pan dinner is basically a one-pot meal that you cook in a pan in your oven on a baking sheet or sheet pan. Sheet pan dinners have been popular on food blogs lately, but I don’t think anyone else has been crazy enough to attempt to cook one in an air fryer–until now.

(For those of you without air fryers, let me assure you that I will also give oven directions.)

My air fryer is not the typical stand-alone, single use appliance. It’s a Breville Smart Oven Air, and compared to the typical air fryer, it is HUGE. Compared to the typical toaster oven, it is even HUGER. A normal-sized baking sheet or lasagna dish can easily fit inside it. It has a strong fan to air fry foods and a metal mesh basket that holds a ton. Between the strong fan and the mesh basket, food can cook on all sides without needing to be turned.

The Breville isn’t as fast as a regular air-fryer, but it’s still faster than baking in the oven. It makes it easy to cook a whole dinner at once; if you have a regular air fryer, you will probably need to cook some of the ingredients separately.

I wanted to use the ease and speed of the air fryer to make a “one-pot” meal similar to the sheet pan dinners I’ve been seeing. So I first tried it out using some tofu and vegetables that I had on hand: 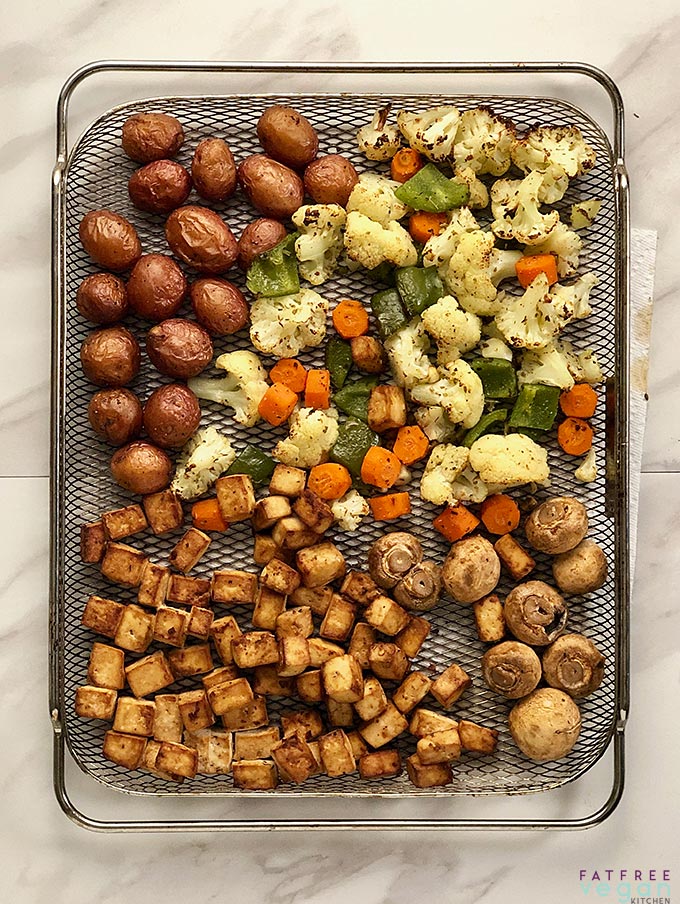 It was a huge success! I started by marinating the tofu and mushrooms briefly in soy sauce and Trader Joe’s Umami Seasoning (which gives a savory yet spicy kick.) I pre-steamed tiny potatoes for a few minutes to get them partially cooked, and seasoned them and the cauliflower and carrots with salt, pepper, garlic powder, and herbs.

Then I set the Breville to Air Fry and the temperature to 450F. I set a generous 25 minutes on the timer and put the air frying basket in the oven to preheat. Once it was hot, I added the tofu in a single layer. I let it cook for 10 minutes and added the potatoes to another section of the basket. After 2 more minutes went by, I added the cauliflower and carrots. Four minutes later I added the mushrooms. They were done–as was everything else–in about 4 more minutes.

All together it took about 20 minutes to cook, and everything was done at the same time.

I first posted the photo above on Instagram and in my FatFree Vegan Air Fryers group, and I received a lot of encouragement to keep experimenting. My next attempt was so good that I just had to share the exact recipe, along with some of the things I’ve learned about using the Breville Air to make sheet pan dinners. 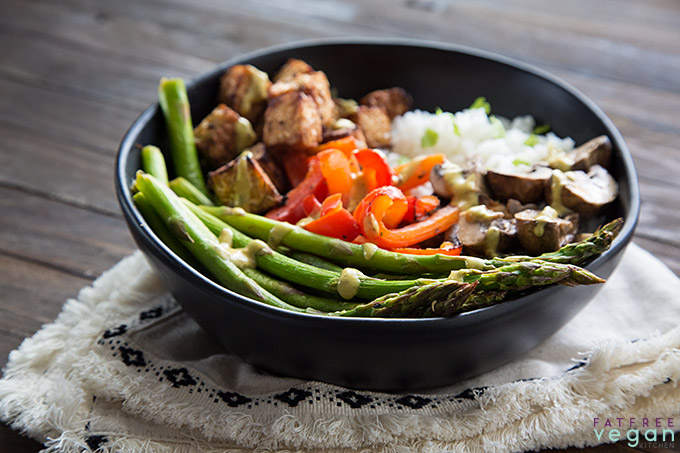 Making Sheet Pan Dinners in the Air Fryer (or Oven)

Sheet pan dinners generally contain a protein and complementary vegetables. In a vegan sheet pan dinner, the protein is often tofu or tempeh, but even pre-cooked seitan, packaged meat substitutes, or cooked beans can be used.

One of the tricks for making a successful sheet pan dinner in the air fryer–or in the oven–is adding the ingredients to to the pan at the right time. If you want your vegetables to be cooked but still retain a crisp texture, you have to be careful not to overcook them. Cubed tofu takes about 20-25 minutes in the Breville, and cubed tempeh takes about 16 minutes; root vegetables like potatoes can cook in a similar time if they’re cut small enough, but most other vegetables will be overdone if you put them in at the same time as the tofu, tempeh, or potatoes. So you need to stagger the timing at which you add them to the air fryer.

Figuring out the timing is tricky: Almost all lists of air fryer cooking times were created for single-use air fryers, like the Phillips and Go Wise. The Breville holds a lot more, but it cooks more slowly, even when turned up to a much higher temperature. And, if you fill it up with a whole dinner, you may need to add a couple of more minutes to the cooking time. It’s very much a “play it by ear” enterprise, and the more you experience you have cooking in the Breville, the better you will be able to estimate cooking times. 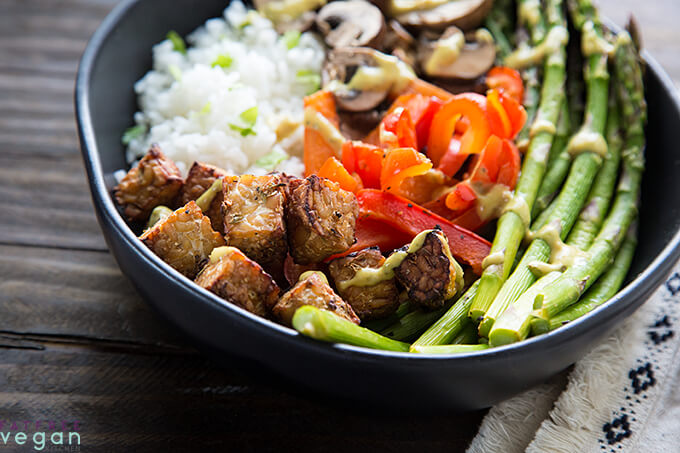 While there are no resources for making sheet pan dinners in the air fryer, there are some resources that can help you put together your own dinners.

This article in the New York Times contains some good general guidelines for making sheet pan dinners in the oven. This follow-up has some great ideas for vegetarian sheet pan dinners, which you may need to veganize.

Blue Jean Chef has an air fryer cooking times chart that looks pretty accurate. Remember, if you’re using the Breville, you will probably need to increase the temperature 25-50 degrees and give it more time. (For instance, I often cook thin French fries in the Breville, and I set it on 425F and cook for about 20 minutes; the 12 minutes the chart gives for cooking 1-inch chunks of potato does not seem accurate at all.) 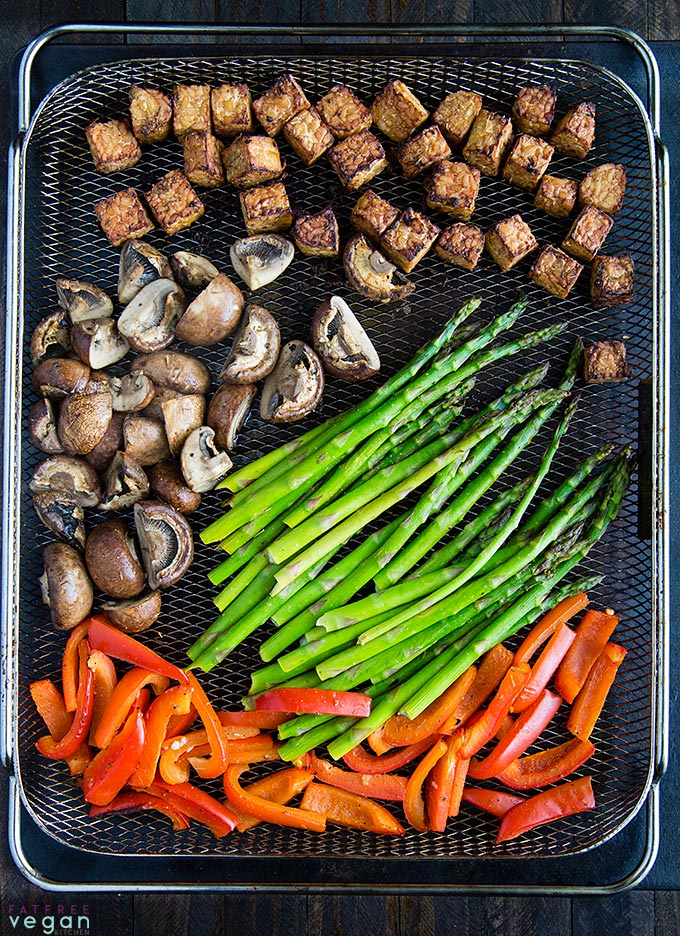 Tempeh in the Air Fryer

For my second air fryer sheet pan dinner, I decided to experiment with tempeh, a soy product my husband absolutely loves. I knew I wanted it to pair it with asparagus and thought that a light lemon flavor would complement both foods. Tempeh benefits from a good marinating, so I planned ahead and let it marinate several hours before cooking. If you have the time, I really recommend letting it marinate as long as a day; stir it every now and then to make sure all the tempeh cubes get flavored.

Air frying gives tempeh a great texture–dense and slightly crisp on the edges. I wanted the asparagus to retain its crispness and not get dried out, so I watched it more carefully than the other ingredients; a few of the thinner spears were done before the others, so I whisked them out of the air fryer a little early.

You may find that you need to play with the timing to get the vegetables done to your liking. My best advice is to stand by and watch them so that nothing burns. When you’re air frying without oil, food can dry out more easily, but careful attention can make sure that doesn’t happen. 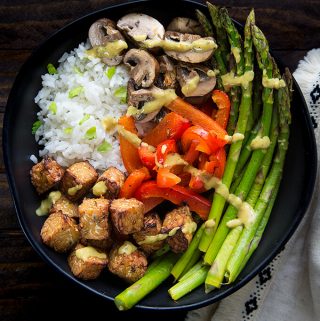 If you want to make this in a regular air fryer, you will probably need to cook each ingredient separately. I suggest setting the temperature to 375 and cooking for a little less time than I give. I drizzled each bowl with about a tablespoon of my Tahini-Chickpea Dressing, which added about 13 calories per serving, but you can use any salad dressing or sauce you like. Other good options would be Spicy Chipotle Dressing or Lite Goddess Dressing. Nutritional info in the box below is for 2 large servings and does not include dressing. Each large serving is 8 points on Weight Watchers Freestyle, including 3/4 cup of white rice. Without the rice, each serving contains 309 calories, 7g fat, 36g carbohydrates, 17g fiber, and 32g protein. Without rice, a serving is 4 points.
Nutrition Facts
Lemon Tempeh Air Fryer Sheet Pan Dinner
Amount Per Serving (2 large servings)
Calories 463 Calories from Fat 63
% Daily Value*
Fat 7g11%
Saturated Fat 1.7g11%
Trans Fat 0g
Polyunsaturated Fat 3.44g
Monounsaturated Fat 1.7g
Cholesterol 0mg0%
Sodium 460mg20%
Carbohydrates 70g23%
Fiber 17g71%
Sugar 11g12%
Protein 35g70%
* Percent Daily Values are based on a 2000 calorie diet.

I hope you’ll try one of my sheet pan dinners–either in the oven or air fryer–and experiment with your own combination of ingredients. Let me know what you discover! 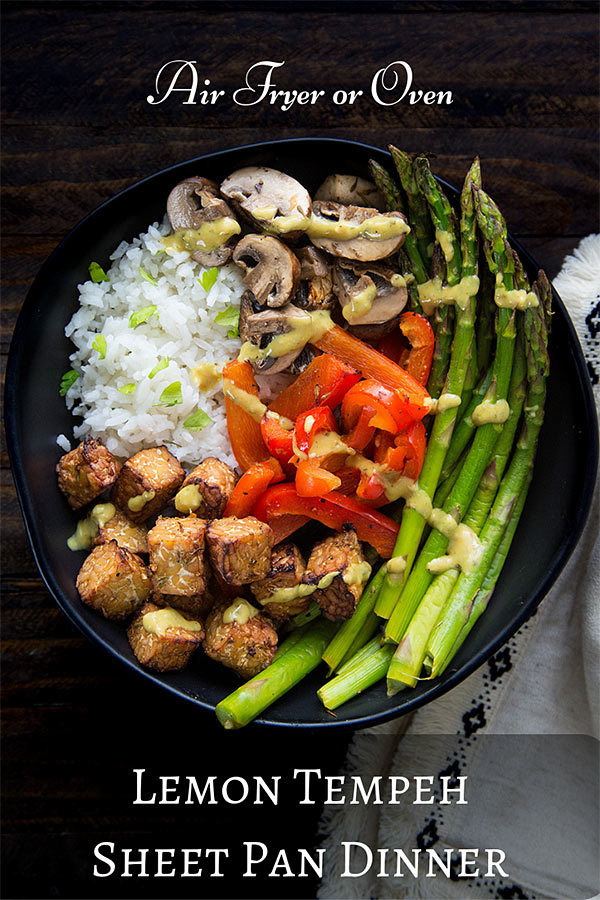