I don’t use the crockpot as often as I probably should, but it came in handy last night when I had a meeting around the time I’d normally be making dinner. Around 3:30 in the afternoon, I started chopping vegetables, and by 3:45, Crockpot Eggplant and Tomato Stew with Garbanzo Beans was in the crockpot and cooking.

The recipe makes a lot. This is how filled my large-ish crockpot was: 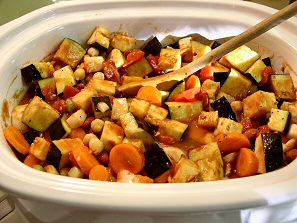 I did use a whole can of kidney beans instead of the cup called for, but even with the recommended amount of beans called for, this is a large recipe and would overfill a smaller crockpot.

In addition to increasing the kidney beans, I also increased the seasonings near the end of the cooking time; around here, we like our food highly seasoned! But the biggest change is in the cooking time. I let it cook for the full 4 hours on high, and it was still undercooked. I had to scoop out about half of it, put that into a microwavable dish, and nuke it for 5 minutes because we were starving. I think 5-6 hours on high is probably more accurate.

My daughter, well, she said she liked only the beans and chickpeas. She’s not a big fan of eggplant, but she did eat a small bowl of it (before asking for dessert, a banana). It’s probably a 4 or a 5 for her.

I served this with a large salad. Simple meal, but filling.