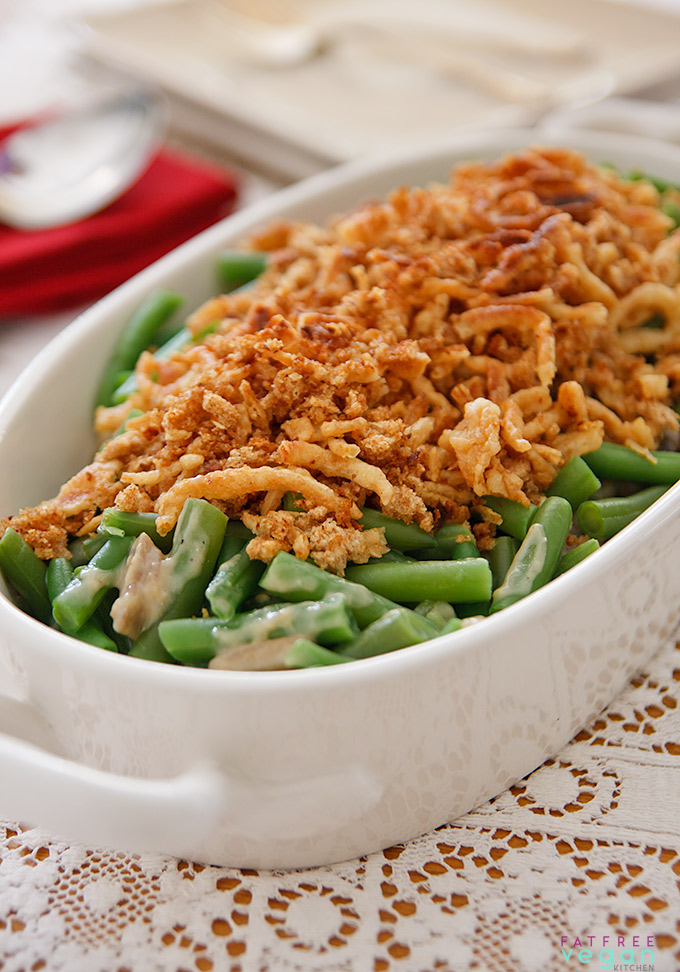 I had to write a quick post about this recipe because D. and I just had some for lunch and oh my gosh, it is good! Truly, we were scraping the casserole dish clean.

This is adapted and plagiarized from Alanna’s World’s Best Green Bean Casserole, and I have to say, the name fits. I made up a full recipe to bring to Thanksgiving at the in-laws’ tomorrow, but I set aside this small dish to bake today just for us (and to photograph just for you). Though I can’t say that either my husband or I were fans of green bean casserole in general, we’re now fans of this one. 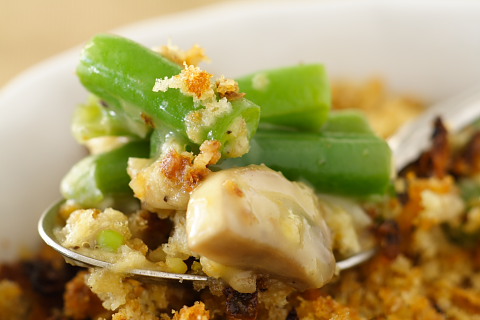 Warning: This is not a fat-free recipe. I’ve veganized it and taken out some of the butter/margarine, but there’s still Earth Balance margarine in the topping and some fat in the soy creamer. And oh, those fried onions! (Which I accidentally used a whole can of, instead of the half can the recipe called for.)

What can I say? You could try it completely fat-free as outlined in the recipe’s notes, but for a special occasion, this isn’t a huge an amount of fat. And the taste is amazing. No one will know it’s vegan! 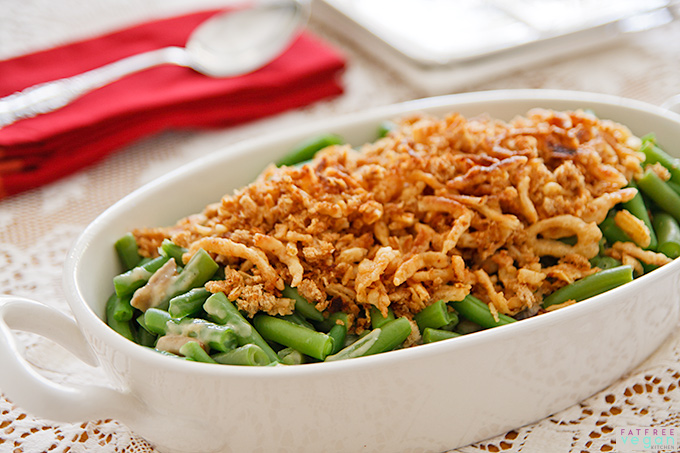 Twelve years (yikes!) have gone by since I posted this recipe, and since then it has become the recipe most requested by my extended family every Thanksgiving and Christmas. It has become a tradition for us and I hope it becomes one for you.

Thanks to Alanna for the recipe, and thanks to all of you readers for your support through all these years I’ve been posting vegan recipes. Your comments and input make blogging fun!

If you’re looking for more holiday recipes, don’t forget to check the Thanksgiving and Holiday sections! 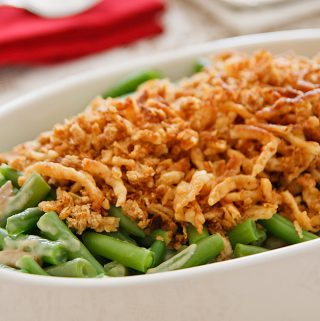 You could make this healthier by using caramelized onions instead of fried--just cook them slowly until they begin to brown and then mix them with the bread crumbs. You could also omit the margarine.
Prep Time 15 minutes
Cook Time 30 minutes
Total Time 45 minutes
Servings 8
Author Susan Voisin

*Sodium figure is inflated because it includes all the salt in the bean-cooking water, most of which is not actually absorbed by the beans. Alternate topping: You can make this even lighter by replacing the topping with pan-"fried" onions (without oil) and panko, seasoned with black pepper. Sauté about 1 cup of chopped onions and mix with about 2 cups of panko.
Nutrition Facts
The Best Vegan Green Bean Casserole
Amount Per Serving (1 serving)
Calories 102 Calories from Fat 34
% Daily Value*
Fat 3.8g6%
Sodium 1026mg45%
Carbohydrates 14g5%
Fiber 3.8g16%
Sugar 3.7g4%
Protein 3.8g8%
* Percent Daily Values are based on a 2000 calorie diet.

Course Side Dish, Vegetable
Cuisine Holiday, Vegan
Keyword fresh green bean casserole, vegan green bean casserole
Have you made this recipe?Mention @SusanFFVK and tag #fatfreevegankitchen in your photos on Instagram.
Share on Facebook Pin This Recipe Share by Email