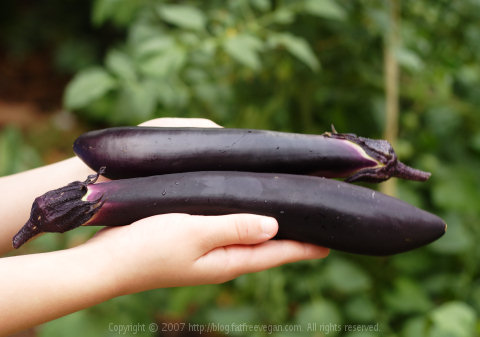 Over the weekend, we harvested the first of our Japanese eggplants, and I knew immediately what I wanted to do with them. Our favorite sushi restaurant used to have this eggplant appetizer that I loved until they slowly stopped serving it. I say “slowly” because at first it was unavailable every now and then, when the eggplants weren’t in season; then it was unavailable most of the time; finally, it disappeared from the menu altogether, and I was left craving this eggplant dish that I couldn’t get anywhere else.

What is it? It’s actually a very simple dish, a fact I found out after several more elaborate cooking attempts that never came out quite right. Japanese eggplants are broiled (or grilled, if you have the time), spread with a sweetened miso mixture, and then broiled again for a few seconds. The results are creamy, smoky eggplant with a sweet and salty sauce that will make you scream out “Yes Yes Yes!” But fortunately, you can keep from embarrassing yourself in public if you make it at home. (Oh, if only I’d known that sooner!)

You’ll notice that my recipe contains agave nectar, which is hardly a traditional Japanese ingredient. You can choose to substitute sugar, or you can try another natural sweetener, but you may need a little more because agave is sweeter than sugar and much sweeter than, for example, rice syrup or barley malt syrup. Stay away from maple syrup or any sweetener that’s strongly flavored, though; the sweetener’s just there to sweeten, not to deliver any flavor. 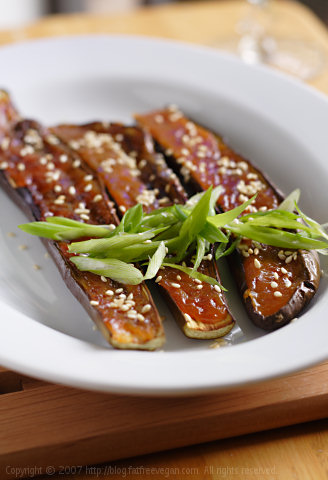 Some Notes about Miso:

Look for white miso (which is actually more like beige in color) at your local natural foods store or in Asian grocery stores. You will find better prices in the Asian markets, but check labels carefully because many of the brands of miso there contain fish (bonito) extracts.

Though miso has many health benefits, it is very high in sodium, a fact that should be kept in mind by anyone following a low-sodium diet (and vegans may have added reasons to be concerned about sodium). Look for low-sodium miso and use it if available.