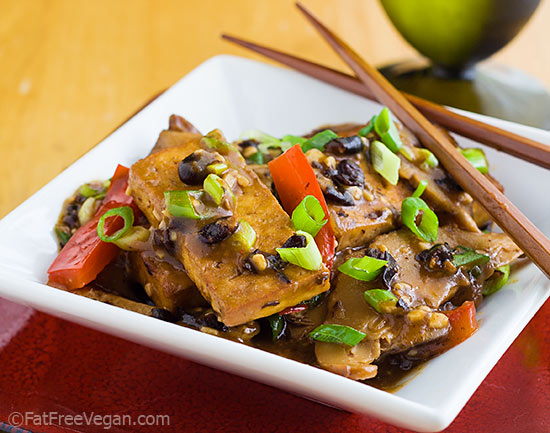 I don’t often cook other people’s recipes, at least not exactly as written. I like to get inspiration from cookbooks and other people’s blogs and then go off and do my own thing, incorporating the techniques that have worked well for me in the past. But when I saw the recipe for Peng’s Home-Style Bean Curd on Barbara Fisher’s Tigers and Strawberries, I just knew I had to make it exactly—well, almost—as written.

Barbara is a blogger and cook who inspires confidence; she has attended culinary school, worked in restaurants, and taught cooking classes. Her particular love and specialty is Chinese cooking, and she writes about it in clear, evocative language that somehow summons up the taste of the food as she guides you through the steps in preparing it. Reading the recipe for Home-Style Bean Curd, I could imagine exactly how it would taste, full of the pungency and saltiness of fermented black beans.

And I wasn’t disappointed. One bite of this dish transported me back to a little Chinese restaurant back in South Carolina that D and I loved, instantly conjuring up its dark, candle-lit booths and strange door chime that chirped “Thanks for coming” whenever the door opened.

From the outside, it looked like nothing special, one Asian restaurant among the many that graced the strip malls of that neighborhood, but once inside, visitors were greeted with tantalizing aromas and a diverse menu that included a whole host of vegetarian dishes. It’s amazing how many memories a taste can bring back; I didn’t realize how much I missed that place until this tofu dish reminded me. 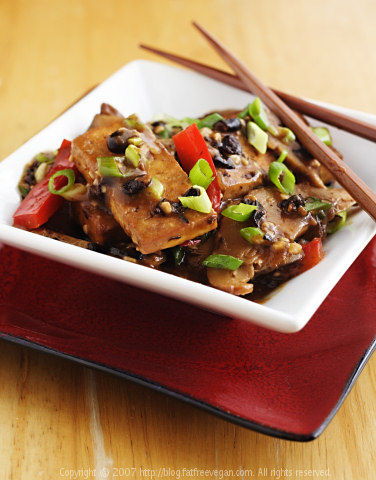 Of course I made a few changes to the recipe, but Barbara had already suggested the main one, that vegetarians replace the pork with dried shiitake mushrooms. And though I trust Barbara when she asserts that it’s best with deep-fried tofu, I hope you’ll trust me when I say that baked tofu worked wonderfully for me. (I’m sorry, Barbara; I just can’t bring myself to fry anything!)

Finally, I didn’t have fresh red chiles, so I substituted dried red pepper flakes (heresy, I’m sure). Next time I make this—which will be soon because I’ve been craving it ever since we ate it—I’ll make sure I have fresh peppers on-hand. Thanks, Barbara, for a wonderful dish! 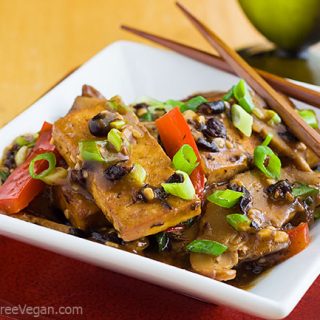 I used black beans that were packed in oil and pressed them lightly to remove as much of the oil as possible. If you are using the type of fermented black beans that are packed dry, you may want to lightly crush them before adding them to the skillet. Also, adding a little water or oil to the skillet will make stir-frying them with the garlic easier. Adapted and re-adapted from Revolutionary Chinese Cookbook: Recipes from Hunan Province.
Nutrition Facts
Home-Style Tofu with Shiitake Mushrooms
Amount Per Serving (1 serving)
Calories 190 Calories from Fat 67
% Daily Value*
Fat 7.4g11%
Sodium 675mg29%
Carbohydrates 16g5%
Fiber 5g21%
Sugar 2g2%
Protein 16g32%
* Percent Daily Values are based on a 2000 calorie diet.