Red lentils and cauliflower are simmered with the Bengali 5-spice blend Panch Phoran in this delicious vegan dal. 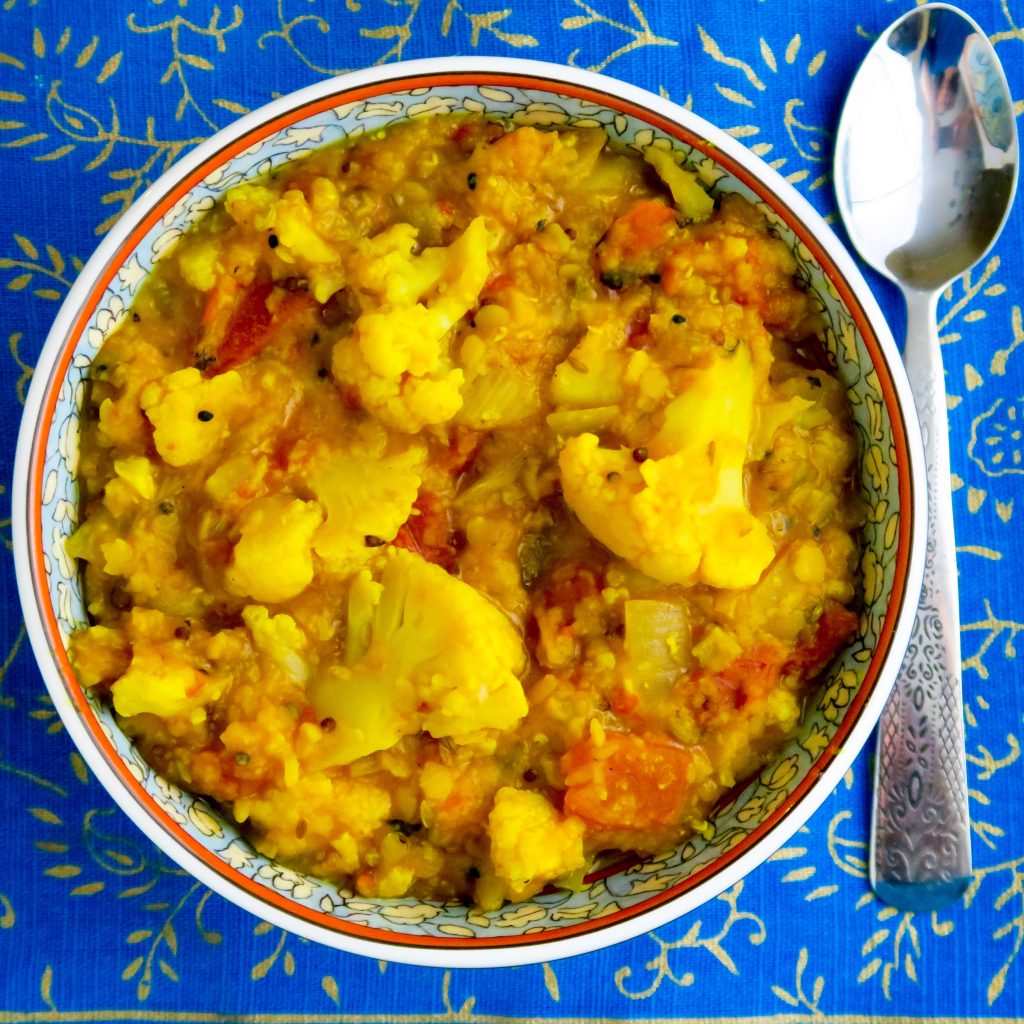 Sometimes a recipe comes along that’s so spectacular that you feel compelled to climb your way up to the top of the nearest alp and sing like Julie Andrews, giddy and overflowing with such love for the world that the power of your emotions threatens to send you skidding down the mountain on the backside of your lederhosen.

Or you could just blog about it.

Either way, this is one of those recipes. 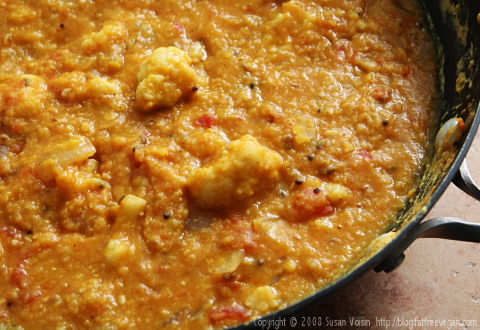 I know it doesn’t look like much, a little lumpy and gloppy and overly orange, but this combination of red lentils and cauliflower tastes out of this world, all because of panch phoran.

Panch phoran (also spelled panch phoron and panch puran) is a Bengali blend of five spices– fenugreek, mustard, kalonji (nigella), fennel, and cumin, in equal amounts. (In Bengal, radhuni would be used instead of mustard, but it’s not available in the U.S.) You can buy this spice blend in Indian grocery stores or you can make it yourself. Since I would have had to go to the Indian store to buy fenugreek and kolonji seeds, it was just as easy for me to pick up the pre-mixed package for $1.99. 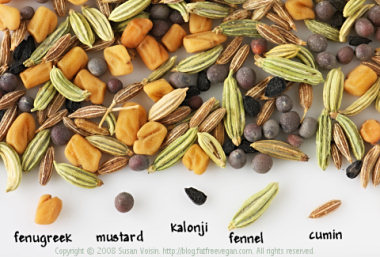 It may well be the best two bucks I’ve ever spent. I’ve cooked with 4 of these spices before and love them alone and in combination with other seasonings, but somehow combined, they turn into a kalidoscope of flavor. Each bite tastes different from the next–first a little cumin combined with mustard, then fenugreek with fennel, and so on, the flavors shifting and blending with each other and the other ingredients. I’m not equal to the challenge of describing their flavors, but Barbara at Tigers and Strawberries devoted an entire post to panch phoran that’s sheer poetry. She writes:

When I drop those seeds into a pan of hot oil with a sizzle and a clatter, I am called backward to a time long ago and forward to a time that never was, into memory and dream, into a familiar strangeness. When I smell the wafting song of their voices coming together, I find myself very much at home. 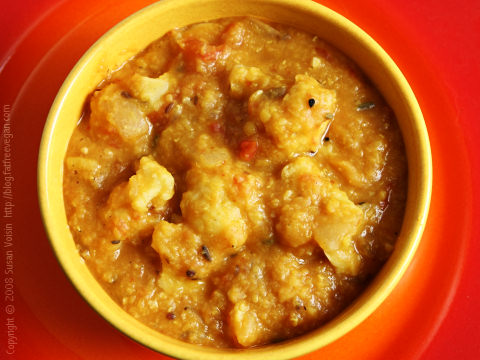 It was thanks to Barbara’s evocative essay that I went searching for panch phoron last week. After looking at recipes online and in some of my cookbooks (particularly Madhur Jaffrey’s World-of-the-East Vegetarian), I decided to make a fairly standard dal and add the seasoning to it.

Including cauliflower was a last minute idea–I just love a one-pot meal, so if I can get my vegetable and protein all in one pot, I’ll do it. I can’t find any precedent for mixing cauliflower and masoor dal, so don’t consider this an authentic Bengali recipe. Just consider it delicious–and kid-friendly, if my daughter is any indication. (It’s probably the first time she’s ever taken cauliflower to school in her lunchbox.)

Once you try panch phoran, I hope you’ll be as excited about it as I am. If so, here are a few recipes you can use it in: 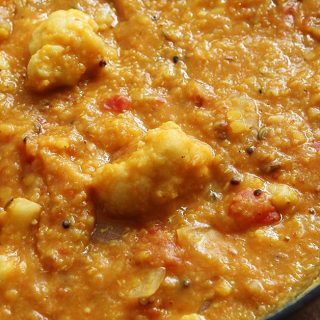 *Tempering the spices in just a tiny bit of oil keeps this dish low-fat while preventing the harsh flavor that can come from burned seasonings. If you absolutely refuse to use even minuscule amounts of oil, you can try dry-toasting the panch phoran, but you do so at your own risk! Each serving is zero points on Weight Watchers Freestyle plan.
Nutrition Facts
Cauliflower Dal with Panch Phoran
Amount Per Serving (1 serving)
Calories 193 Calories from Fat 9
% Daily Value*
Fat 1g2%
Sodium 378mg16%
Carbohydrates 34g11%
Fiber 16g67%
Protein 15g30%
* Percent Daily Values are based on a 2000 calorie diet.

Course Main Course
Cuisine Indian, Vegan
Keyword panch phoran, vegan dal
Have you made this recipe?Mention @SusanFFVK and tag #fatfreevegankitchen in your photos on Instagram.
Share on Facebook Pin This Recipe Share by Email 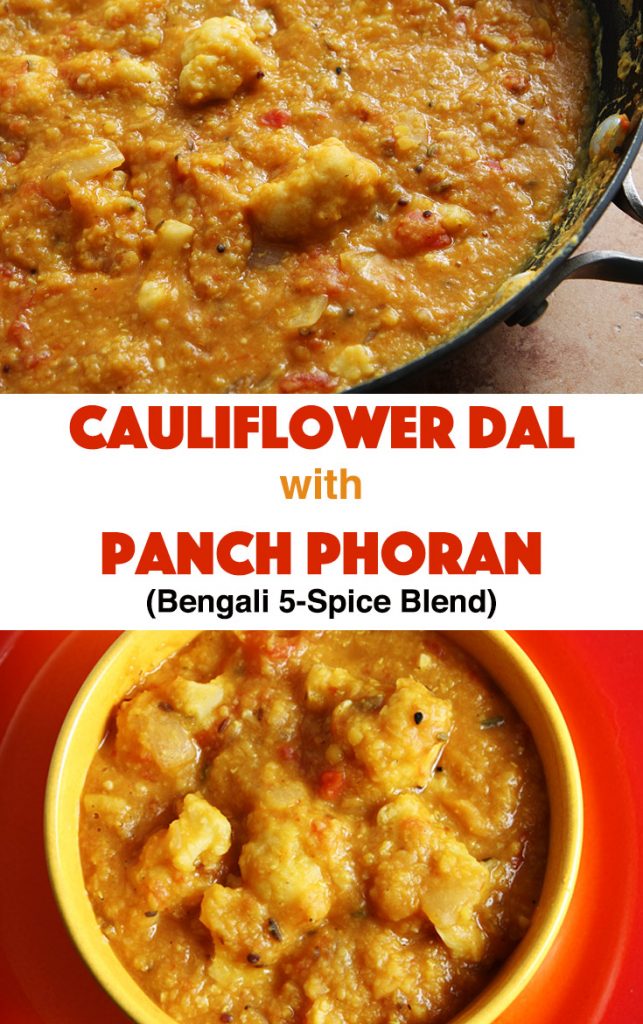