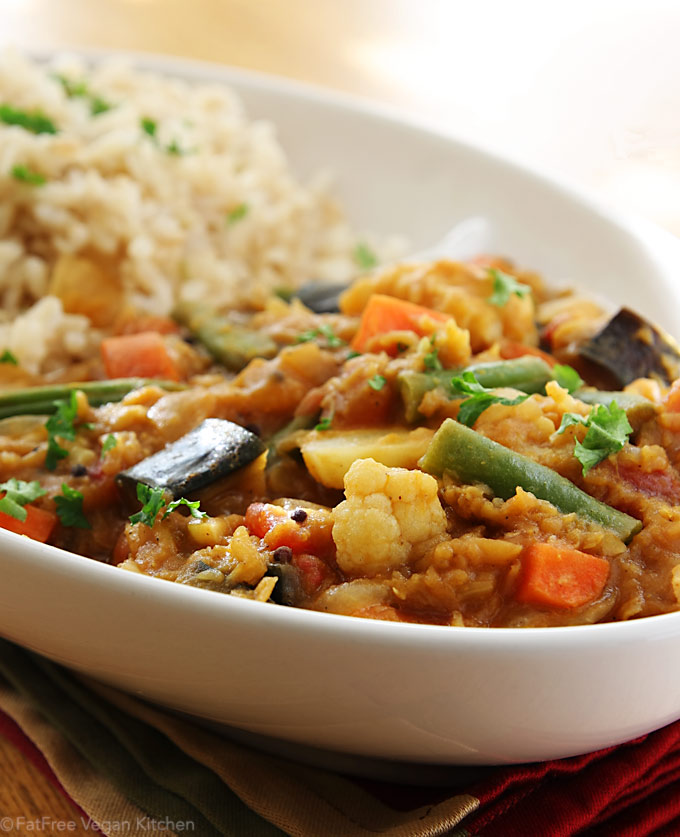 Robin Robertson, the prolific author of Vegan Planet and over a dozen other cookbooks, has just come out with a new one, and boy is it hot–literally. She recently contacted me to ask if she could send me a review copy of Vegan Fire & Spice, and being the heat-seeking eater that I am, I immediately said “Yes, please!”

Vegan Fire & Spice’s 200 recipes range from subtly spicy to tongue blistering, arranged by geographic region and labeled with symbols indicating the level of heat. But what may be most impressive about the recipes is that they don’t depend solely on hot spices for their flavor, so someone who doesn’t like spicy food at all can tone down or leave out the peppers completely and still enjoy a dish that’s deliciously seasoned. Most of the recipes are uncomplicated and don’t involve huge lists of ingredients.

Robin was kind enough to allow me to post a recipe of my choice, and deciding which one to make wasn’t easy, but Anshu’s Red Lentil Sambar had all the elements that I look for in a recipe: it was simple, low in fat, and full of vegetables. Though it requires more ingredients than most of the book’s recipes do, many of them are seasonings that are added all together.

I’ve reprinted the recipe exactly as it appears in the book, but I have to tell you that you can get away with using much less oil than the recipe indicates. I used about 1/8 teaspoon to pop the mustard seeds, and that was all. Even with reduced fat, this recipe was rich and hearty, a delicious dish that my whole family enjoyed. I’ll be making it again–as soon as I check out some of the other tempting recipes! 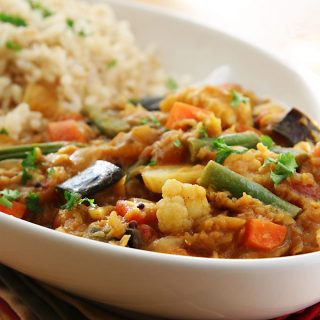