Perfect for breakfast or any light meal, this tofu-based vegan quiche is full of asparagus and mushrooms and uses a gluten-free brown rice crust. 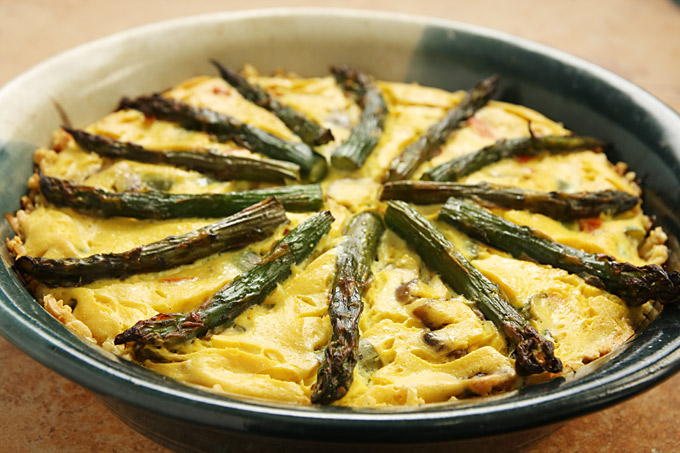 Chris, of the popular vegan food blog Eat Air, observed in a post last week that the overwhelming majority of vegan food bloggers are women. To address this disparity and provide some good male role models for his son, he posted a challenge to the men of the house: Cook something and then write about it.

When I read the post to D, he agreed to take on the challenge and began mulling over what he could cook. I’ve mentioned before that when we first started dating D impressed me with his cooking skills, wowing me with roasted vegetables in balsamic sauce, couscous with curried vegetables, and other delicious dishes that he created from his stash of vegetarian cookbooks. If he had the time, I’m sure he’d want to do more of the cooking around here–that is, if I’d let him. Cooking is the one domestic duty that I actually enjoy, so I tend to hang onto it as my “thing.” (I allow dish washing and cleaning the litter boxes to be his things.)

So, he was planning to do a little cooking over the weekend, but on Thursday morning, I woke up with lower back and hip pain that worsened over the next few hours so that by dinner time, I could barely walk. For the next three days, D took over all the household as well as parental duties, even spending all day Thursday at the district science fair with E (proud parent moment: she won 6th place in microbiology for her project on yeast). We ordered take-out on Thursday night, but for every other meal, D was in the kitchen cooking. Unfortunately, no photos were taken, dashing his hope of food blogging glory. Still, he was my hero, singlehandedly taking on everything while I sat by helplessly, back pressed up against an ice pack, popping pain killers and reading mystery novels. 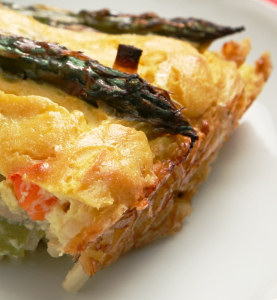 By Sunday night, resting, icing, and stretching exercises had reduced the pain so that I felt steady enough on my feet to attempt to cook. Sitting on an ice pack had given me a lot of time to think about what I wanted to do with the asparagus in my fridge, and I’d worked up quite a craving for quiche. Vegan quiche, that is. I could have added asparagus to my Mini Crustless Quiches, but I wanted something a little more filling. I decided to try making a full-sized quiche with brown rice as a gluten-free, fat-free crust.

I’m happy to report that it was an resounding hit, adult as well as kid-friendly. I’m not so happy to report that it remains a light meal–light in the sense that it won’t fill you up. Though I’ve written it up as 4 servings, the three of us finished the whole thing and would have put a big dent in a second one, had there been one. My advice for this quiche is the same as for the mini quiches: Serve it with plenty of side dishes or be prepared to make a double batch. 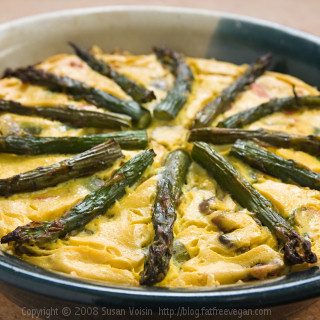 Asparagus and Mushroom Quiche with a Brown Rice Crust 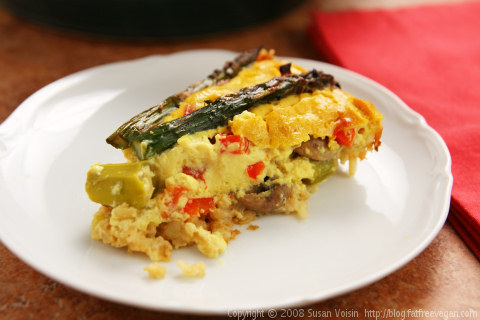