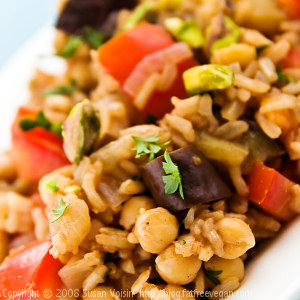 With the emerald green of the pistachios, the red of the tomatoes (which would resemble rubies if they were riper, summer tomatoes), and the purple eggplant, which if I squint my eyes up just right I can imagine are amethysts, I was tempted to call this cinnamon-infused rice “Jewel Tone Pilaf.”

The recipe is adapted from one in an article about Istanbul in an old copy of Gourmet, circa 2000. The same issue had a story about Iranian pistachios, which I was eager to try, but I was unable to find any shelled, unsalted pistachios in the Middle Eastern grocery store. When I finally found them at the Indian grocery, they weren’t, I’m sure, from Iran, but I was happy to get them whatever their origin. They add a wonderful touch to this simple recipe, which I’ve adapted almost beyond recognition. I used brown basmati rice instead of white and changed the cooking method to accommodate the longer cooking time; I substituted parsley for dill and added chickpeas; and instead of raisins, I used the tiny dried barberries known as zereshk in Iran, which impart a tarter flavor than raisins. They’re not easy to find, but if you’re interested, look for them in Middle Eastern markets. If you can’t find them, stick with raisins, which combine with the cinnamon to give this pilaf a very sweet taste. 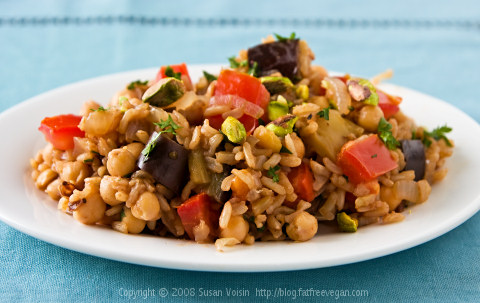 Turkish Pilaf with Pistachios and Chickpeas

This is one of those dishes that taste better the second day, so plan for leftovers–or just cook it a day ahead.

Optional: Soak a few of the zereshk in hot water; just before serving, drain them and toss them with the pilaf. They will hold together better than the zereshk that were cooked with the rice.