Jump to Recipe Pin Recipe Share on Facebook
“If everyone lived on mashed potatoes, the world would be a happy place.”
–E. Voisin, Food Philosopher and Potato Lover 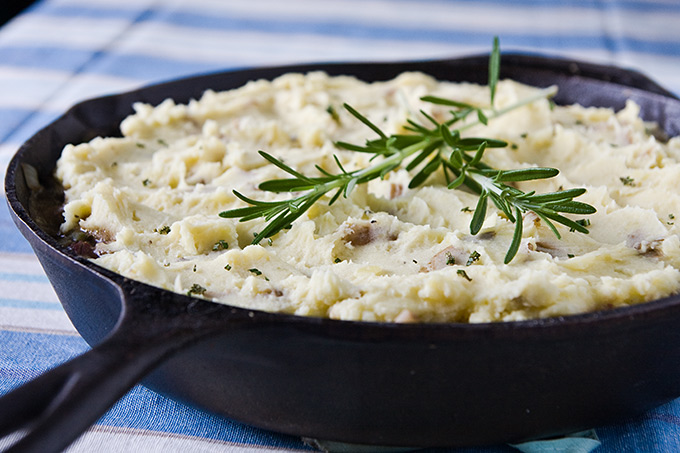 I have a confession to make, the kind of deep dark secret that I would tell only a very close friend, preferably a non-judgmental one who doesn’t cook or care about food.

Here goes: For the first several years of her life, the only mashed potatoes I regularly cooked for my daughter were the kind that come powdered in a box. Shocking, I know. Even more shocking: She loved them, or thought she did. She often ate them as a snack when she was hungry for something substantial, and as she got older, she learned to make them for herself. I’m not proud of this, and in my defense, I tried to buy the “good” kind, the ones without extra, non-potato ingredients. But the fact remains that for years, E thought that mashed potatoes came out of a box.

It’s not that I never made real mashed potatoes, but apparently until recently they didn’t make much of an impression. But then a couple of things happened.

First, “Seaside Cakes Nights” became a family tradition. Our local natural food store and restaurant, Rainbow Grocery, started serving these delicious tofu-based, seaweed flavored croquettes (similar to my “crab cakes”) as their special every Thursday. Along with the seaside cakes come coleslaw and real mashed potatoes drizzled with a light gravy. The restaurant is open for lunch only, but leftovers go to the deli counter in the store where we pick up a complete meal every Thursday night. We’re all addicted, and hardly a Thursday goes by that we don’t splurge on this meal. (It’s Thursday as I write this, so you know what’s on the menu tonight!)

Sometime after this Thursday tradition started, E went into the kitchen to make herself a snack of instant mashed potatoes. It didn’t take more than one mouthful before she noticed that, “Hey Mom, these things don’t have any flavor!” She never finished that plate of potatoes and hasn’t wanted instant potatoes since.

So these days, I mash a lot of potatoes. I buy the Yukon golds and mash them with the skins on, to keep all the fiber and vitamins. I don’t add any any margarine, just a little soymilk and some of the potato cooking water, and you know what–we all like them better than the ones from Rainbow.

My time-saving trick is to use my KitchenAid stand mixer to do the mashing–it’s quick, and they come out lump-free. (My other confession is that this is about the only thing I use my KitchenAid for, despite the promise I made to my husband when he gave it to me for my birthday last year to use it to make bread. It’s become the world’s most expensive potato masher.) 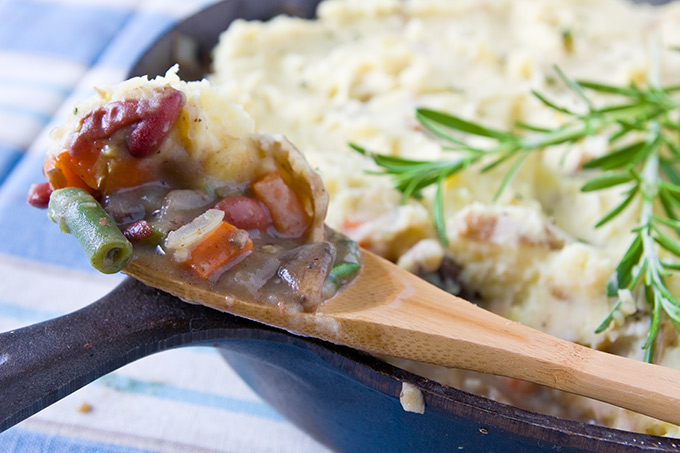 Anyway, that was a long digression, the only point of which is this: My daughter loves mashed potatoes. So, when she saw me making them last night, she got all excited and started dancing around. But then she took a look in the skillet simmering on the stove and said, with a disgusted intonation that only a child can muster, “What is that?!”

I ignored the tone and explained to her the concept of shepherd’s pie, a traditional English dish of meat (generally lamb) and vegetables baked with a topping of mashed potatoes. But, I went on, since I was making a vegan version, I was calling it a Gardener’s Pie. And I wasn’t going to bake it but make it much more quickly on top of the stove. “Well, whatever,” she snorted. “It looks yucky, and I’m just going to eat the mashed potatoes off the top.”

Somewhere along the line, her plans changed. I think it was when I was taking the photo of the pie in the spoon. She asked if she could have what was on the spoon after I finished shooting it, I agreed, and she got herself a plate. Pretty soon, she was back with her plate, asking for more. By the third time she helped herself, she was exclaiming that this was her New Favorite Dish, fourth in line behind lasagna, mac and cheese, and sushi. Now that’s rare praise! But the kid has good taste. We all loved it so much that it’s going on the regular dinner rotation, and it may even supplant Seaside Cakes. 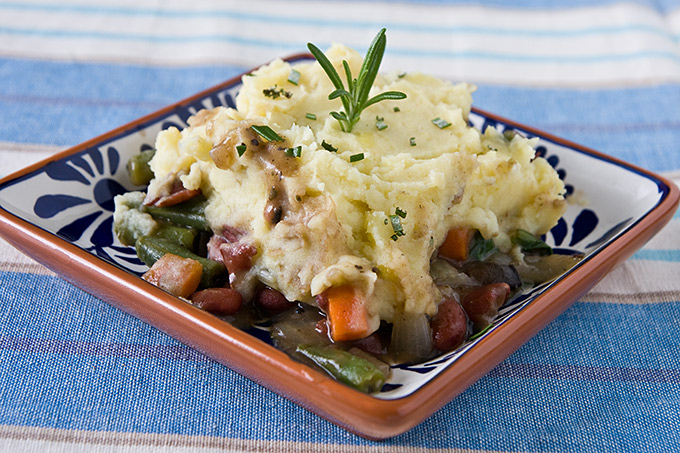 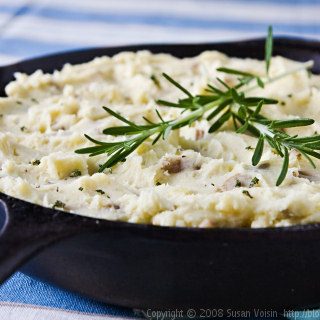 You won't have to heat up your oven to make this vegan shepherd's pie; all you need is a skillet!
Prep Time 20 minutes
Cook Time 45 minutes
Total Time 1 hour 5 minutes
Servings 6
Author Susan Voisin

I used kidney beans here because I like their flavor and texture in this dish. But feel free to substitute about 1- 1/2 cups of any cooked beans or lentils. Or, if faux meats are your thing, rehydrate some TVP, crumble up a couple of Boca burgers, or chop up some seitan and use it instead.
Nutrition Facts
Skillet Gardener's Pie (Vegan Shepherd's Pie)
Amount Per Serving (1 serving)
Calories 272 Calories from Fat 9
% Daily Value*
Fat 1g2%
Sodium 46mg2%
Carbohydrates 56g19%
Fiber 11g46%
Protein 13g26%
* Percent Daily Values are based on a 2000 calorie diet. 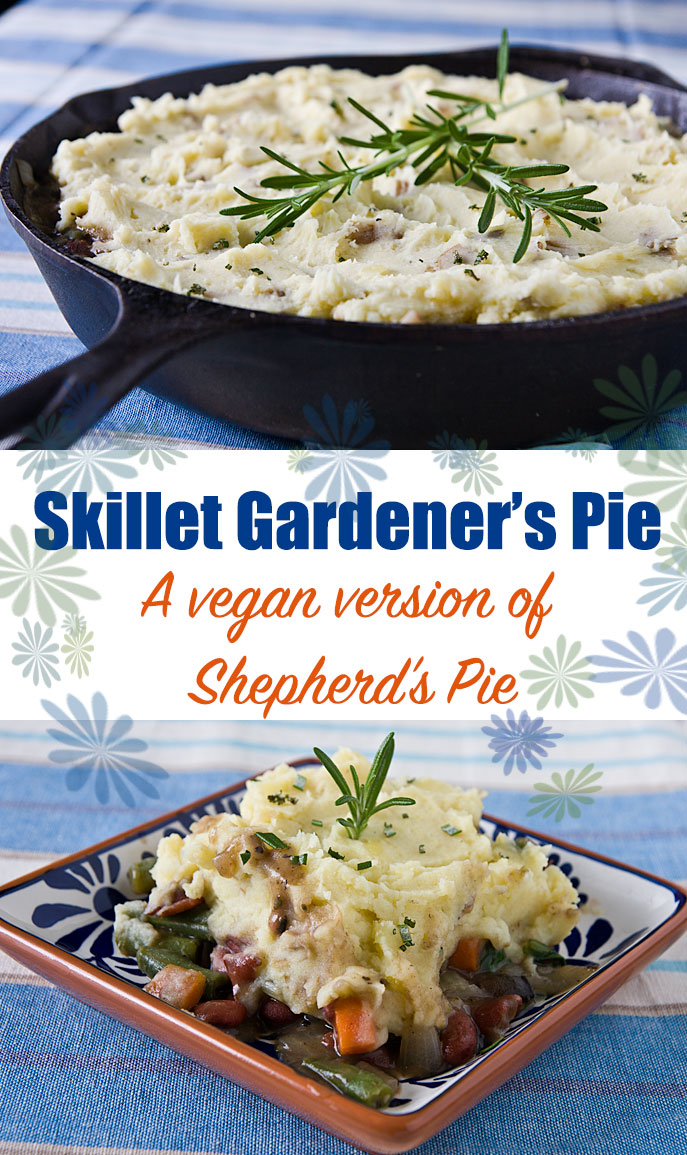