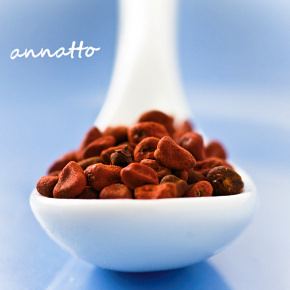 When it comes to seasonings, I’m a compulsive buyer. When I see an herb or spice that I’ve heard of but never used, I can’t pass up the opportunity to buy it—even if I have no idea what to do with it. I’m particularly bad about this when I’m ordering from Penzey’s or The Spice House; I’ll think, “Why not add a little jar of ajwain seed or Szechuan peppercorns to my cart? I’m paying for shipping anyway.”

That’s exactly how I came to own a jar of annato seeds, which I promptly put in my spice cabinet and forgot about.

Then a few days ago I saw the recipe for Lemon Achiote Grilled Tofu on 101 Cookbooks. Heidi used annatto (also known as achiote) in a marinade for a delicious-looking grilled tofu. I remembered my unused annatto seeds and started doing some research to find out what exactly they are and how they’re traditionally used.

Annatto seeds come from the annatto (no surprise) or lipstick plant (bixa orellana) and are used as both a seasoning and food coloring. The brick red seeds are prized for the orange-yellow color they lend to foods as well as for their flavor, which is subtle and deep rather than pungent or spicy. In the Caribbean, the seeds are often fried in oil and strained out, and the oil used to fry vegetables or meat.

In Mexico, annatto seeds are often ground along with pepper, cumin, and other spices and combined with the juice of Seville or sour oranges to form a paste, recado, used to marinate meat. The most popular dish they’re used in (at least if you believe Google results indicate popularity) is pork pibil, in which pork is marinated in recado and then wrapped in banana leaves and baked in a stone pit, grill, or oven. 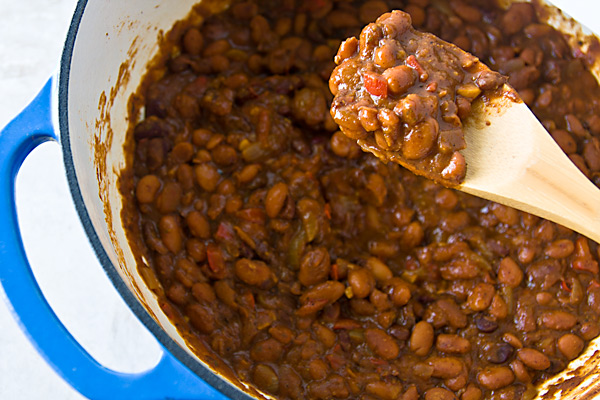 The recado seasoning sounded like something I’d like to try, but without the pig, of course. So I took the basics—annatto, black pepper, cumin, allspice, orange juice—and used them to season a pot of slow-cooked beans, sort of a cross between chili beans and barbecued beans. I used two cans of pinto beans and one can of mixed (pinto, kidney, and black) beans and allowed them to simmer on the lowest setting on my stove for an hour and a half. (I would have used the slow cooker but was afraid that mine is too large for this.)

The results were delicious—slightly sweet, slightly tart, but with a rich flavor underneath that must have come from the annatto seeds because it didn’t taste like anything I’ve had before. It was subtle but worth the trouble of making the seasoning mix. 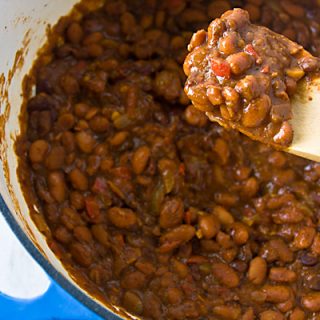 If you can’t find annatto seeds, substitute regular or smoked paprika; the taste will be different, but good. You’ll use only about half of the seasoning mix in this recipe, so save the rest for future experimentation.
Prep Time 15 minutes
Cook Time 1 hour 40 minutes
Total Time 1 hour 55 minutes
Servings 6
Author Susan Voisin

This should cook well in a slow cooker on low for 4-6 hours. Sodium count below assumes the use of canned, salted beans and 1 teaspoon of salt. You can reduce it by 387mg just by omitting the salt.
Nutrition Facts
Achiote Beans Recado
Amount Per Serving (1 serving)
Calories 219 Calories from Fat 18
% Daily Value*
Fat 2g3%
Sodium 1316mg57%
Carbohydrates 43g14%
Fiber 10g42%
Protein 11g22%
* Percent Daily Values are based on a 2000 calorie diet.

How I served these beans: 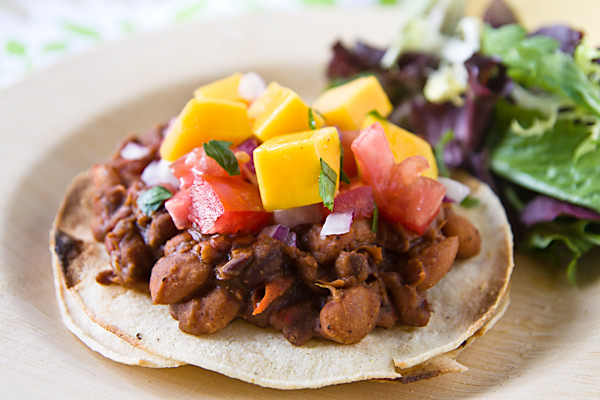 I used the beans as a part of my taco salad for lunch and as a filling for soft tacos and tostadas for dinner. A year ago you couldn’t have paid me to put fruit in a taco, but I’ve been doing it a lot lately, and mango (pictured above) was amazing in combination with these beans. I had planned to make it into a salsa but found that just dicing it and throwing it on the tostada with some tomatoes, red onion, and parsley was simpler and just as tasty.

Thanks to Gernot Katzer’s Spice Pages and The Epicenter for info about annatto.