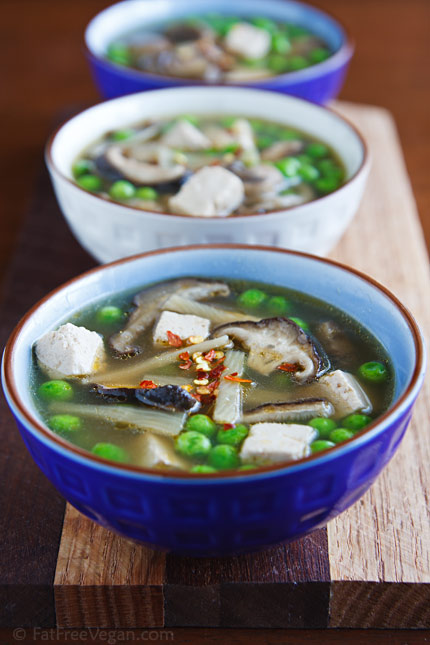 My poor slow cooker has spent most of its life gathering dust on a shelf, but lately it is getting a workout thanks to Kathy Hester’s new book, The Vegan Slow Cooker. With easy recipes, a clean layout, and lovely photos, it’s enticed even a last-minute cook like me to think ahead a little and get my crock pot going in the morning so that when dinnertime comes the meal is already done. Fortunately, Kathy’s publisher sent me two copies of her book, so I have one to share with a lucky reader–maybe you! [Update: A winner has been drawn. Thank you to all who entered. See the end of the post for details.]

When you open The Vegan Slow Cooker, the first thing you’ll notice is the layout: each recipe has its own page (no turning back and forth between ingredients and instructions) with ingredients on the left and instructions on the right. Kathy breaks the instructions down into two parts, what to do the night before and what to do in the morning, so that the recipes come together quickly in the morning when you’re likely to have less time. And if you’re a visual person, you’ll be happy to know that there are large, professionally shot photos of about 40 of the 150 recipes. Most recipes are easy and call for ingredients that are not hard to find in supermarkets.

Many of the recipes do use seitan and soy, but Kathy offers substitutes and includes recipes for making your own seitan (“Chick’n” and “Beefy”) as well as a gluten-free apple sage sausage, homemade ketchup, and low-sodium “chickeny” bouillon. Soy-free and gluten-free recipes are marked with symbols, and asterisks indicate substitutes for soy and gluten.

Though many of the recipes contain a little olive oil or vegan margarine, there are several recipes that are fat-free as written, including Creamy Butternut Squash Risotto, Caribbean Mango Black Beans, and Chile-Chocolate Black Bean Brownies (includes walnuts). Most of the oil that is used is easily removed by sauteing with water or broth, though the recipes that include vegan cheese may be a little harder to adapt for low-fat dieters.

You can get a taste of Kathy’s recipes for yourself at her blog, Healthy Slow Cooking. She has also contributed several to the main Fatfree Vegan Recipes site, where they’ve become some of the most popular recipes. You can see them all on this page. 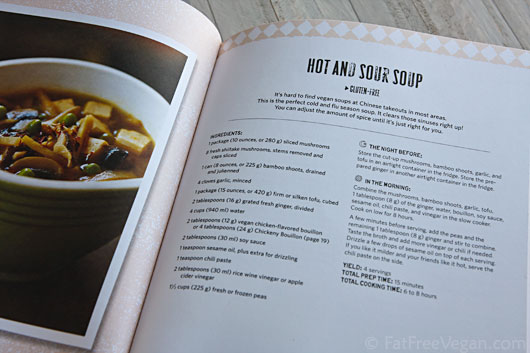 I had a hard time deciding which recipe to test from the book–both the Pumpkin Lasagna and the Caribbean Mango Black Beans had me intrigued–but the decision was taken out of my hands when my husband saw the Hot and Sour Soup recipe. It’s a soup he’s been craving ever since he became vegetarian, and I just haven’t found a recipe he really likes.

Kathy’s version, however, was a huge success. Though it wasn’t exactly what he remembered, it was so flavorful due to the long-cooking of the mushrooms in garlic and ginger-flavored broth–we both loved it.

Though the recipe says that it makes 4 servings, they are very big servings, and since we were eating it as part of a meal that included stir-fried vegetables and rice, we actually enjoyed leftovers for two more meals. I didn’t think the 1 teaspoon of chile sauce (I used Sambal Oelek) would be very spicy, but it turned out too hot for E, so spicy-haters beware and use a little less. With the chile sauce on the side, this soup will be a regular in our house. 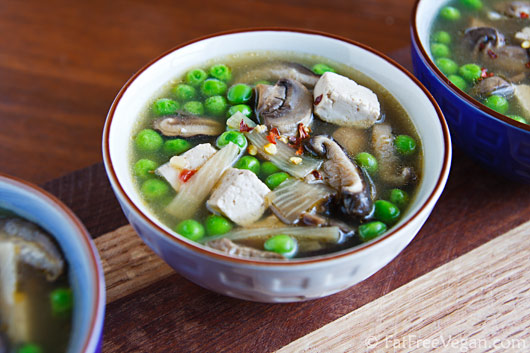 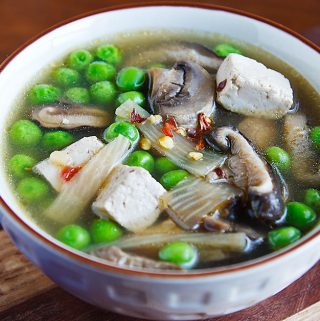 from The Vegan Slow Cooker by Kathy Hester Kathy's note: It's hard to find vegan soups at Chinese takeouts in most areas. This is the perfect cold and flu season soup. It clears those sinuses right up! You can adjust the amount of spice until it's just right for you.
Prep Time 15 minutes
Cook Time 8 hours
Total Time 8 hours 15 minutes
Servings 4
Author Susan Voisin