Inspired by falafel, these chickpea burgers are much healthier since they forgo the deep-frying typical of this Middle Eastern staple. 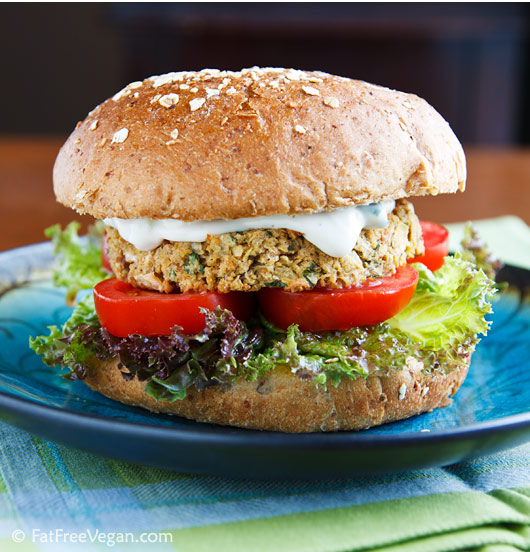 I was a vegetarian for six years before I became a vegan, and before I made the change, I thought that being vegan was just more than I was able to do. I had been inspired by Diet for a New America when I first became vegetarian, and though I agreed with the ethics of veganism, I made excuses for years before I decided to give it a real try. Finally, I made a deal with myself to eat a vegan diet for a month just to see if I could do it. I stocked up on soymilk, only available in the “big city” 60 miles away, and cooked all of my meals at home because there were no vegan-friendly restaurants in my small town.

At the end of the month, I had lost weight and I felt better than I had in years. Unfortunately (or perhaps fortunately, as it turns out) I decided to celebrate making it through the month by ordering a veggie pizza with cheese. My stomach revolted. Cramps, frequent dashes to the bathroom, and an embarrassing churning in my gut spoke to me in a way my month of good health had not, and I realized, finally, that my body was better off on a vegan diet. I made the change and never looked back.

If Colleen Patrick-Goudreau‘s new book, The 30-Day Vegan Challenge, had been around in the early 1990’s, maybe it wouldn’t have taken me so long to give veganism a chance, and maybe I would have been equipped with enough delicious recipes that I wouldn’t have wanted to “reward” myself with that pizza. Colleen believes that many people give up on veganism because that same perception that I had–that it’s too hard–holds them back. But with the right support, information, and guidance, they’d find that changing their diet is not as difficult as they feared. The 30-Day Vegan Challenge provides that support, answering every question a new vegan is likely to have and addressing every possible challenge, from how to eat when traveling to how to deal with social situations.

Because The 30-Day Vegan Challenge is meant to be a guidebook for future vegans, the recipes are easy and are perfect for those who are new to vegan cooking. Colleen hand-picked favorites from her previous cookbooks, and they include everything from scrambled tofu (and a great primer on how to use the different types of tofu) to chocolate mousse. Most recipes do use some oil, but Colleen points out that you can reduce it by sauteing in water instead.

The photographs are gorgeously shot and styled, and if you were in any doubt as to the deliciousness of vegan cooking, you will be convinced by the beauty of the photos alone. The book is divided into 30 days’ worth of subjects so that you can read each one as you go or jump ahead to to a chapter like “Celebrating the Holidays” or “Packing Lunches for School and Work” as you need it. 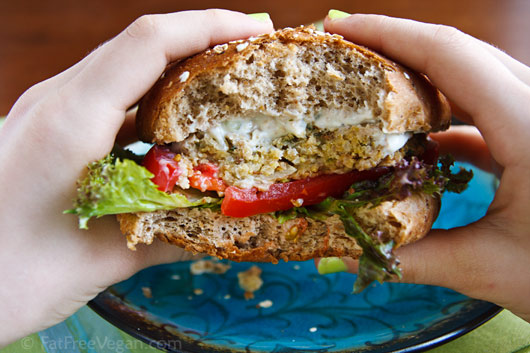 I chose to make Colleen’s Chickpea Burgers with Tahini Sauce for our weekend “Sandwich Night,” and they were a big hit. My husband and daughter enjoyed the burgers on hamburger buns while I ate mine in pita bread. They were very flavorful and the tahini sauce gave them a great tang. If you’re gluten-free, try replacing the bread crumbs with gluten-free crumbs, oatmeal, or quinoa flakes. 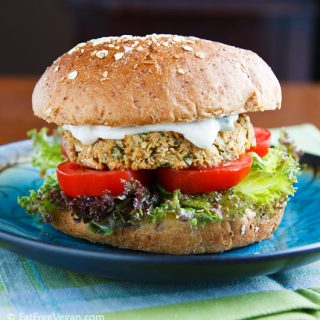 Susan's note: If your chickpeas seem too dry to form a paste, try adding water by the tablespoon until they become more "sticky." If your burgers still don't hold together, try pulsing the mixture a few times in the food processor. Nutritional info is for one burger only, no bun or sauce. Each counts as 2 points on Weight Watchers Freestyle program. Copyright © Colleen Patrick-Goudreau, The 30-Day Vegan Challenge, Ballantine Books, 2011. Reproduced by permission.
Nutrition Facts
Colleen's Chickpea Burgers with Tahini Sauce
Amount Per Serving (1 burger)
Calories 101 Calories from Fat 24
% Daily Value*
Fat 2.7g4%
Sodium 385mg17%
Carbohydrates 16.5g6%
Fiber 3g13%
Protein 3.7g7%
* Percent Daily Values are based on a 2000 calorie diet.

Colleen’s tahini sauce is lighter than most because it’s based on non-dairy yogurt. Be sure to use plain, unsweetened yogurt for best results. 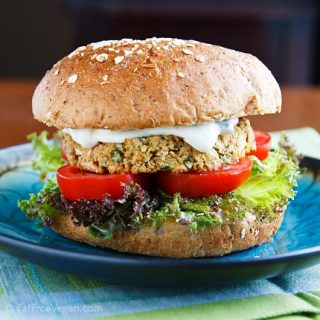 If you’re not in the mood for chickpea burgers, try one of my favorite burgers below. You can also find all of my burger recipes here.

It’s been fun reviewing vegan books for the past three weeks, but I’m ready to get back to creating my own recipes. I’ll be back soon with a new one! 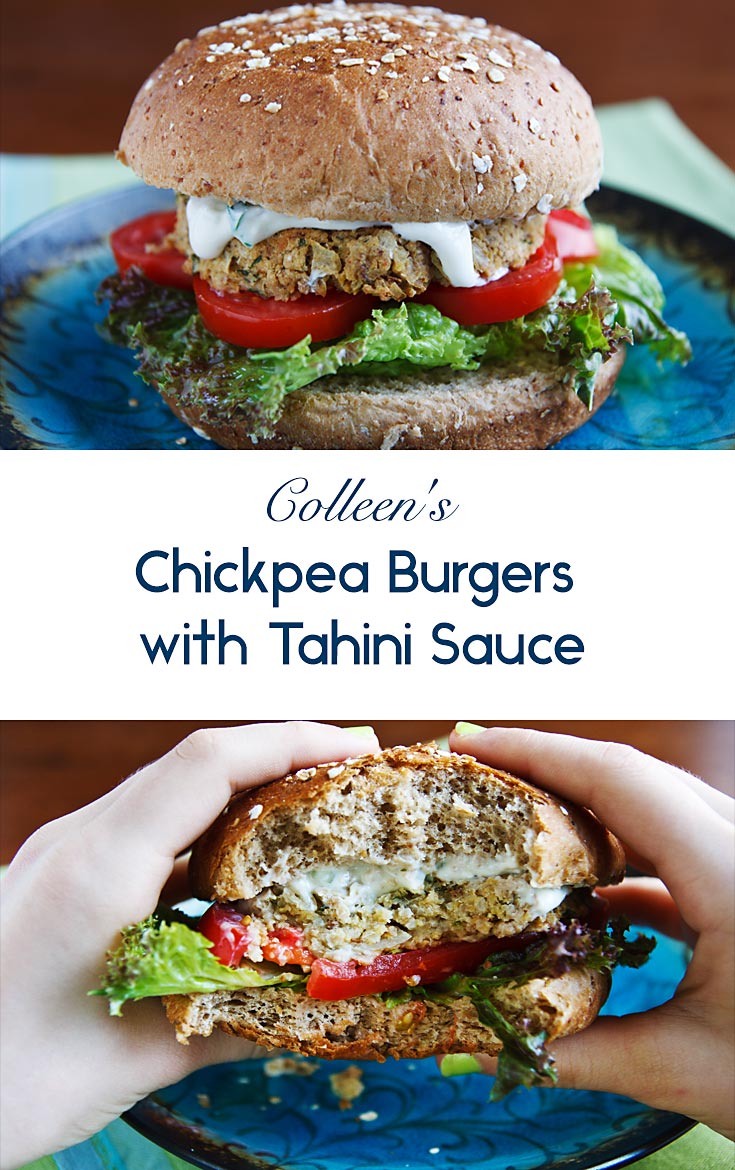