This easy curry dish is like a vegan palak paneer, with chickpeas instead of paneer and kale instead of spinach. It’s a delicious and quick meal for two. 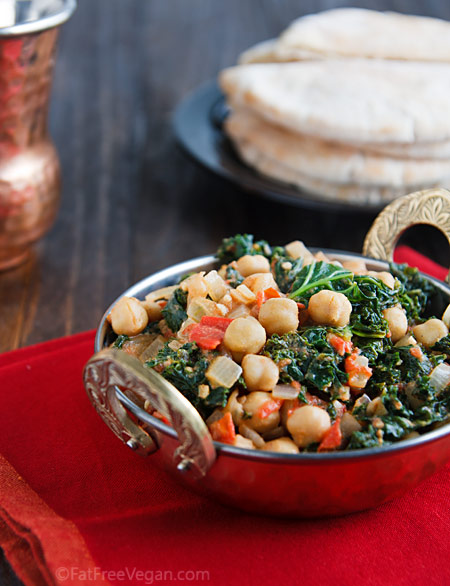 There’s nothing like being left alone for the weekend to make someone who “loves to cook” lose all desire to operate a stove. My husband and daughter ran off to New Orleans this past weekend, and though you’d think I would seize the opportunity to cook dishes that I like that they don’t, the ugly reality is that my diet deteriorated into sandwiches and reheated leftovers.

Cooking without someone to cook for just isn’t my thing; besides, with my clean-up crew away on vacation, I knew that anything I cooked I’d also have to clean up. But after a couple of days of sandwiches, I was ready for real food again, as long as I didn’t have to work too hard for it.

And so I took a half-bunch of kale that needed to be used, combined it with a fresh tomato and a cup of chickpeas, and came up with this relative of palak paneer, with kale instead of the spinach and chickpeas standing in for the cheese. Since I was all alone, I made only a little, enough for one or two servings, and because I didn’t have any rice cooked, I packed it into toasted pita bread. I added seasonings to taste and had absolutely no intention of sharing the recipe–until I tasted it.

It was so good that I quickly spooned it into a fancy bowl I’d bought at the local Indian restaurant and snapped a couple of photos before devouring it. It’s super-easy and a great meal if you’re cooking for one or two, though feel free to double or triple it if you’re lucky enough to be cooking for a crowd. 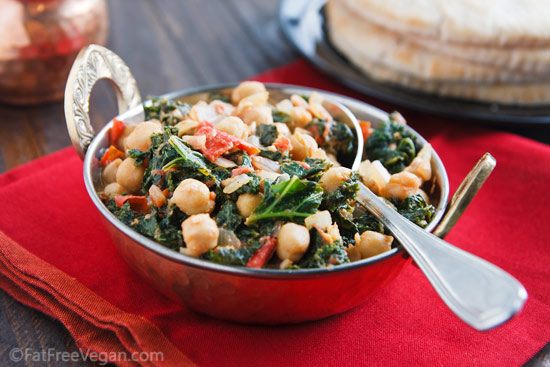 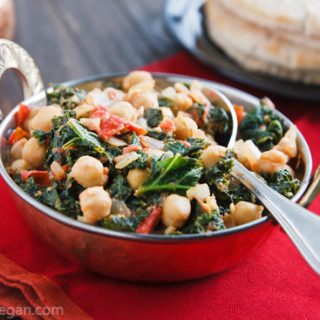 Tahini is not a traditional ingredient in Indian dishes, but here it adds a richness normally provided by cream. If you’re avoiding all added fat, you can leave it out.
Prep Time 10 minutes
Cook Time 22 minutes
Total Time 32 minutes
Servings 2
Author Susan Voisin

You can use spinach or another green instead of kale, but measure it by weight, not cups. If you would like a smoother texture, process the kale/tomato/onion mixture briefly in the food processor after step 2. Return it to the pan before adding the chickpeas and continuing the recipe.
Nutrition Facts
Curried Chickpeas and Kale
Amount Per Serving (1 serving)
Calories 236 Calories from Fat 48
% Daily Value*
Fat 5.3g8%
Sodium 150.8mg7%
Carbohydrates 39.4g13%
Fiber 9.8g41%
Sugar 8.4g9%
Protein 11.7g23%
* Percent Daily Values are based on a 2000 calorie diet.