This vegan bread pudding is full of the aromatic flavors of cinnamon, ginger, and cloves, combined with the rich, amber taste of maple syrup. 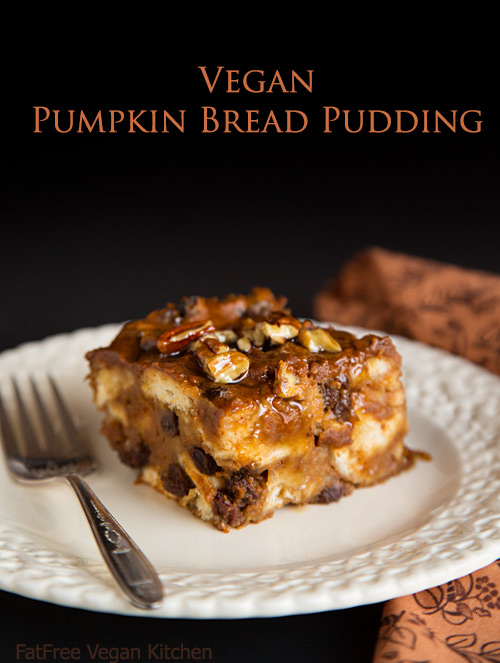 Well, it’s that time of year again, the time when I throw all caution to the wind and offer you something a little richer, a little more decadent, a little more sinfully delicious than my usual fare. I consider Thanksgiving to be a time to relax and enjoy cooking for and eating with family and friends.

And because I’m often put into the position of feeling like a “vegan ambassador”–someone whose job it is to spread the glory of veganism to everyone she meets–I try to come up with something that everybody will enjoy, not just those of us who are used to following a low-fat, low-sugar whole foods diet.

That’s why some of my holiday recipes, such as Double-Layer Pumpkin Cheesecake or Vegan Green Bean Casserole, contain ingredients I wouldn’t normally use. I don’t advocate eating these delicious dishes every day, but I think they can be very special as a part of a celebration and feast once a year.

For this year’s holiday extravagance, I decided to commit culinary heresy and take my husband D’s signature dessert, the New Orlean’s style bread pudding he learned to make years ago, and give it a fat-free makeover. It was a huge challenge. The original recipe for just the sauce contained a stick of butter, a cup of sugar, and a cup of rum. D, of course, had veganized it with margarine and cut down the amount, but it’s still one of the richest desserts ever to come out of my kitchen. And it’s the dessert that my daughter now asks for on her birthday. So I knew I had better do it justice, but I decided to go a step further and make it…unrecognizable. 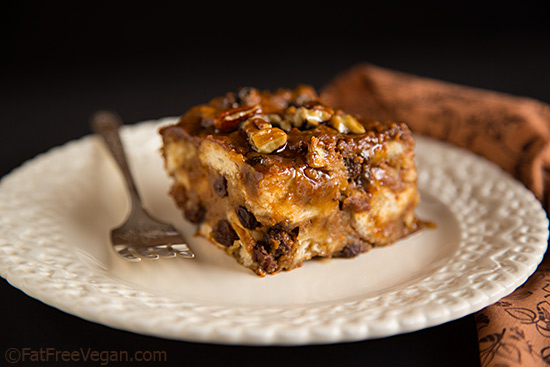 The original was, essentially, French bread soaked in sugar, margarine, and alcohol. I decided to replace the margarine with pumpkin and pumpkin spices, replace the 3 cups of sugar with a lot less maple syrup and just a tad of organic dark brown sugar, and reduce the alcohol to just a taste. I held my breath as my family members sampled it and gave their verdicts: “It’s different but delicious.” And then they proceeded to eat it all up!

If you like pumpkin pie and bread pudding, I think you’ll love this combination. It’s full of the aromatic flavors of cinnamon, ginger, and cloves, combined with the rich, amber taste of maple syrup. It’s just sweet enough without being too sweet, just decadent enough without being loaded with fat. You can serve it to your family and not feel guilty when they eat the entire pan. 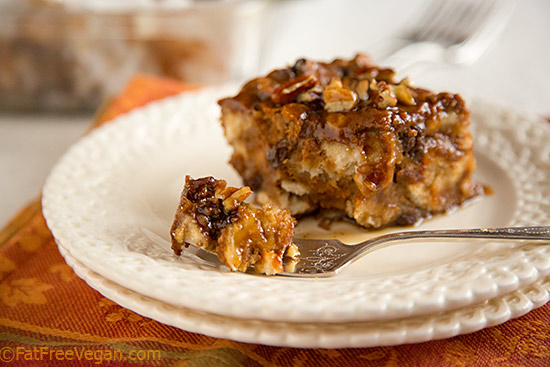 I know someone is going to ask about making this gluten-free, but I just don’t know. The French bread I used was quite sturdy and dense, and it’s the gluten in the bread that keeps it from dissolving into mush. I fear that gluten-free bread might not work, but since I don’t have any experience with gluten-free bread, I can’t say for sure. It could be that breaking down into mush isn’t such a bad thing in a bread pudding, so I will let my gluten-free readers experiment with this and report back.

If you’re planning your holiday meal, start right here with my collection of Thanksgiving recipes. 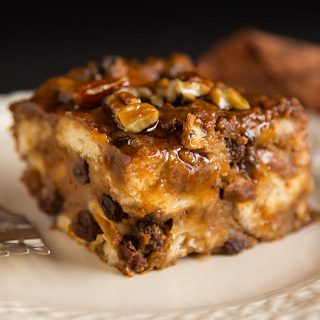 Use the crispiest French bread you can find or try substituting a whole-grain baguette. Make sure that the bread you use weighs 16 ounces--you may need more than one loaf if your bread is airy. The sauce really adds a lot of "New Orleans flavor" to this dessert, but if you can't use alcohol, just leave it out.
Prep Time 20 minutes
Cook Time 1 hour
Total Time 1 hour 20 minutes
Servings 8
Author Susan Voisin

If you're trying to cut down on sugar, try replacing the maple syrup in the pudding with 1/4 cup non-dairy milk mixed with a little stevia. You'll save about 20 calories. Leaving out the nuts will reduce it another 20 calories and 2 grams of fat.
Nutrition Facts
Vegan Pumpkin Bread Pudding
Amount Per Serving (1 serving)
Calories 315 Calories from Fat 36
% Daily Value*
Fat 4g6%
Sodium 405mg18%
Carbohydrates 61g20%
Fiber 3.6g15%
Sugar 24.6g27%
Protein 8.3g17%
* Percent Daily Values are based on a 2000 calorie diet.