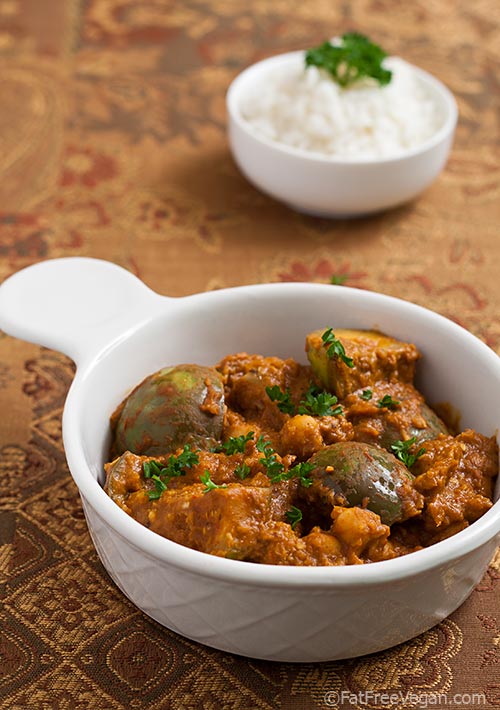 Whenever I’m in New Orleans, there’s one thing I have to do. Is it visit the French Quarter? Eat a vegan Muffaletta? Catch a jazz performance? No, though those are all high on my “love to do” list, the one thing I have to do is visit the Hong Kong Market. It’s a huge Asian supermarket, probably bigger than all the Asian markets in Mississippi combined, and it’s the only place where I can find produce like purple yams, long bok choy, and Thai eggplants. I always bring an empty ice chest just for transporting these delicacies back home.

Since I first tried Thai Eggplants, I’ve been wanting to go back for more. And though this batch wasn’t quite as fresh as the last, I was still happy to get them. I’d hoped to be able to pick up some small purple eggplants and long Japanese ones, but they were all in very bad shape. So I consider myself lucky to have found these at all. 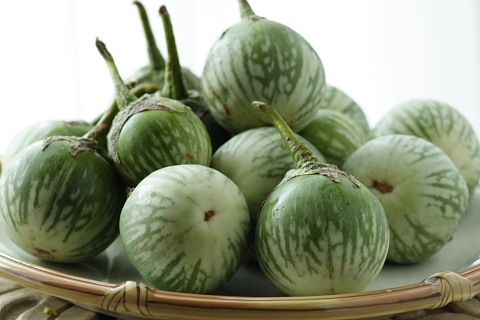 Once I got them home I decided to ignore the fact that they are Thai eggplants and treat them like Indian ones. This recipe is sort of a shortcut version of Bagara Baingan, perhaps my favorite Indian eggplant dish. It’s traditional to roast and grind your own peanuts for Bagara Baingan, but I took the easy way out and used peanut butter.

I also didn’t stuff my tiny eggplants with the masala paste; instead, I cut them into quarters and simmered them in the rich peanut-sesame-coconut sauce until they were tender. I threw in a handful of chickpeas just to add a little protein and served it over rice. What can I say? This is one of those times when words fail and I wish computers had “Taste-O-Vision.” If you like Indian food, put this on your “Must Try” list! Note: if you don’t have Thai eggplants, any old eggplant will do. 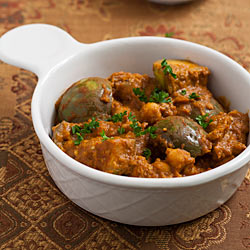 Don’t be intimidated by the long list of ingredients; most of them are thrown together into the food processor and ground to a paste. This dish comes together remarkably easily, and if your eggplants are young and tender, it cooks quickly. Note that if you don’t have Thai eggplants, any eggplant will do.
Prep Time 15 minutes
Cook Time 30 minutes
Total Time 45 minutes
Servings 4
Author Susan Voisin

Nutritional info does not include salt. Note that because of the peanut butter, this is a higher-fat recipe.
Nutrition Facts
Thai Eggplants and Chickpeas in Peanut Masala
Amount Per Serving (1 serving)
Calories 219 Calories from Fat 72
% Daily Value*
Fat 8g12%
Sodium 25mg1%
Carbohydrates 33g11%
Fiber 7g29%
Protein 9g18%
* Percent Daily Values are based on a 2000 calorie diet.