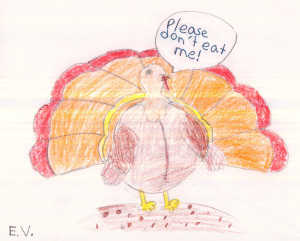 I make no secret of the fact that I don’t really like Thanksgiving. I’ve tried my best to see it as a time to get together with family without all the commercialization of Christmas, but all the emphasis on food just annoys me. It’s probably not surprising that as a vegan I bristle at the whole notion of a holiday focused on killing and eating a big bird, but actually I rejected Thanksgiving long before I became vegetarian. As a child, I’d complain to my mother every year, “Why do we have to have turkey? Why can’t we have spaghetti for a change?” It had less to do with my compassion for turkeys and more to do with my inherent rebelliousness. I just didn’t like being told that I had to eat certain foods on certain days. Traditions make me cranky. Call me Scrooge, or whatever the Thanksgiving equivalent is.

So it’s really out of character for me to have been thinking about the Thanksgiving meal for the last couple of weeks. I blame it on this blog–and reading other food blogs–but recently I’ve been trying out recipes with half an eye toward how they would fit into a Thanksgiving dinner. As I’m serving them, I don’t announce that they’re potential T-day recipes, but the aroma of certain seasonings–thyme, sage, rosemary–conjures up the holiday as effectively as those little paper pilgrim hats we used to make in grade school.

During this period of trial and error, I’ve managed to come up with three recipes that could be considered worthy of serving at The Big Feast. I’m going to give you two of them now. The third, and best, Double-Layer Pumpkin Cheesecake, will have to wait until I’ve had a chance to take photos of it later today.

First up: Quinoa and Red Lentil Cutlets. I think all the croquette recipes really got to me because when I made these, I consciously stole from two of them. The quinoa and red lentils are straight out of Kristine’s Thai Lentil Croquettes, and the seasonings and use of gravy were inspired by Sheree’s Southern Blackeyed Pea Croquettes. And the name “cutlets”–you know I stole that from Veganomicon’s Chickpea Cutlets. (I only steal from the best.) 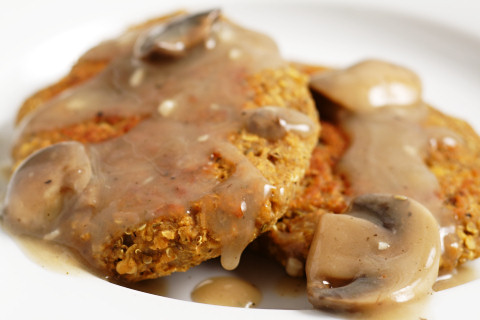 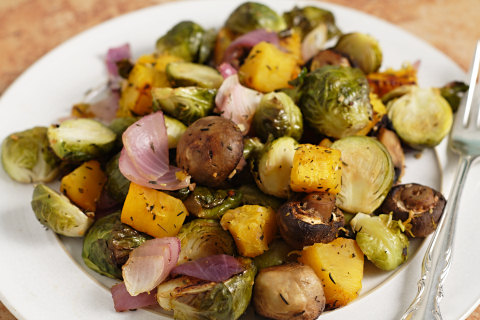 This is a non-recipe, but it’s what my husband really wants for Thanksgiving dinner. You can do this with any vegetables, just be aware of their relative cooking times and add them to the oven at the appropriate times.

I started with a small pie pumpkin, which I cut into slices, peeled, and then cut into 1-inch cubes. Any winter squash will work instead (I prefer butternut for its delicate taste and easiness to peel). Put the pumpkin cubes into an oiled baking dish, sprinkle them with seasonings (I used thyme and rosemary) and lightly mist with olive or canola oil. Put into a hot oven (about 425F) and roast for 15 minutes. Stir and return to the oven.

After stirring, you can add your quicker-cooking vegetables. I used halved brussels sprouts, but I put them into a separate baking dish because they were still wet from being washed. Do not add wet vegetables to a hot pyrex baking dish or you risk breaking it. I let them cook for about 10 minutes and then added a package of mushrooms, half a diced red onion, a few cloves of minced garlic, and some more seasonings. I cooked them until the mushrooms were tender and juicy. Then I removed all the vegetables from the oven, poured them into a big bowl, and seasoned them with salt, pepper, and a little balsamic vinegar.

Those were just the vegetables I had in the house, but you can roast any vegetables you want. Some, like okra, cauliflower, broccoli, and brussels sprouts, take longer to cook; others, such as green pepper, mushrooms, onion, zucchini, yellow summer squash, tomatoes, and eggplant, take less time. Put them in the oven in stages, starting with the starchy vegetables, such as winter squash and potatoes, and ending with the mushrooms and summer squash. Season to taste and enjoy.

Get ready for holiday decadence in my next post!