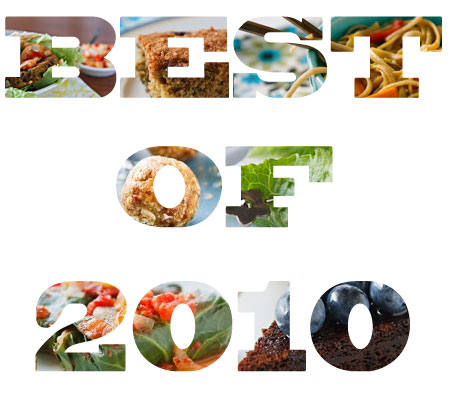 I don’t usually write “best of the year” posts. The one time I tried, I divided the year into two posts and never got around to writing the second half! That was for 2006, the first year of this blog, when I was posting almost every day. In 2010, I adopted a much slower pace, choosing to post only those recipes that were very good–and to keep my sanity. With so many fewer recipes to choose from, I thought it would be easy to go back and pick my top 10, but somehow 10 turned into 14. Here they are, in roughly chronological order: 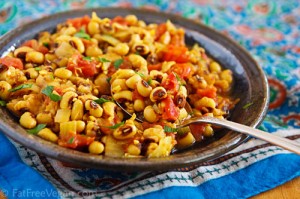 Black-eyed Pea Masala : 2010 was the year my daughter E started to love Indian food. I’ll never forget her “testing” this dish as I was cooking it–and then coming back for more and more samples. It was a delicious start to the new year. 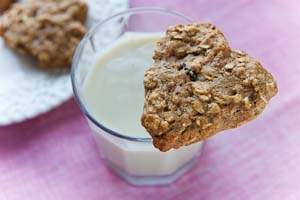 Banana-Maple Oatmeal Cookies: Despite containing no white flour or sugar, these banana-powered cookies were one of the most popular recipes on the blog this year. They’re more cake-like than cookies made with margarine but are also very filling so you won’t be as tempted to overeat. 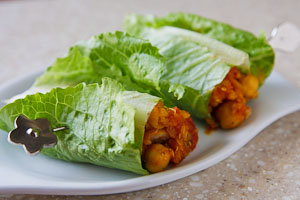 Ridiculously Easy Curried Chickpeas and Quinoa: Many of my readers love “ridiculously easy” recipes as much as I do, and they don’t come much easier than this dish, which you can use as a filling for bread or for lettuce leaves. 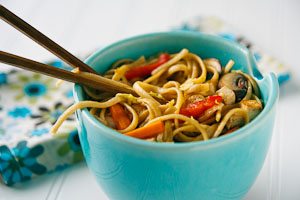 Baked Spring Rolls and Low-Fat Lo Mein: Despite having difficulty rolling the spring rolls in my too-old, dried out wrappers, I managed to pull off two good dishes, thanks to the encouragement of my family, who devoured them both in record time. 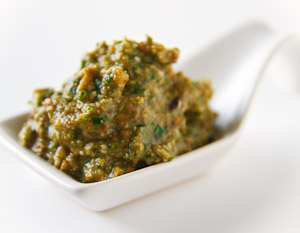 Roasted Eggplant Pesto: This immediately became my favorite oil-free pesto. Though not the most attractive oil-alternative, roasted eggplant contributes a hint of smoky flavor without overwhelming the other ingredients and makes a sauce whose consistency is more like traditional pesto than any of my other versions. 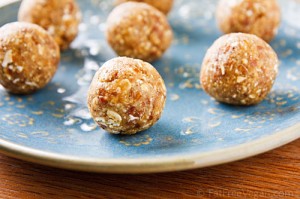 Banana-Cashew Balls: Inspiration hit me and I decided to dry bananas in my microwave, and their chewy consistency and concentration of banana flavor transformed these snacks into little bites of bliss. 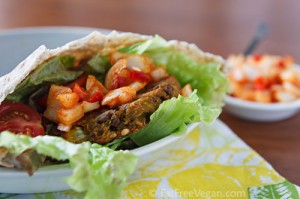 Curried Eggplant, Lentil, and Quinoa Burgers with Onion-Pepper Relish: Of all the recipes I created this year, these unique burgers are probably my favorite. The roasted eggplant adds flavor and texture, but the burgers don’t actually taste like eggplant, so they’re safe to feed to any eggplant haters in your family. 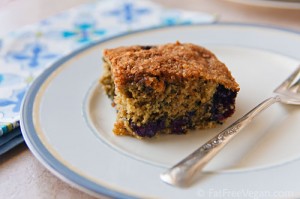 Blueberry Breakfast Cake: I love breakfast cakes. They’re easier to make than muffins–and much easier to clean up afterward (none of those pesky little silicone muffin cups). If you have blueberries in your freezer, you can enjoy this summery cake any time of year. 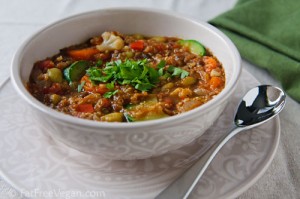 Ridiculously Easy Lentil and Vegetable Stew: Canned pumpkin adds richness and a hint of flavor to this Spanish-influenced stew. And it’s ridiculously easy–need I say more? 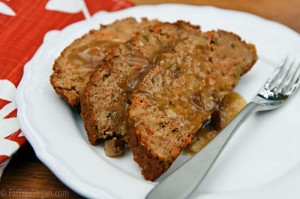 Thanksgiving Meatless Loaf: I need to do more loaves! I was amazed at how quickly this became one of the most popular recipes on my blog, an honor that’s well-deserved. Usually by the end of the year I’m tired of Thanksgivingish food, but just looking at the photo makes me crave this herb-filled, savory loaf. 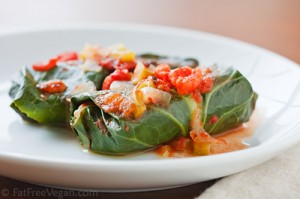 Collards Stuffed with Red Beans and Rice: These collard rolls were a big hit with my husband and me, but they’re a little too complicated to make often. They’d be an impressive entree on any Mardi Gras party menu. 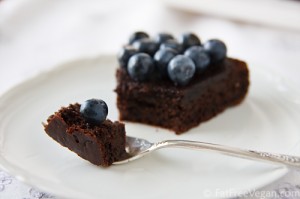 Chocolate-Blueberry Cake: The other hugely popular recipe from 2010, this dense, brownie-like cake was tasty but not as moist or tender as my other chocolate cakes. Chocolate-Orange Cake remains my favorite. 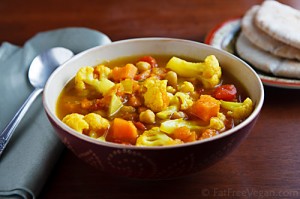 Curried Cauliflower and Sweet Potato Soup: Can you have too much curry? I think not, but since I already had two curry dishes in my top ten (three if you count the black-eyed pea masala), I decided to give this soup honorable mention, but with a hearty recommendation that you give it a try. 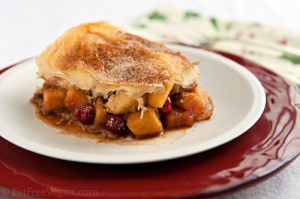 Apple-Cranberry Strudel Pie: Working with phyllo dough scares some people, so I tried to make it easier with step-by-step photos and a diagram of the layers of this pie. I may have made it seem more complicated than it is because, trust me, you can make this light and delicious dessert!

So those are my favorites. What were yours?

Feel free to leave a link to your favorite recipe of 2010. Bonus points if it’s on this blog! 😉