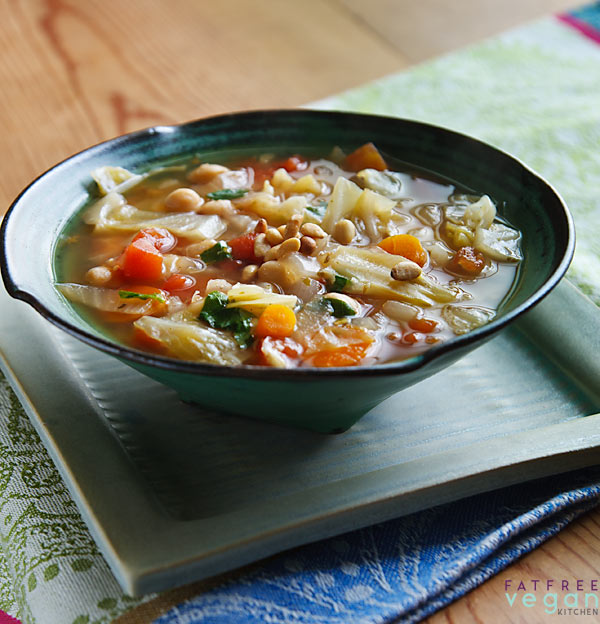 The day after her 14th birthday, my daughter E leaned against the door to my office and said, “Let’s go on a diet together.”

I was stunned into babbling: “You do not need to go on a diet. You’re a size 0. If you get any smaller, you’ll cease to exist.”

“I know. I don’t want to lose any weight. But it would be fun to do it together.”

I knew where this was coming from. Earlier that day she’d had lunch with a friend and her friend’s “awesome mom” who were doing a low-carb diet together.  She’d watched as her vegetarian friend put all the cheese and vegetables of her sandwich onto one piece of bread and ate it open-faced. She’d told me about the lunch in detail, and I could tell that there was something about the relationship between the mother and daughter that appealed to her, something that she wanted to share with me. And though the idea of her starting down this whole diet path at her age scared me to death, I said, “How about a cabbage soup diet?”  I never dreamed she’d say yes, but she did.

Notice I said “a” cabbage soup diet and not “the” cabbage soup diet, whatever that is. Our plan was simply to eat cabbage soup once a day for a week and not to restrict ourselves in any way. I figured it would be a way to get more vegetables into her “sandwich for lunch” diet. It had been years since she’d allowed me to pack soup in her lunchbox, but now she was asking me to, even offering to eat it for breakfast.  More importantly, it would give me a chance to show her that a person’s “diet” isn’t about weight loss but about healthy eating. If I’d seen any sign that she was actually wanting to lose weight, any sign of body image issues, I would have backed off of the idea and sat her down for a long talk. But she just wanted to get into the kitchen to make our soup together. 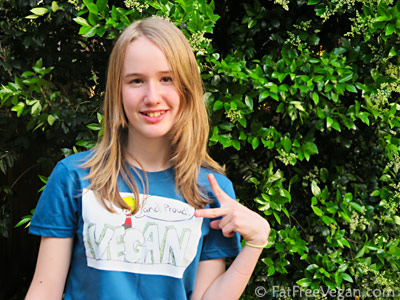 E on her 14th birthday; shirt by Vegan Beast

I decided right away that our vegan cabbage soup would contain beans for protein, tomatoes for lycopene, and a little extra fat, in the form of pine nuts. E sauteed the onions and other vegetables while I did all the chopping, and we decided together that some of the basil from our garden would be the best seasoning for our “pesto soup,” as E called it.

Like everything else E has had a hand in making, she loved this soup.  She ate two bowls of it for lunch on Sunday, the first day of our “diet,” and took it to school for lunch on Monday, along with some whole-grain crackers, a granola bar, and an apple–a nourishing meal for a teenager.

I’m still not sure I did the right thing in allowing a 14-year old to go on a diet, even one without restrictions. But I figure in our body-conscious society, more and more of her friends are going to be talking about dieting, and I might as well show her from the start that it’s all about adding healthy fruits and vegetables, not taking dangerous pills or drinking meals out of cans.

Update: We had this soup for lunch on Sunday and Monday, and for Tuesday I made a potato-cabbage soup that was, in E’s words, an epic fail. We both ate it anyway, but there was no way we were choking it down again on Wednesday, so we went soupless. I’m making another pot of this cabbage soup today, since it was such a success, and we’ll have some for a snack this afternoon. 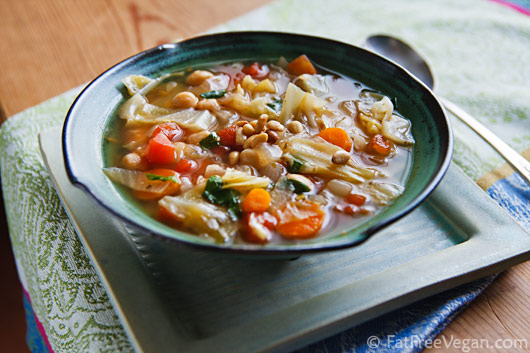 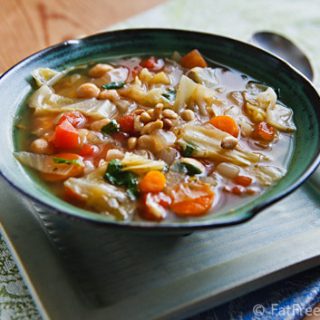