I had a problem coming up with a name for this salad. Though technically accurate, “Spicy Grapefruit Coleslaw” sounds a little bizarre. Plus, since the grapefruit and the spicy wasabi paste are both optional ingredients, you could make this and come up with a coleslaw that is neither spicy nor grapefruity, but personally I think you’d be missing out on a unique but wonderful taste.

I really love coleslaw, and I’m not a stickler for one type of dressing or another. When I’m in a creamy dressing kind of mood, I’ll make coleslaw with Bryanna’s poppyseed dressing or my mayo-based herb dressing; when I want something lighter, I turn to Asian-inspired vinaigrettes like Sesame-Orange Coleslaw or the coconut-ginger dressing I’ve used on broccoli slaw. This coleslaw falls into the latter category, but it’s a much simpler version, suitable for tossing together at the last minute for a light lunch. 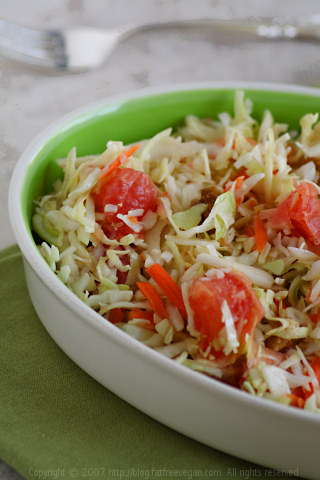 I note that the grapefruit is optional because my husband prefers his without it (he’s not a grapefruit fan). You could also substitute orange or tangerine sections for grapefruit–or use any other fruit that sounds appetizing (I was very close to adding raspberries!) Omit the wasabi if you don’t like the hint of spiciness it gives or just use a little less (or more for you hot-lovers).

There is a completely outrageous attack on veganism in today’s New York Times, and though I hate to post a link to it, I think it’s important that vegans see it and let the NYT know how completely devoid of fact that it is. The editorial, by anti-vegetarian propagandist Nina Planck, is here.

Eric Marcus is organizing a letter write-in, and you can listen to his podcast today for details:

As a woman who was vegan before, during, and after her pregnancy and who raised an extremely healthy daughter on a vegan diet, I am appalled at the misinformation in this editorial. That it is presented in such a respected newspaper is going to lend credence to a lot of its ridiculous statements. Even if you don’t write a letter, it’s important to know what it says in order to be ready when people challenge your veganism. For the (real) facts about children and veganism, check out Jack Norris’ Pregnancy, Infants, and Children and the ADA’s position paper on vegetarian diets.

When I get angry, I tend to sputter and swear a lot, so I left it to others to take on the editorial in a more articulate fashion. Here are a few of the many great responses I’ve read to date.

Isa jumped in right away on her blog. And people began posting photos of their healthy vegan kids, too!

I knew we wouldn’t have to wait long for Dr. John McDougall’s Reply.

I have to admit that I mostly stopped reading Tigers and Strawberries after Barbara lauded Nina Planck’s book last year, but she has turned me back into a regular reader with this articulate rebuttal of the NY Times editorial.