Creole and Cajun food doesn’t have to be loaded with meat and fat to taste decadent. This vegan etoufee is stuffed with all the spicy flavors of Louisiana. 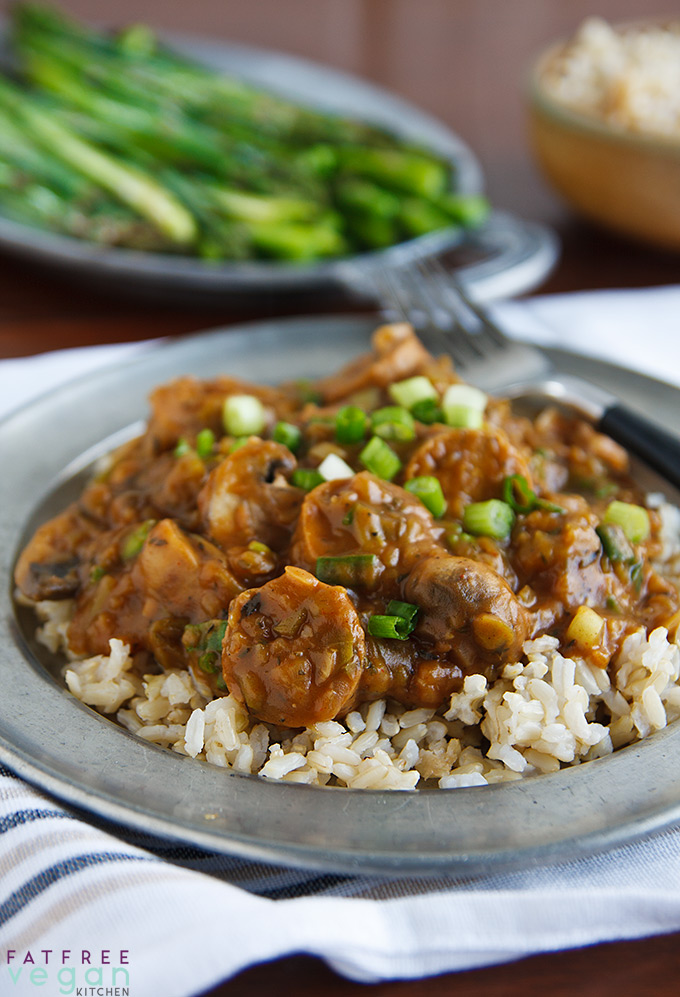 I’m writing this from a hotel on St. Charles Avenue after a night of revelry in the streets of New Orleans. If you’ve never been to Mardi Gras, you might assume that the partying is confined to Fat Tuesday itself, but Mardi Gras day is just the culmination of all the parties and parades that have been going on over the last couple of weeks.

Yesterday, out on the street for over twelve hours, my family and I were able to catch six parades (and a couple of bags of purple, green, and gold beads). Tonight we’ll be back out there for four more, and we’ll stay to see Zulu and Rex on Tuesday before we return to real life.

You would think that because we’re in New Orleans we’d get to sample a lot of great New Orleans-style food, but the truth is that, though N.O. has become more vegan-friendly over the last few years, there don’t seem to be many restaurants that offer meatless versions of gumbo, etoufee, or even red beans and rice. While we’re here, we’ll seek out great Vietnamese food or maybe Tapas, but we won’t be able to find Eggplant Creole. Last week, in anticipation of our trip, I began craving spicy New Orleans food, and since I knew I probably couldn’t get it here, I made it myself.

Étouffée is basically seafood (usually) or meat cooked in a thick gravy that begins with a roux, a mixture of flour and oil that is cooked until it turns a rich brown color. Then the Louisiana trinity is added–onions, celery, and green pepper–along with broth and herbs and lots of red, black, and white pepper to achieve a sauce so flavorful that you could probably cook an old non-leather wallet in it and have it come out delicious. Making a vegan etoufee is easy–just use vegetable broth and non-meat protein–but making a fat-free etoufee is a little more challenging because the roux that gives it the rich, smoky flavor requires fat. 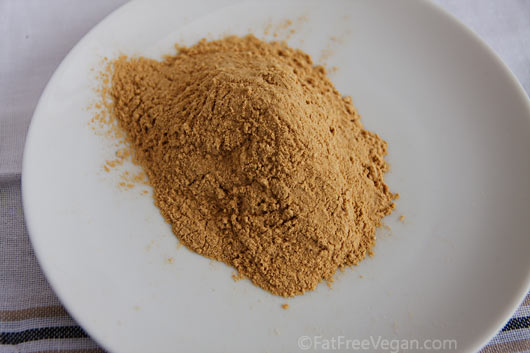 Or does it? As it turns out, you can make a great “dry roux” just by browning the flour alone in a dry skillet. Like any roux, you have to stir it nearly constantly and make sure it doesn’t burn, but once it’s browned and blended with vegetable broth, it forms a thick, flavorful gravy that I, at least, prefer to an oily traditional roux.

I don’t usually use a lot of fake meats, and when I do, I make them myself. But since Mardi Gras is all about excess, I went all out and used a processed vegan sausage for this etoufee, and I have to say, it was one of the best, most decadent-tasting dishes I’ve made in a long time. I hope you’ll give it a try for a little taste of Mardi with not so much of the Gras. 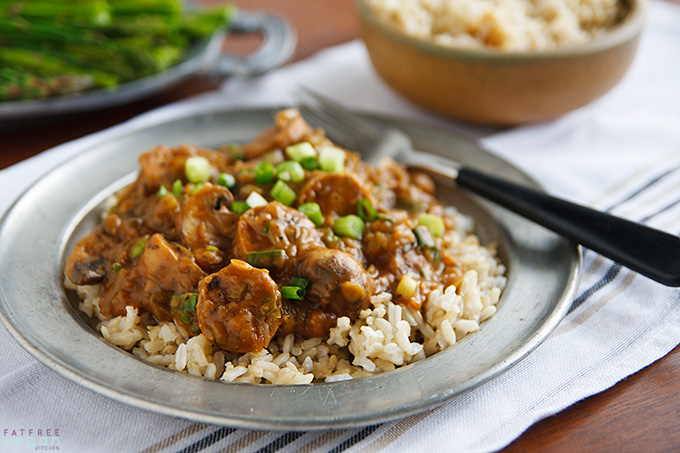 Gluten-Free Friends: Obviously, this recipe is not gluten-free as written, but I’ve heard that people have had good luck making a roux from Bob’s Red Mill Gluten-Free All Purpose Flour Blend. Just use it to replace the flour, and brown it the same way. As for the sausage, you could try replacing it with cubes of baked tofu or tempeh or use red beans. And don’t forget to substitute gluten-free tamari for the soy sauce or use salt instead.

If you’re looking for more vegan Mardi Gras dishes, check out all my Vegan Louisiana Recipes. 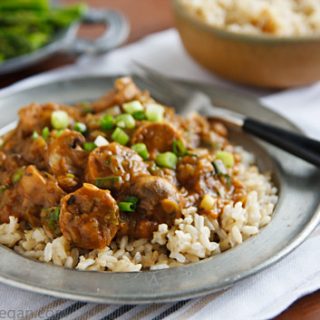 A quarter teaspoon each of the cayenne, white, and black pepper will probably provide enough heat for most people, but if you like your food fiery, add more to taste, but try to keep the amounts balanced. If you don’t like spicy dishes, start with 1/8 teaspoon of each pepper and build up from there.
Prep Time 15 minutes
Cook Time 45 minutes
Total Time 1 hour
Servings 4
Author Susan Voisin

Course Main Course
Cuisine Cajun, Louisiana, Vegan
Keyword seitan, vegan etoufee
Have you made this recipe?Mention @SusanFFVK and tag #fatfreevegankitchen in your photos on Instagram.
Share on Facebook Pin This Recipe Share by Email 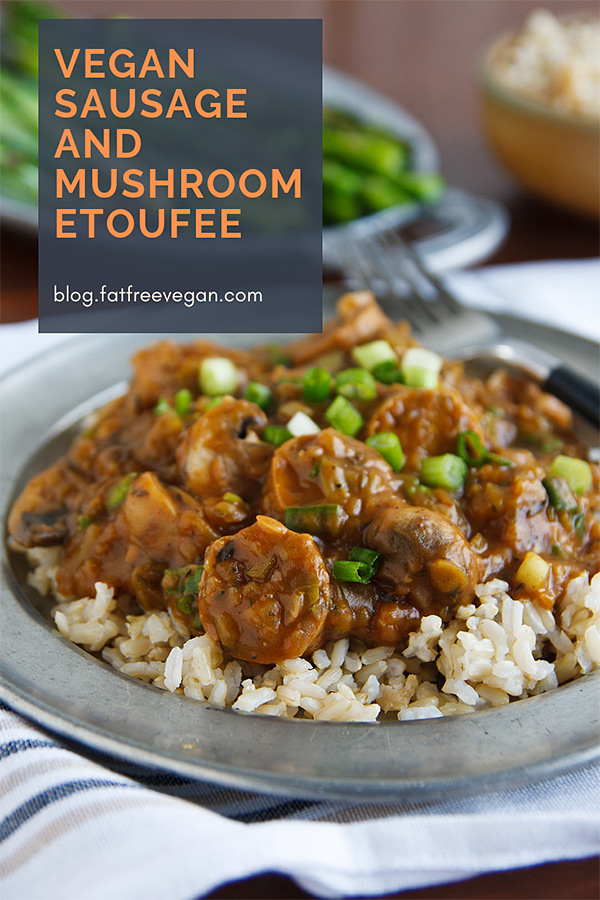