Take a break from ordinary vegan chicken soup with this Javanese-inspired meal-in-a-bowl with a broth richly spiced with ginger, garlic, and turmeric.

I haven’t properly been teaching my daughter to cook. Or at least that’s how I felt after reading an article in the New York Times about a mother who has her 10- and 14-year-old sons cook dinner on their own once a week. When I read the article a few weeks ago, my first, defensive thought was, “Impossible! E would cook lasagna every single week.” My second and more disturbing thought was, “Could I really relinquish control of the kitchen and trust that E wouldn’t burn down the house or sever an artery?”

The sad truth of the matter is that, other than teaching her the two easy dishes she makes for herself after school (baked potatoes and pasta and vegetables with basil and olive oil), I’ve done very little to prepare my almost 15-year-old to cook on her own.

I’ve always been a big proponent of letting kids help with the cooking, and I found early on that E would often be more eager to eat vegetables if she’d had a hand in making them. But as she’s gotten older and homework takes up more of her time, she just isn’t in the kitchen with me as much as she used to be. And frankly, because I’m constantly under pressure to create new dishes to blog about, I’ve never even considered handing over the cooking duties to either my husband or my daughter. Dinner every night is an opportunity for me to experiment and create, and though I often don’t experiment or create anything new, there’s still that possibility (our dinner is often late because I’ve waited until the last minute to cook, hoping inspiration will hit).

Still, I think it’s important that E get more experience in the kitchen. She was 8 when I started this blog, which feels like 10 minutes ago, so I’m sure that the next time I look up from my computer she’ll be off to college. (Time works like that when you have kids.) So I mentioned the idea to her a few weeks ago, and she was all for it.

We settled that Saturday would be her night to cook, but between trips out of town and a teenager’s active social life, we didn’t get a chance to do it until this Saturday, when E brought to my attention that it was her night to cook. Lasagna, of course. Oops. I’d totally forgotten about our arrangement, hadn’t bought lasagna noodles, and had bean sprouts that were going to go bad if I didn’t use them in the Indonesian soup I’d been planning. So we compromised. I made the soup while E made a favorite dish of hers, inari sushi. 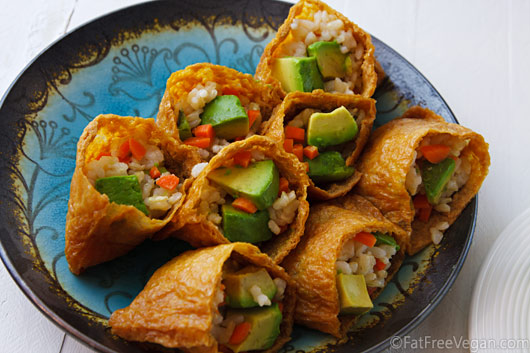 It took me about 30 seconds to explain to E how to prepare inari, which is something she always begs me to make but which I rarely do. Despite my qualms about their nutrition (I squeeze out as much of the oil- and sugar-laden marinade as possible), I keep a can of inari wrappers in the pantry precisely because E puts them into my shopping cart whenever she sees them at the Asian market. I set her to work chopping carrots and avocado, and by the time I had finished making my soup, she’d already filled each of the inari pouches with seasoned rice and vegetables, arranged them on plates, and taken their photo.

Japanese sushi and Indonesian soup don’t sound like they’d make a good combination, but they did. I was inspired to make this flavorful soup by a “Note from the Editor” in the current issue of Cooking Light. Editor Scott Mowbray’s description of one of his favorite comfort foods, soto ayam, an Indonesian chicken soup, had me intrigued: “a gingery curried broth, made yellow with turmeric and tart with lime.” Since the article didn’t include a recipe, I took to the internet and found that there are as many versions of soto ayam as there are regions of Indonesia.

In the end, I eliminated those that relied on coconut milk, since it wasn’t mentioned in Mowbray’s description, and took the common elements from the other recipes (minus the chicken, obviously, and the hard boiled eggs) and Americanized them when necessary. All called for lemongrass, which I currently don’t have, so I substituted lime zest. Fresh turmeric and galangal would have been preferable, but both are rarely available here, so the dried, ground versions had to do.

And instead of chicken, I used the remarkably similarly textured soy curls, a product made solely of non-GMO organic soybeans that have somehow been stretched into strands and dried. The result was an incredibly satisfying vegan chicken soup with a nice kick of ginger. My husband and I spiced up our bowls with sambal oelek, a hot chili paste, but E enjoyed the mildness of the unadulterated soup. But what she appreciated most was the inari, made with her own hands. 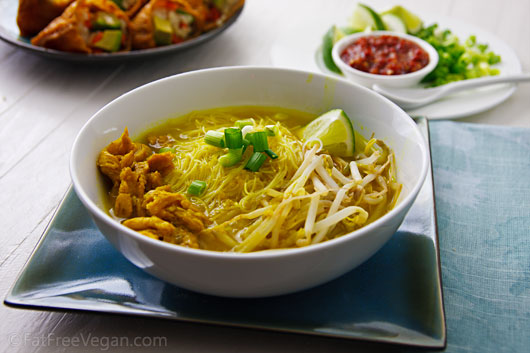 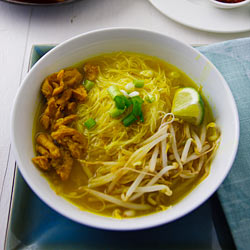 This is vegan “chicken” soup with a kick! Though soy curls are perfect in it, if you can't find them you can use strips of baked tofu, tempeh, or seitan. For a very natural version, consider edamame or, if soy is not an option, chickpeas.
Prep Time 10 minutes
Cook Time 25 minutes
Total Time 35 minutes
Servings 6
Author Susan Voisin