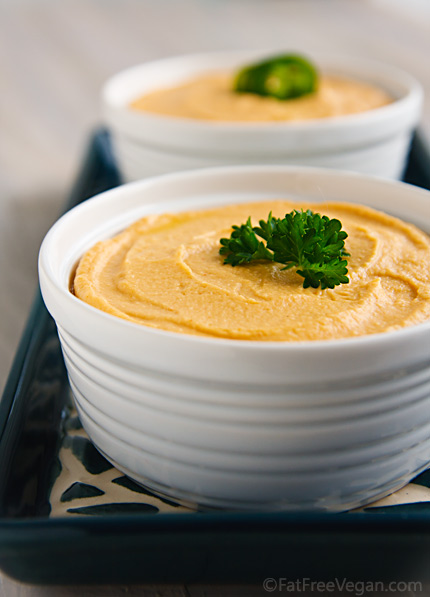 Always travel with hummus. That’s my advice to new vegans and to anyone trying to eat healthy on the road.

Having hummus in a small cooler saved us last month when my family went to New Orleans for Mardi Gras. With the streets and streetcars closed for parades, we were limited to restaurants we could walk to, and because it was Mardi Gras, all of the vegan-friendly ones that were close enough were closed.

So we ate hummus–hummus on carrots, hummus on crackers, hummus on bread. The best meal we had was hummus on a Subway Veggie sandwich; after dry bread and crackers, a sandwich with all those veggies tasted like something from a 4-star restaurant, I kid you not.

The night before my family goes on any trip, you’ll find me in the kitchen making this hummus, which takes about 5 minutes in a high-powered blender. Up until a few years ago, I always used my food processor to make it, but once I tried the silky smooth hummus that a Vitamix produces, I’ve never gone back to the processor.

The recipe is basically the same; the blender version just uses more liquid to get the blades moving, but somehow it comes out as thick as the food processor version. And the best part: if you want, you can use whole sesame seeds instead of tahini. The blender grinds them as it makes the hummus. 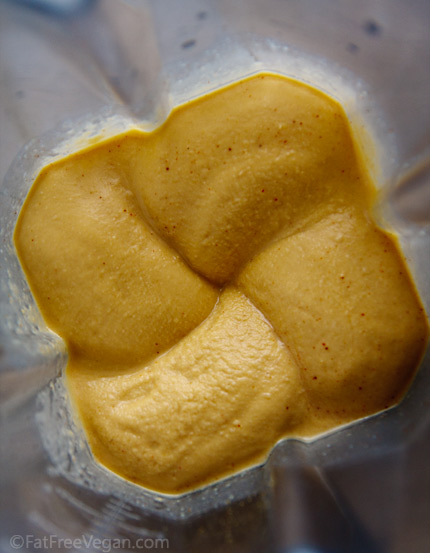 Hummus in the Vitamix

If you don’t have a high-speed blender, you can make my basic hummus in a food processor. Start by chopping the garlic first, and use only 1/4 cup of liquid. Bryanna Clark Grogan says that you can get silky smooth hummus from a food processor if you start with warm chickpeas, so if you cook your own beans, I recommend that.

I like to make a a mildly-seasoned hummus for general use (and my daughter’s taste), and then scoop out half of it, add additional seasonings to the Vitamix, and blend. Since the seasonings I like to add are usually spicy, I garnish the “doctored” hummus with slices of jalapeno to let my family know which container holds the fiery hummus. The amounts of seasoning in the recipe below are conservative, so feel free to add more to taste.

I have over a dozen flavors of hummus and hummus-type dips and several recipes where hummus is an ingredient. Find them all here. 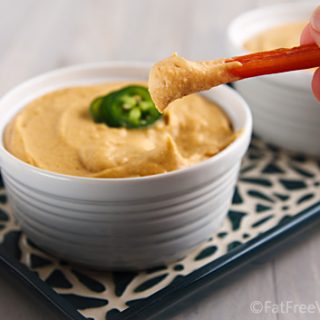 Hummus in the Blender

You can make this with either canned or home cooked chickpeas. If you’re using canned, I recommend using organic beans. Drain the liquid from one of the cans, but leave the other undrained and use its liquid instead of the water. If you’re using home cooked chickpeas, you may need less water so start with barely 3/4 cup and add more if the hummus is too thick.
Prep Time 10 minutes
Total Time 10 minutes
Servings 8
Author Susan Voisin

If using home-cooked chickpeas, use 3 cups chickpeas and 3/4 cup chickpea broth or water.

P.S. I’m on the road again as I write this, so it may take me a little time to approve and respond to your comments. Rest assured that I have a big tub of hummus in the ice chest! 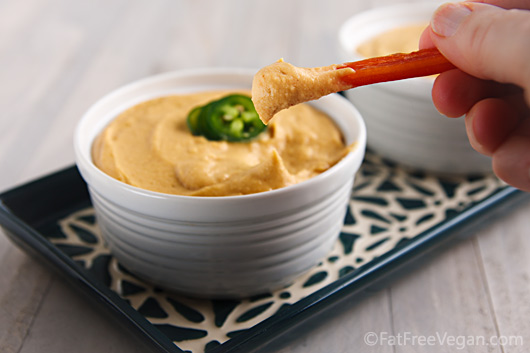