Jackfruit adds moisture and a pull-apart texture to these incredible seitan-based vegan ribs. No one will believe they are fat-free! 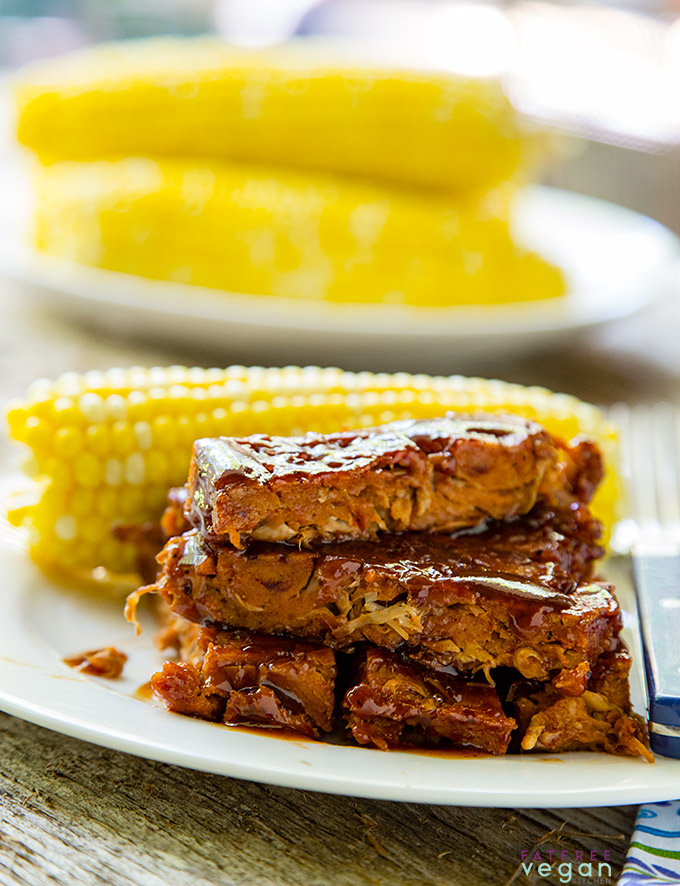 I wish I had an interesting story behind this recipe, but the truth is, I saw a photo by Lacey, the blogger at Avocados and Ales, of seitan-jackfruit ribs in the very popular Facebook group “What Fat Vegans Eat” and just had to have some.

The texture looked so realistically “meaty” that almost as many of the group members were turned off by it as were tempted. You know vegans–we’re all different, and for every one disgusted by anything with the texture of meat there’s an equal number of us salivating over it. I have no problem with a meaty texture as long as no animal had to suffer for it, so I was immediately intrigued.

The idea of jackfruit-infused ribs stuck with me even though I had forgotten which group I’d seen the photo in. (Thanks, Lacey, for reminding me!) So I had to make up my own recipe, using my much-loved Barbecued Seitan Ribz as a base.

It took two attempts to get the texture just right, so my family has eaten a lot of barbecued ribs this week–and they are overjoyed! Homemade seitan is a rare treat in our house, and we devour even double batches of ribs as quickly as I can bake them.

Since adding jackfruit to my basic BBQ ribs recipe requires an additional cooking step, I saved a little time and bother by making them totally in the oven–no need to get out the grill. And because jackfruit adds so much tenderness, I was able to skip the nut butter, so there is no added fat in these ribs, yet they’re a little more filling than basic ribs.

Here’s how to make them:

Watch my quick video to see how easy they are to make. 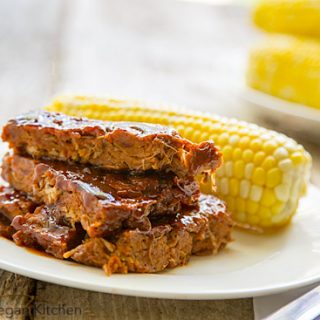 Make sure you buy young green jackfruit in water or brine, not sweetened jackfruit. You can find it in 20-ounce cans in Asian grocery stores for about $1.50 per can. I find that a 20-ounce can yields 10 ounces of jackfruit once it is drained. Brands of jackfruit vary. Some can contain pieces that are tougher than others and may require additional cooking time or even chopping with a knife. Of the brands I've tried, I have found Chaokoh to have the most tender jackfruit. *Calories, sugar, sodium, as well as other nutritional data will depend on the exact brand of barbecue sauce used.
Nutrition Facts
Jacked-Up Vegan Ribs
Amount Per Serving (4 ribs)
Calories 298 Calories from Fat 18
% Daily Value*
Fat 2g3%
Carbohydrates 32g11%
Fiber 1.5g6%
Sugar 16g18%
Protein 35g70%
* Percent Daily Values are based on a 2000 calorie diet.

Happy Fourth of July to those who celebrate it!