Eating soup as or before a meal can promote weight loss, but what if you’re not watching your weight? No matter what your diet needs, soups are one of the healthiest things you can eat. 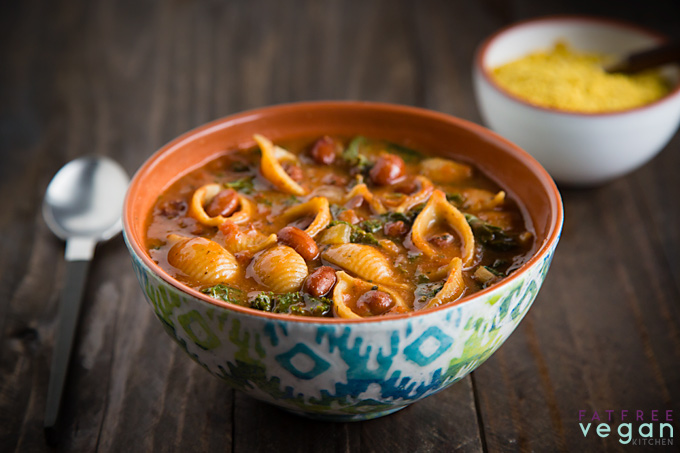 I love soup, especially during cold weather. In the winter, about every other meal I make centers around soup. I tend to favor thick, chunky, meal-in-a-bowl soups, primarily because I’m too lazy to make lots of different courses. But if I had all the time and energy in the world, I would like nothing better than to start every meal with a light, vegetable-based soup. 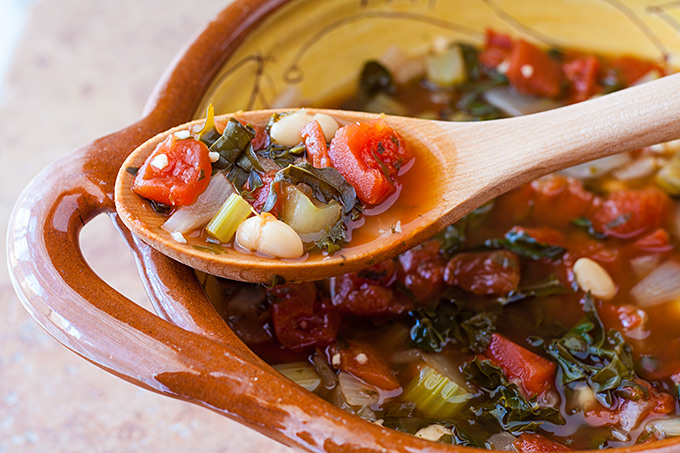 As it turns out, both hearty soups and brothy ones can be valuable tools to those of us who are trying to lose weight. Researchers have found that people who begin their meals with a simple vegetable soup eat about 20% fewer calories than those who don’t. It doesn’t matter if the soups are chunky or pureed, only that they’re low in fat and calories (no cream soups). The water content of the soup is the key–it adds volume to fill you up. If you think you can get the same effect by having a glass of water with your meal, think again; the phenomenon seems to work only when the extra water is part of the dish. 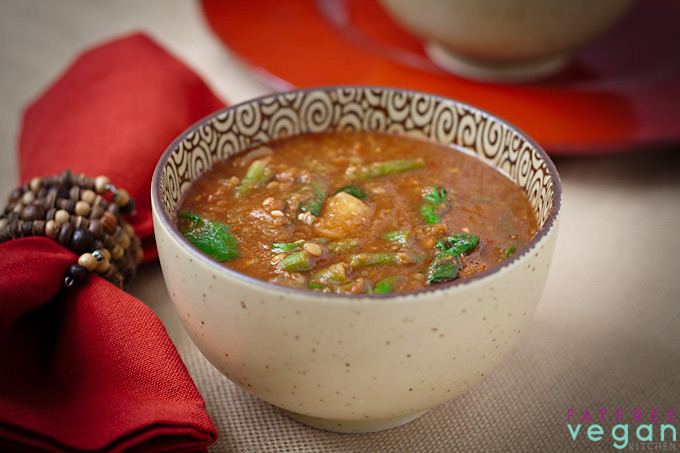 Main-dish soups are also great for dieters. Adding some beans or other high-protein ingredients increases the soup’s “staying power”–the length of time it satisfies your hunger–and turns it into a one-pot meal. Soups that are already protein-heavy, such as split-pea or lentil, can be lightened up with the addition of vegetables or can be served as the main dish along with salads or other vegetable sides.

Eating soup for weight loss is fine, but what if you’re not watching your weight? No matter what your diet needs, soups are one of the healthiest things you can eat. Cooking vegetables in a soup releases nutrients into the broth, making it rich with vitamins and other nutrients. And by pureeing a soup, you can increase the amount of vegetables you eat in a meal without having to eat until you’re stuffed. 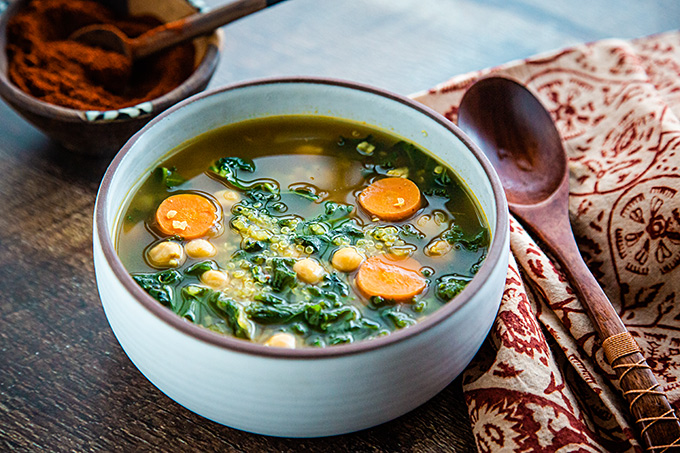 Since I started writing this blog, I’ve made a lot of soups (70 as of January 2013!), and many of them have become staples in my family’s diet. Though it’s one of my newest creations, North African Chickpea and Kale Soup quickly became one of my family’s favorites; it packs an amazing amount of nutrition and flavor into a quick-cooking soup. Among my old favorites is Ethiopian-Inspired Red Lentil Soup, a hearty, filling soup that will leave no one hungry. What both these soups have in common is that they rely on blends of spices that some people might call exotic. I believe that creative seasoning is what makes soup worth eating; you could make a soup with the same basic ingredients over and over again but if you vary the spices, it’s a different soup every time. 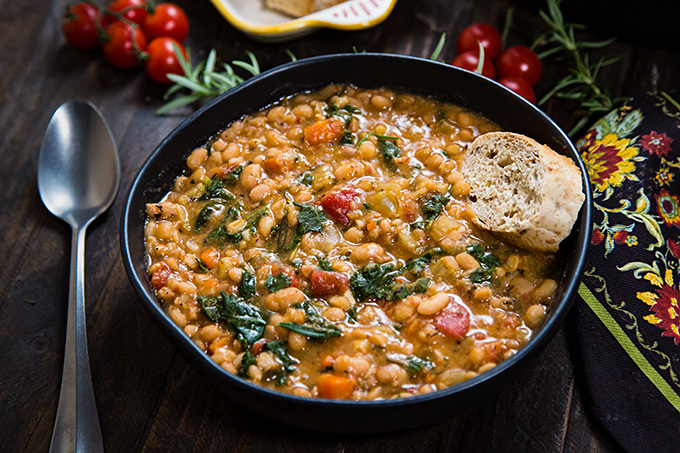 Now, having said that, I have to admit that the soup that I make on a weekly basis–my go-to meal when I’m in a hurry or lacking inspiration–is neither “creatively seasoned” nor varied. It’s actually…embarrassing.

At least one night a week I throw together this soup that doesn’t even need a recipe because it’s concocted entirely from packaged ingredients. Shocking! I keep all the ingredients on-hand so that I can make this whenever the need arises–once I actually served it to guests, when they arrived too late to take out to dinner. They liked it so much they even asked for the recipe. I wasn’t about to give it to them, but I’ll let you in on the secret.

And if you have a pressure cooker, be sure to check out the Instant Pot version. 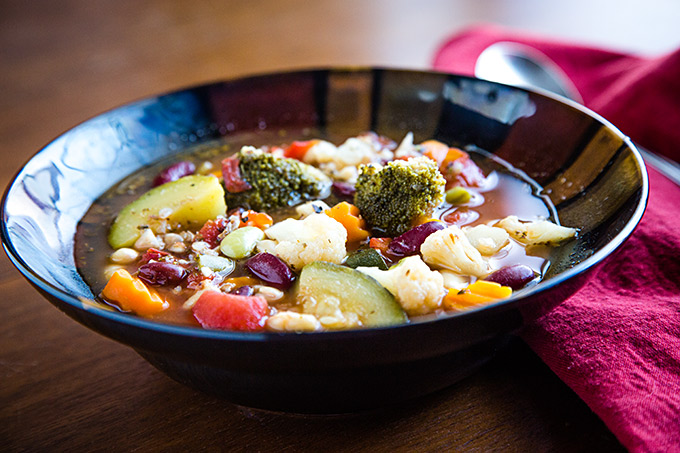 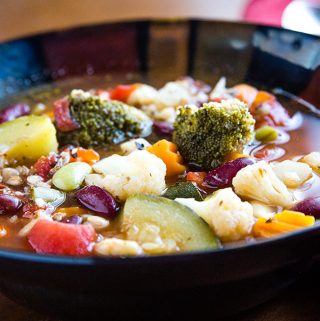 You can make a nutritious and delicious soup in no time using frozen vegetables and canned beans. Some people eschew frozen vegetables, but they are often more nutritious than fresh ones that have been shipped from far away. They’re usually flash-frozen at the farm, resulting in more nutrients being preserved; vegetables that are allowed to age before cooking lose some of their nutritional value.
Prep Time 10 minutes
Cook Time 30 minutes
Total Time 40 minutes
Servings 8
Author Susan Voisin

Course Main Course, Soup
Cuisine American, Vegan
Keyword instant pot soup
Have you made this recipe?Mention @SusanFFVK and tag #fatfreevegankitchen in your photos on Instagram.
Share on Facebook Pin This Recipe Share by Email

Find all of my soup recipes here!

There are so many delicious soup recipes on other blogs that no one should ever have to go without soup. Here are a few I’ve added to my “must-try” list (adapted as necessary to be fat-free and vegan):