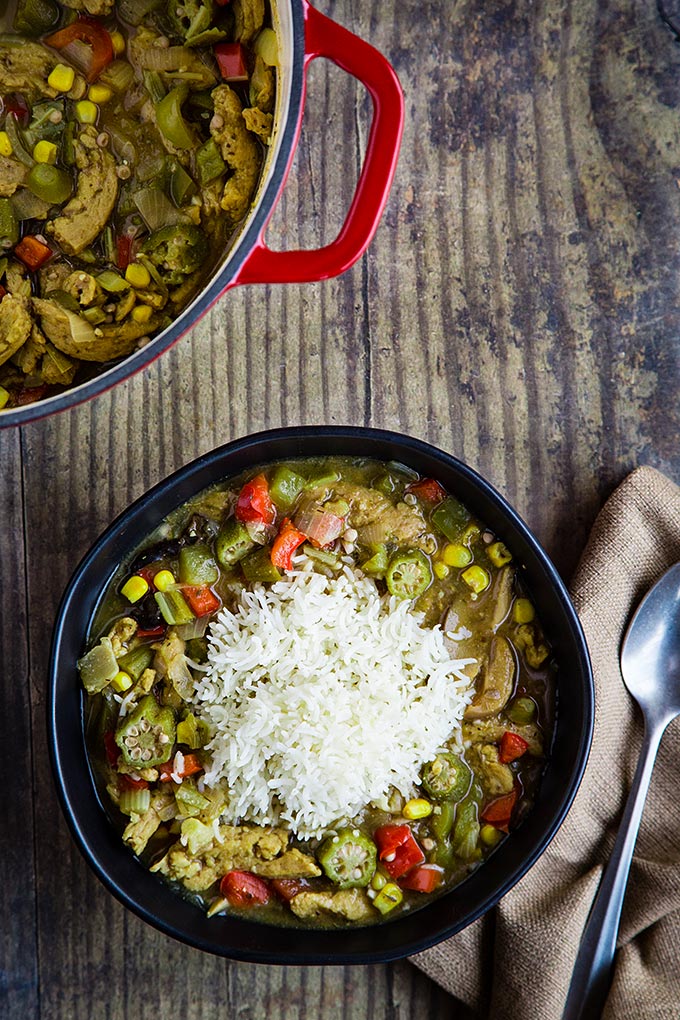 Spicy and hearty, this vegan chicken gumbo will satisfy your craving for Cajun food with no added fat. This is one of those dishes that improves with age, so consider making it a day ahead of serving.

A couple of weeks ago, my husband suggested I make our normal chicken soup with soy curls, but I was in the mood for much spicier food. So I compromised and made a vegan “chicken” gumbo using soy curls and frozen vegetables. It came out so good that I took a photo of it and posted it to Instagram, with the question, “Can you find gumbo and mirepoix frozen vegetable mixes where you live?”

As I was afraid, most people outside the South and Southwest don’t have access to these particular frozen vegetable blends. So I got to work chopping, weighing, and measuring fresh vegetables to approximate the amounts of frozen I had used, so that I could post a recipe everyone could use.

It wasn’t easy, and in the end I wound up using frozen versions of corn and okra because most people seem to be able to find those separately. In the end, my mostly-fresh version of vegan chicken gumbo came out tasting pretty much the same as my frozen version, though the chopping adds a good bit of preparation time. On the plus side, the fresh bell peppers look much prettier than the ones in the frozen mix. 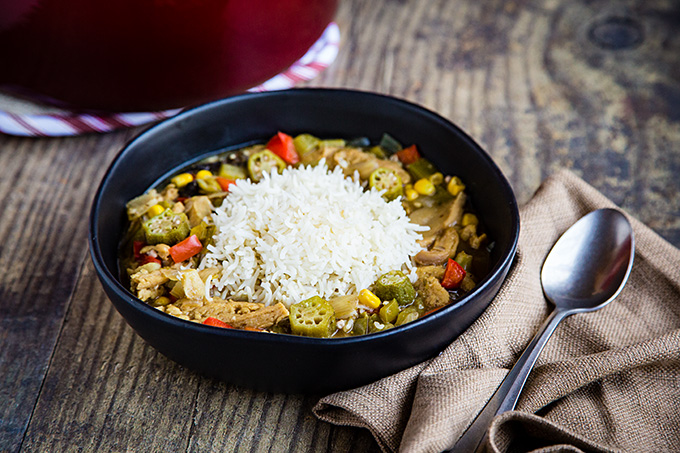 To make an authentic gumbo, you need to use a roux. Roux provides flavor and thickness to gumbo, but normally it’s made by cooking flour in fat. But you can get a similar rich, smoky flavor by browning the flour in a skillet without all the fat and calories of a traditional roux.

It takes a little patience to brown flour for roux, and the hardest part is knowing when to stop before it’s burned. So I made a video in which I actually speak (surprise!) to guide you through the process:

You’ll probably be surprised to see dried mushrooms in gumbo, but I love the chewy texture they add. I bought a huge bag of mixed dried mushrooms from Amazon (thanks for the tip, Christine), and I’ve been adding them to a lot of things. For this gumbo, I didn’t even soak them first, just rinsed them well and let them soften in the gumbo.

Of course, you could also use any dried mushrooms, or fresh mushrooms, or just leave them out completely if you don’t like mushrooms. It shouldn’t affect the outcome of the gumbo. If you use fresh, I suggest using about 4 ounces.

I loooooove soy curls as a meat substitute. I buy them in bulk online and keep them in the freezer for meals such as this. You may notice that I added them dry rather than re-hydrated. I like the way they pick up the flavor from the gumbo as they cook when they start off dry.

You could also add other vegan proteins to this gumbo, if you use them. Packaged or homemade vegan sausage would be delicious. 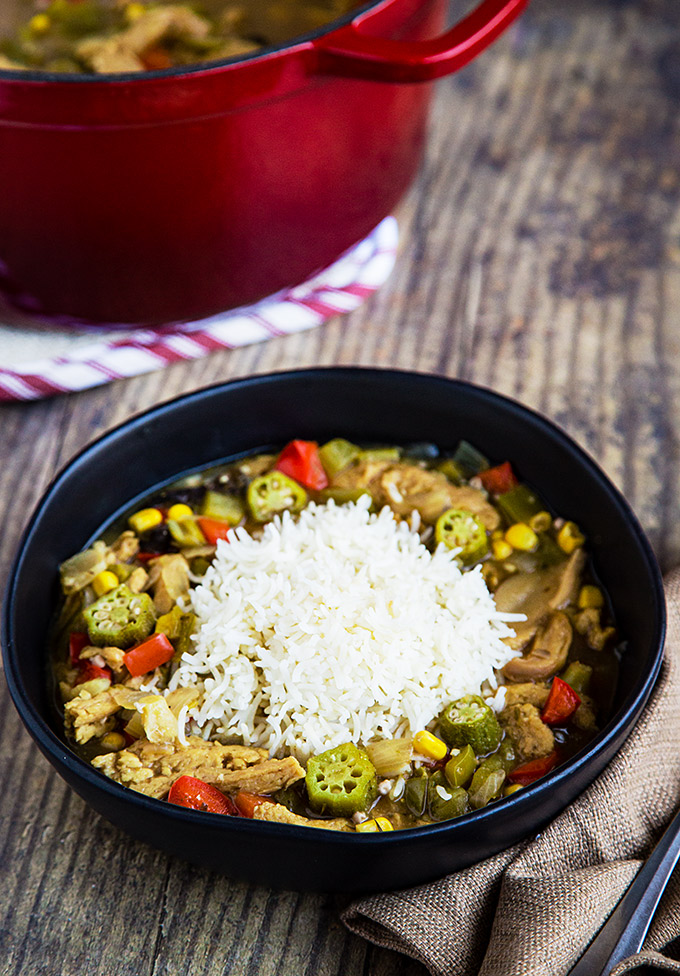 I know someone’s going to ask me about making this in the Instant Pot. I prefer the flavor of the gumbo when it has a chance to simmer uncovered (and it’s also amazingly better the next day.) But if you want to try it in the IP, I suggest using the sauté mode to do the first step, cooking the onion, peppers, celery, and garlic, and then cooking it at high pressure for about 10 minutes. I would also decrease the water from 4 cups to 3 and add more at the end if necessary. Perform a quick release.

You can find more of my low-fat, vegan Louisiana-style recipes in my Louisiana Recipes archive. Some of my favorites are 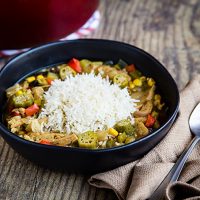 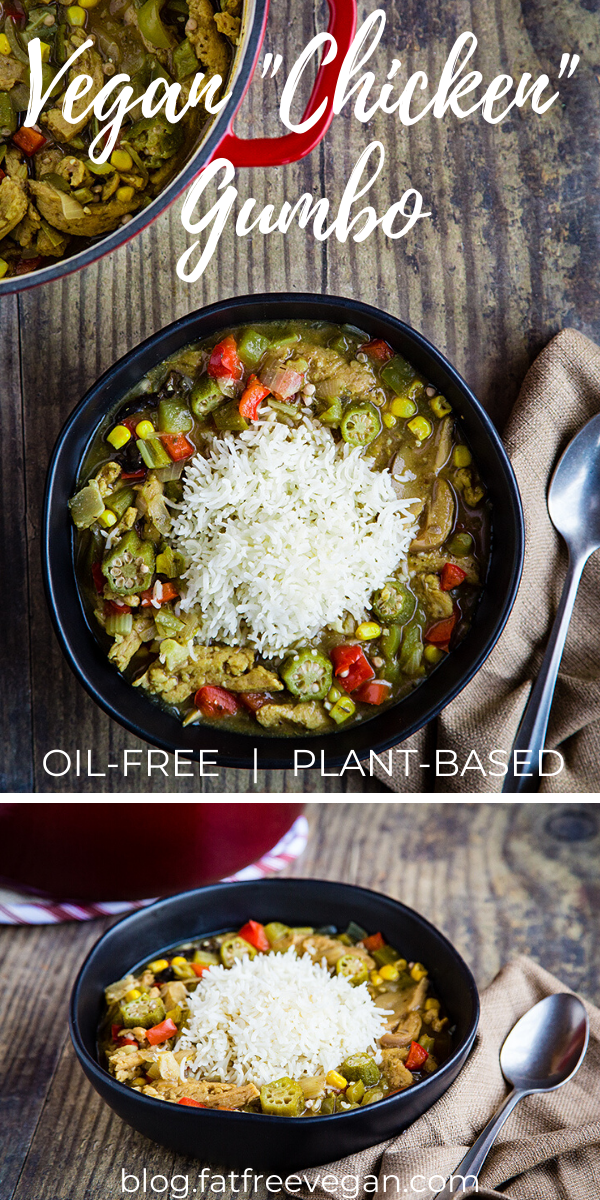